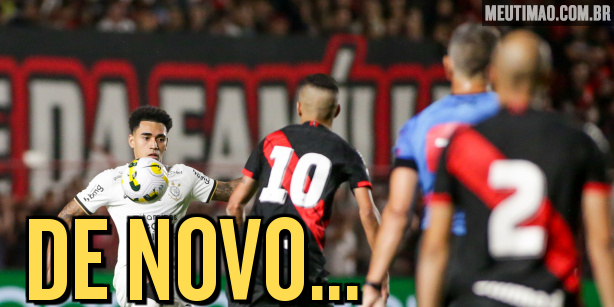 Midfielder Du Queiroz, created by Corinthians, received a threat on social media after the team’s defeat in the first leg of the quarterfinals of the Copa do Brasil. Timão was overcome by Atlético-GO by 2 to 0.

The player published the threat on his official Instagram profile through the platform stories. In the messages, the user addresses Du Queiroz with words such as “little leg”, “vagabundo” and “favelado trash”, in addition to writing “go to die” and “I want to see if you have a steel chest” – see post below.

Still in the publication made, Du Queiroz replied to the man who sent him the insults and threats. “I’m a favelado, and I’m not going to keep silent anymore in front of some stops like this! I’m a man, I have a family to support”, wrote Du.

The man who sent messages to the athlete was quickly identified by the crowd. Some of the fans even made comments in the citizen’s publications rejecting the attitude.

Du Queiroz was one of Corinthians’ holders this Wednesday. The midfielder, who was revealed by the club’s youth categories, has been having great moments with the Corinthians shirt and has become one of the main names in Timão’s midfield.

In the current season, Du Queiroz was on the field in 41 opportunities. The athlete contributed to 19 wins, 12 draws and ten defeats, having scored one goal so far. The goal, by the way, was his first for the professional against Boca Juniors, still in the group stage of Libertadores.

This is not the first occurrence of threats to Corinthians players in 2022. Goalkeeper Cássio, one of the club’s biggest idols, was threatened through his family. Midfielder Willian and defender Gil also suffered threats on social media. In the case of Cássio, the author of the messages was identified by the police.

Previous The Princess: Documentary about the life and death of Lady Di gets first trailer with never-before-seen archive footage
Next Sony announces PlayStation controller for iPhone