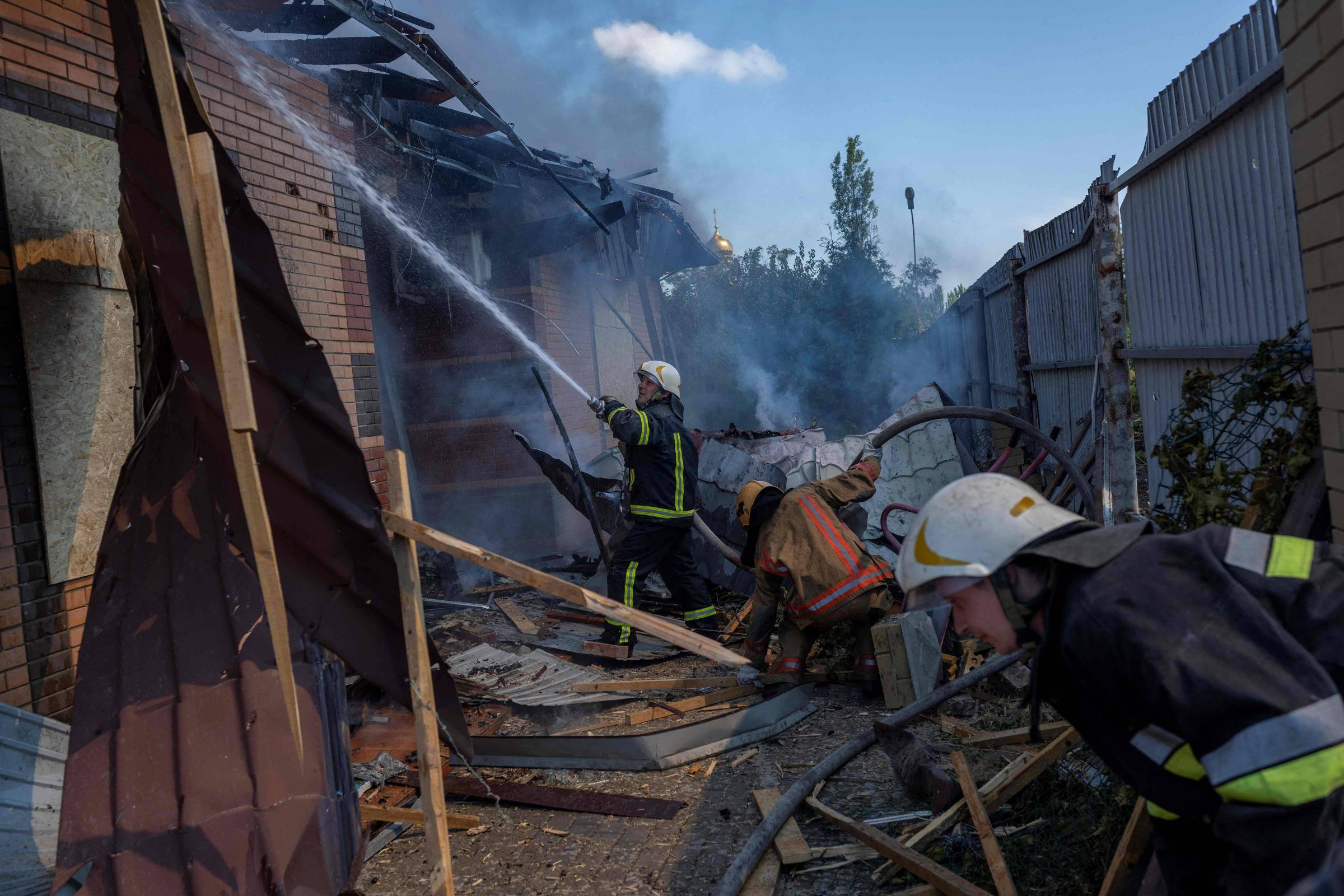 After a relative tactical pause, the Ukrainian War entered its third major phase. Kiev expanded the movements of its first counteroffensive, while Moscow resumed the advance in the east and greatly intensified its missile attacks on Thursday (28), the 155th day of the Russian invasion of its neighbour.

There hasn’t been such dynamics on the battlefield since Russia ended its conquest of Lugansk, one of the two provinces that make up Donbass, the Russian-speaking east of the country, just over three weeks ago. From then on, the war obviously continued, but with specific actions.

Now Ukraine is working to isolate Russian forces in Kherson, the first major city conquered by Moscow at the very beginning of the war. A port in the south of the country, it is the capital of the homonymous province, whose Russian control established a bridge between Donbass and Crimea, annexed by Vladimir Putin in 2014.

It’s a race against time, according to the Ukrainian Armed Forces, which register Russian reinforcements arriving in the region. This week, Kiev intensified actions against the main bridge connecting the city to the rest of the province, separated by the Dnieper River. Here, a strategic dilemma and a tactical limitation come in at the same time.

The bridge in question, Antonivski, is 1 km long. It had the runway damaged with the use of western long-range artillery donated to the Ukrainians — for the accuracy of the offensive, probably by Excalibur GPS guided ammunition, fired by howitzers, not the famous Himars system missiles.

The Russians say they have established pontoons and a ferry crossing as an alternative, but they are vulnerable in Kherson, at risk of becoming isolated. Losing the city would be a major strategic defeat for Moscow’s now explicit claim to conquer its neighbor’s south.

As usual in the war of narratives, Western sources take the Russian situation for granted. The British Defense Ministry says that Moscow has lost its momentum in the south permanently, which is an exaggeration for now.

Then comes the dilemma for Kiev: if it wants to retake Kherson, it will have to bomb it intensively. Merely isolating the Russians does not suggest that they will leave. But the city is still inhabited by its citizens: before the war, there were 283,000 residents there.

This is the tactical limitation of Western weapons. They gave a new operational capability to the Ukrainians, hitting ammunition depots and Russian positions up to 70 km away, but they are useless for occupying a city unless used to destroy it first. Even the refusal so far to blow up the Antonivski bridge or the other one further up the same river passes through this logic.

There are also doubts about the strength of the Ukrainian Army to mount a counteroffensive on the ground, given that it received few armored vehicles and tanks compared to the losses it has had so far. The next few weeks will tell the real condition of the counteroffensive.

The Russians, for their part, have since the weekend resumed pressure on the remaining portion under Kiev’s control in Donbass, in Donetsk province. Since 2014, when Crimea was annexed in retaliation for the overthrow of Ukraine’s pro-Russian government, the area has fallen into civil war and has been divided between Ukrainians and Moscow-backed separatists.

These pro-Russian troops participate in an attack on Adviivka, the frozen front line in Donetsk, next to the province’s eponymous capital. As Igor Girkin, a former military commander in the region and now a critic of the conduct of the war, stated in the Telegram, direct assault has everything to go wrong.

A similar assessment is made by the Institute for War Studies in Washington. The center says it believes that Russia only has the strength for this action and another, so far successful, which took over the Vuhleriska thermal power plant, on the border between Donetsk and Lugansk. Indeed, the Russian Wagner mercenary group, not regular troops, were employed there for the first time in a major action.

In any case, the Russians increased their air strikes on Thursday, which could be a diversionary tactic to withdraw Ukrainian commitment in the south or a harbinger of a more sustained resumption of the campaign. On Sunday (24), Chancellor Sergei Lavrov said with all the letters that the objective, after all, is to overthrow what he called the “unacceptable regime” of Volodymyr Zelensky.

From Crimea, missiles were launched that destroyed a military base near Kiev in Liotij. According to Oleksii Gromov of the Ukrainian General Staff, there were several casualties. More significantly, from Russian bases in Belarus, 25 missiles were launched against positions in the Chernihiv region, the scene of bloody battles at the beginning of the conflict.

Gromov assesses the situation in Donetsk as “quite difficult, but still under control”. The United States has already promised to send more Himars missile systems — so far, 12 have been delivered to the Ukrainians — and other NATO countries, the Western military alliance, continue to drip weapons here and there to Kiev.

Roughly speaking, the Ukrainian War can be divided into a first phase, in which Putin tried to take Kiev with a multi-pronged attack and little firepower focus. He thus faced Ukrainian resistance and failed. From there the conflict moved to its source, Donbass, where in April the Russians began their new campaign, the most successful so far, despite doubts about the ability to take the entire province of Donetsk. Still unfinished, this second phase is superimposed by the third.

Previous Electronics for up to R$100 on AliExpress
Next “Blonde” Enters the Venice Film Festival’s Main Competition; check full selection