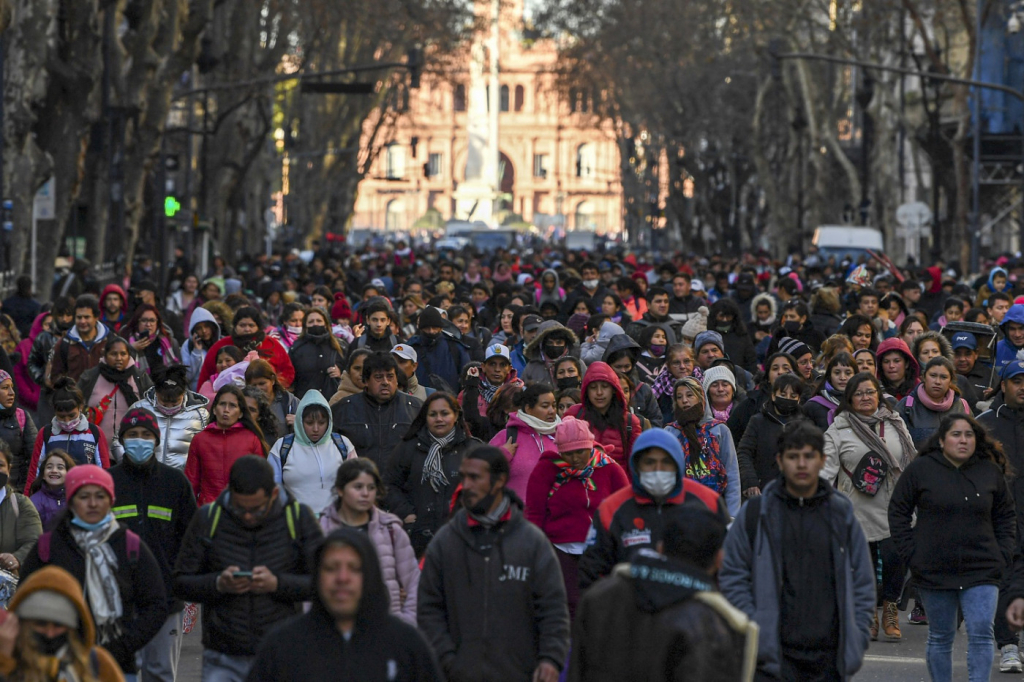 In an interview with Jovem Pan, Roberto Luis Troster spoke about the crisis in the neighboring country, which records annual inflation above 60%

Luis ROBAYO / AFPProtests against the crisis were held this Thursday, 28

After the resignation of the Minister of Economy Silvina Bartakisthe government of Argentina announced a new ‘super-minister’ and raised the basic interest rate by 8%, raising it to 60%. The name chosen was Sergio Massa, president of the Chamber of Deputies. He will not only be Minister of Economy, but also Minister of Production and Fisheries. The Argentines took to the streets on Thursday (28), to protest against the socioeconomic crisis in the country. In an interview with Morning newspapergives Young pan, this Friday, 29, economist Roberto Luis Troster spoke about the crisis in the neighboring country, saying that Argentines face three crises at the same time. “There are three crises together: a political crisis, a government with low legitimacy that is putting in an economy minister who was a candidate for president and has presidential ambitions. In addition to the political problem, there is the social problem. Poverty creates a demand for very large social spending. And there is the economic problem, which is, on the one hand, in the financial market. In Argentina, you work with three different currencies: the peso, the official dollar and other dollars. They are trying to hold the outflow of dollars and increase the inflow. Agribusiness, for example, which is the major contributor of dollars, what does it do? Hold exports to be able to wait for the dollar to rise even more. The new minister raised transport tariffs, said he would cut spending. You have to wait and see if he can get that.” Troster said.

At another time, the economist mentioned that both Brazil like Argentina suffer from the same problem of thinking about “putting out fires” and not thinking about the future. “Both there and here, they are only concerned about arriving at the end of the month, here at the end of the year. Brazil and Argentina have a lot of potential. They have people, natural resources, infrastructure and everything to grow a lot. But here they ask ‘what will be the GDP and inflation this year’ instead of thinking about ‘how much will we grow in 2032’, think about the future. We focus on the short term and don’t see potential in the long term,” he concluded. On Thursday, protests were organized by organizations and leftist movements demanding a universal basic salary, which would correspond to 3,000 pesos, the value of a basic food basket in Argentina, and a bonus of 20,000 pesos for retired people. Protesters were also opposed to the Central Bank’s decision on a soybean dollar, a measure proposed by the Bank to liquidate soybeans and obtain 2.5 billion dollars to fill the country’s foreign exchange reserves. Inflation rose 5.3% in June, which also sparked protests. Within this inflation, the sectors that suffered the most were footwear, clothing, food, health, water and electricity. In food, the ones that increased the most were sunflower oil, milk and lettuce.

Check out the full report:

Previous Flip 6: JBL sound quality but not too many extras | Analysis / Review
Next Harry Shum Jr. Joined the cast of season 19 of Grey’s Anatomy