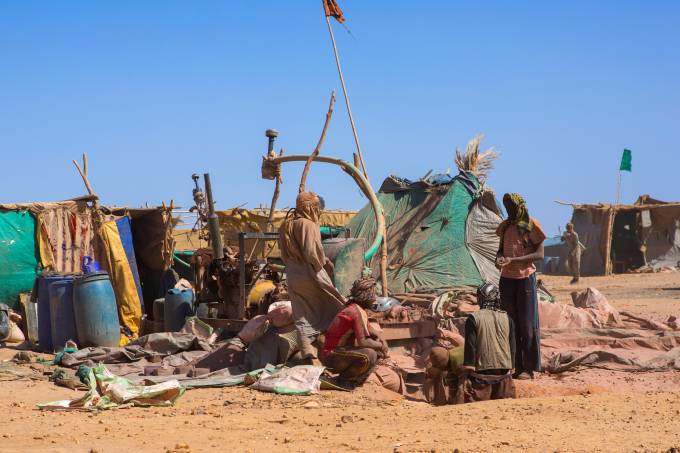 THE Russia has plundered the gold of Sudan to boost their war efforts against Ukraineusing it to survive the series of sanctions applied by western countries and led by the United Statesaccording to a news report CNN.

At least 16 gold smuggling flights have left the country, Africa’s third-largest producer of the precious metal, heading to Russian territory in the last year and a half. According to CNN, official Sudanese and American sources, in addition to analyzed documents, point to an elaborate scheme to plunder Sudan’s riches in an attempt to strengthen Russia against Western sanctions.

+ Russia warns US against ‘provocative’ moves towards China

Evidence also points to the Kremlin colluding with the beleaguered Sudanese military leadership, allowing billions of dollars in gold to bypass Sudanese territory, depriving the poverty-stricken country of hundreds of millions in state revenue.

In return, the Russians have lent powerful military support to Sudan’s unpopular military leadership, which has violently repressed the pro-democracy movement. According to current and former US government officials, Russia actively supported the African country’s military coup in 2021, which overthrew the current transitional government.

“We have known for a long time that Russia is exploiting Sudan’s natural resources. To maintain access to these resources, Russia encouraged the military coup. They provided everything from training and intelligence support to a share in the profits from the looted gold,” says one of the unnamed former US officials.

At the center of the scheme is Yevgeny Prigozhin, the Russian oligarch and key ally of President Vladimir Putin. The 61-year-old, heavily sanctioned by the West, controls a network of companies that includes a paramilitary group allegedly linked to mass torture, murder and looting in several countries on the African continent.

In Sudan, Prigozhin’s main outlet is a US-sanctioned company called Meroe Gold, a subsidiary of Prigozhin-owned M-invest, which mines gold while providing weapons and training to the country’s army and paramilitaries, according to documents. analyzed.

“Through Meroe Gold, or other companies associated with the oligarch’s employees, a strategy was developed to plunder the economic resources of those countries where they operate, in return for their support to the governments in force,” said an investigator from Dossier Carter, who tracks the criminal activity of several people associated with the Kremlin, Denis Korotkov.

+ Military coup and arrest leaders of the transitional government in Sudan

The researcher also points out the importance of the figure of Alexander Sergeyevich Kuznetsov, a high-level agent of the paramilitary group, who supervised operations in Sudan’s main gold mining, processing and transit sites in recent years. He, who is a convicted kidnapper who fought in neighboring Libya, was awarded Russia’s Order of Courage four times and was photographed alongside Putin in 2017.

Russia’s meddling in Sudan’s gold began in 2014, shortly after the annexation of Crimea, which prompted a series of Western sanctions on the country. Gold remittances have proven to be an effective way of accumulating and transferring wealth, bolstering Russian state coffers and bypassing international financial monitoring systems.

The center of Russia’s gold mining operation lies deep in the desert of northeastern Sudan, a bleached landscape dotted with chasms where miners work in the scorching heat, with only tents made of scrap canvas and sandbags for some respite.

Gold is sold in a haphazard fashion near a processing plant known locally as “the Russian company”, being the nerve center of the scheme. According to CNN, about 85% of Sudan’s precious metal is sold this way, and most transactions take place off the books in a market dominated by Russia.

For at least a decade, the Kremlin has hidden its Sudanese gold business from the official record. Official Sudanese foreign trade statistics since 2011 list total exports of the precious metal to Russia at zero, despite abundant evidence from Moscow’s extensive negotiations in this sector.

As the Russian government has benefited from blind spots, it is difficult to say clearly how much the country has profited from the negotiations. A spreadsheet obtained from a Sudanese Central Bank official, however, points out that 32.7 tonnes of gold were not accounted for in 2021, which is equivalent to US$1.9 billion in lost product.

+ Despite the energy crisis, EU renews sanctions against Russia until 2023

According to most sources, around 90% of Sudan’s production is smuggled, meaning that more than $13.4 billion was swindled and lost in eventual government revenue.

Previous Does it make a difference to take a photo with a cell phone upside down?
Next Vampire Academy: premiere date, trailer and everything about the series