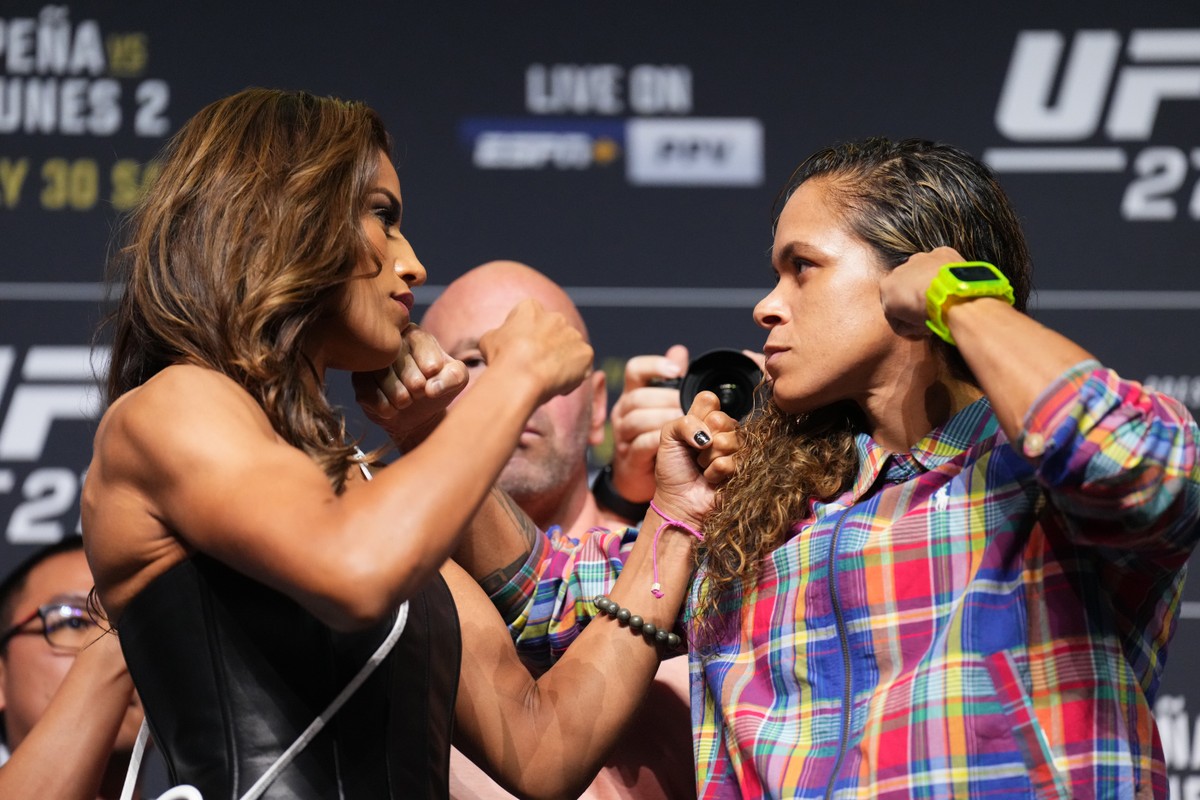 The UFC 277 press conference, held this Thursday with all the members of the main card of Saturday’s event, in Dallas, was in an atmosphere of provocation between the bantamweight champion (under 61.2kg) Julianna Peña and the now challenger Amanda Nunes. In the final stare, tension was in the air under Dana White’s watchful eyes, but neither of them hinted at anything more aggressive.

– Honestly, the way I lost, I couldn’t accept. So I came home and had to do it all over again. I made all the adjustments and changes I had to make. I want my belt back. That’s what I love to do. And I can’t retire like that. That’s my main reason. I took this fight, I want to be there 100% and do my best. And being a champion is really good, I know what she’s feeling right now. I’m still a champion, I know that feeling. So I want to be the double champion again. That’s my big goal. I went back to the gym, corrected a lot of things and came back here. Saturday I’ll see you guys there having my opportunity to get my belt back – Amanda said about the motivation to seek the rematch and regain the title.

Amanda preferred not to delve into Julianna Peña’s stance, which, unlike the previous fight, had been less provocative so far.

– Honestly, that’s strategy. She does what she wants. I have to keep my mindset. That’s what I want to do, get my belt back, so I keep my focus on getting my belt back (…). This is the biggest fight of all time, I’m going to be a two-time champion again. What’s more exciting than that? So I’ll see you on Saturday,” Amanda said, to a standing ovation from the audience.

Julianna Peña, who tried to be less provocative in promoting this second fight, started to loosen up more when asked about Amanda at the press conference.

– Fedor Emelianenko has an aura. Mike Tyson has an aura. Dana White has an aura. I don’t know about this aura you speak of Amanda Nunes, I don’t see it (…). All real fights are 135 (pounds, bantamweight), she’s saying she’s going to fight at 145 (pounds, featherweight) and defend the belt, but against whom? Mention two (fighters) of 145, there is no one in that category, everyone knows that the real fights are in 135 pounds – shot Julianna, after the Brazilian stated that she will defend the featherweight title shortly after the rematch on Saturday.

Alexandre Pantoja, the other Brazilian present at the UFC 277 press conference, and who faces Alex Perez at flyweight in the fight that opens the main card, provoked Brandon Moreno and Kai Kara-France with few words. He has already won both, but will fight before the two and out of contention for the interim title of the category.

– I’m a good father and I’m here with my children – fired the fighter from Arraial do Cabo.

Derrick Lewis, despite being questioned only once, showed his charisma with fans. The American heavyweight even joked by asking that the question be asked in Spanish and not in English. When the reporter did so, Lewis called him a “fucking idiot” in Spanish, drawing laughter from the audience. And at the time of the confrontation between Lewis and Sergei Pavlovich, the American played a prank on Dana White, who thought he would go after the Russian.

Next Saturday, the Combat broadcasts “UFC 277” live and exclusively from 19:00 (Brasilia time). O combat.com transmits the “Combat Warming” and the first two fights from 18:30, as well as the SportTV 3 it’s the Combat YouTube. The website follows the event in real time.