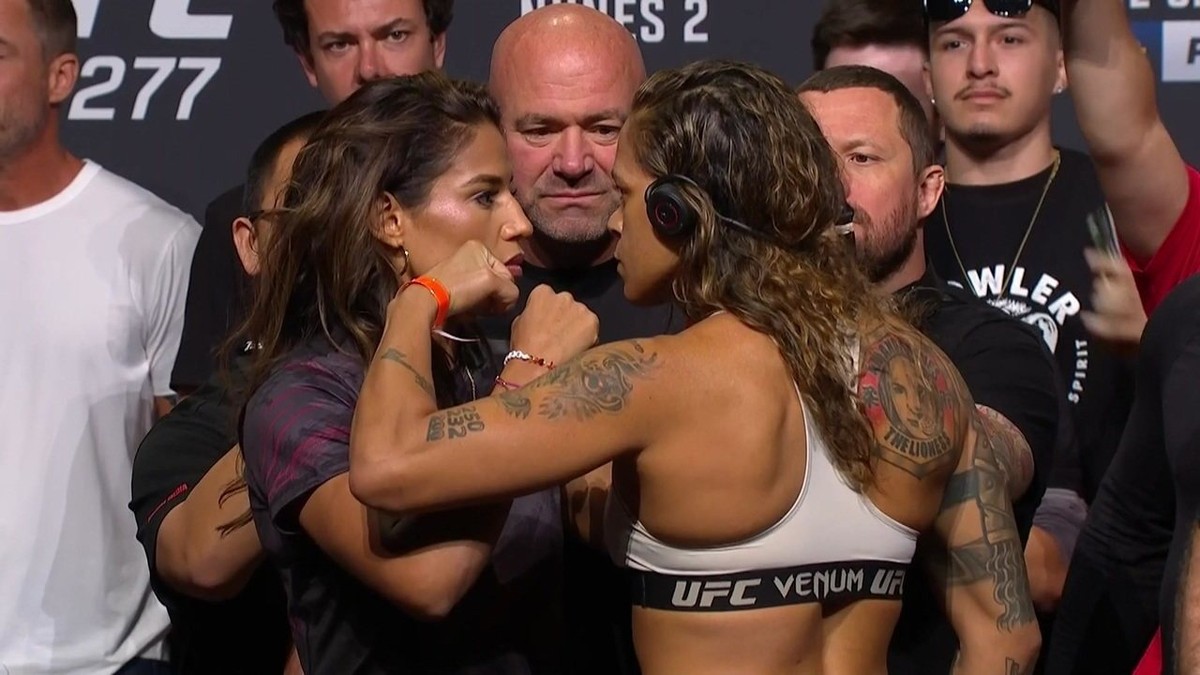 The “lioness” is bitten and determined to regain the bantamweight belt (61.2kg). That’s the impression Amanda Nunes gave at the ceremonial weigh-in at UFC 277, this Friday, in Dallas. In the last match against Julianna Peña, who defeated her last December to become champion, the Brazilian fighter put her left fist in the American’s face and assured the public: the belt will return to Brazil.

– Life is like this: sometimes, not everything goes your way. That’s why I’m back here, to regain my title on Saturday. Watch tomorrow (Saturday): I’m going to become double champion again! – said firmly, the Bahian, who is also the UFC featherweight champion (65.8kg).

Amanda took the stage wearing sunglasses and headphones, followed by wife Nina Nunes and daughter Raegan. She went straight to the scale, showed the muck and positioned herself for the glare. Julianna emerged much calmer, also accompanied by her daughter, and calmly took off her glasses and sweater before stepping on the scale.

At the time of the stare, Amanda took off her sunglasses and went over to Peña. The “Lion” raised her left fist and went for the defending champion, who raised her guard, and looked her intensely in the eye. UFC president Dana White ordered the two to drop the pose and head for the post-weigh-in interview, but they took a few seconds before doing so.

– It’s a great opportunity for me. Pressure is a privilege and I will give everything I can to keep this belt tomorrow – promised Peña to his countrymen.

By the time of the main co-event stare, Kai Kara-France had already taken the stage shirtless, excited for the stare. Brandon Moreno did the same: he tossed his shirt into the audience and climbed up shirtless. The New Zealander walked towards Moreno, who didn’t back down, raised his right arm and stared at his opponent’s forehead. The two will have a rematch for the interim flyweight belt this Saturday.

Intense stares on the main card

Rafael Alves and Drew Dober had the best face of the preliminary card. Dober raised his left fist at the height of the Brazilian’s chin, who walked towards him with his cap back. Alves had a few words for the American, who laughed and greeted him. Another hot look was the first fight on the main card: Magomed Ankalaev and Anthony Smith looked at each other very closely, with intense eyes, without giving an inch to their opponent.

Alexandre Pantoja and Alex Perez also made a tense and close encounter. They greeted each other soon after, but without smiling or looking each other in the eye. Heavyweight Derrick Lewis, meanwhile, had to be held back by Dana White, as he went for Sergei Pavlovich. The Russian did not back down and the two exchanged strength arm to arm, before being separated for good.

This Saturday, the Combat broadcasts “UFC 277” live and exclusively from 19:00 (Brasilia time). O combat.com transmits the “Combat Warming” and the first two fights of the preliminary card from 18:30, as well as the SportTV 3 it’s the Combat YouTube. The website follows the event in real time.

Check out all the athlete weights:

* The four athletes were not entitled to a tolerance of one pound (0.454 kg) in their weights, as the fights are valid for the belt. All other fighters on the card had the benefit.

** They didn’t make weight and were fined 20% of their purse, with the amounts being reverted to their opponents.