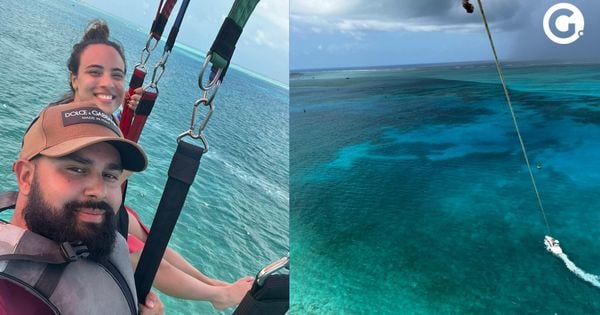 A couple from Espirito Santo got a fright during a tour of the San Andrés archipelago, in Colombia, last Thursday (28). The two were on a parachute, towed by a speedboat, when a storm approached and the rope broke, causing the two to fall into the sea. Everything was recorded by one of the victims of the bad weather, the businessman José Lucas Moulaes Figueiredo, 29 years old (look above).

José was with his wife, doctor Amanda Cavalcante Lozer, 25 years old. “In the beginning everything was really calm. I even asked the guide to go high, because we weren’t afraid of getting wet. But when it was very high, before the storm came, I noticed that the rope was a little thin and I was very tense and firm, I started to get worried, but I was still calm”, said the businessman.

In the images, you can see the dark clouds approaching. “I believe my wife noticed it first, I hadn’t realized that things were getting ugly. There was a moment when the wind was so strong with us up there that we were almost capsizing the boat”, he reported.

The businessman said that the more the weather closed, the more the couple swung in the air. “When we looked down, the boat was on its side and everyone was running from one side to the other so the boat wouldn’t capsize, then despair began, true passengers of agony. We were scared, my wife screaming.”

The guide, who accompanied the tour with the pilot, even dropped an anchor to hold the boat. “It looks like the anchor wasn’t holding up either. Our fear was that it would release. While it was rocking, at least we were glued to the boat. We don’t know if the rope broke or if they released us on purpose so we wouldn’t capsize the boat .”

After the rope broke, they were left on their own. “There is a mechanism where you pull and the parachute descends. This movement is not so simple, but at the beginning of the tour, as a precaution, I rehearsed the movement a few times. In our case, we were being thrown towards the city where we had a stone containment”, he recalled.

“Thank God we stopped a few meters earlier. A few more seconds and we would crash into the palm trees, or the wall of a house or the rocks, then we could really do some damage”

After falling into the water, they managed to recover from the fright. “We went through moments of terror, which were really life-threatening. They said that this had only happened once before ours, in the entire history of the tour. At the hotel, they said that our video is circulating all over the island and world commenting. It’s such a rare thing to happen that people don’t care, but thank God we’re alive and well”, he concluded.

Did you see any errors?


Talk to the Editor

Did you notice any incorrect information in the content of A Gazeta? Help us fix it ASAP! Click on the button to the side and send your message.

Send your suggestion, comment or criticism directly to the editors of A Gazeta.

Previous Former Fla and Corinthians, Felipe takes two penalties and is a hero in Paraná’s classification in Serie D | paraná club
Next Ryan Gosling | Discover the BEST and WORST movies from the star of Netflix’s ‘Hidden Agent’