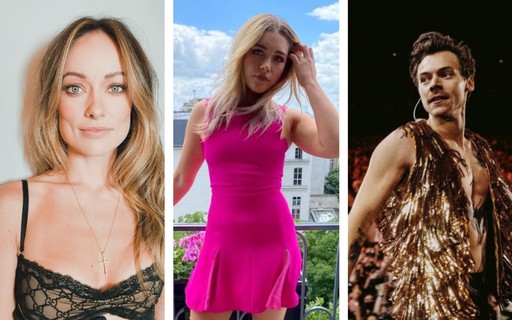 Castmate Annoyed With Harry Styles And Olivia Wilde Making Out On Set While She Was Still Married, Website Reveals – Monet

Florence Pugh did not like at all to see an alleged makeout between Olivia Wilde and Harry Styles on the set of ‘Don’t Worry Honey’ (2022). That’s because, according to the source of Page Six, the current girlfriend of the musician and director of the feature was still married to actor Jason Sudeikis.

The film is scheduled for release in September and, in addition to the trio mentioned above, it also features the performances of Chris Pine and Gemma Chan.

“I can tell that Flo seeing Olivia and Harry on set didn’t go down well as Olivia was still with Jason. [Suideikis] when she hooked up with Harry,” a source told Page Six.

The person says that Olivia’s ex-husband even went to the recording location with the couple’s young children. “Jason and the kids visited Olivia on set a couple of times, so I think all of that made people feel a little uncomfortable,” she added.

Olivia Wilde, 38, and Jason Sudeikis, 46, split in November 2020 and share two young children. The actress went public with her relationship with the British musician, 10 years her junior, in January 2021, shortly after her engagement with the actor ended. She and Jason have been together since 2011 and engaged since 2013.

At the time of their split, however, sources told Page Six that Olivia Wilde had an affair for about a month with Harry Styles before deciding to break up with Jason. The actress and musician met on the set of ‘Don’t Worry Honey’.

To further support the theory that Florence Pugh did not like what she would have seen on set, virtual detectives realized that the 26-year-old actress did not like or interact with the director’s most recent posts talking about her new project.

Well, on social media, the fuss among fans is already rolling loose….

“The way Florence Pugh still hasn’t posted anything about ‘don’t worry honey’ even though there are two trailers for it and yet she’s already posted about all the other projects she’s doing right now, like what has Olivia Wilde done?? ??”

“I don’t know what happened between florence pugh and olivia wilde, but I’m on florence’s side”

At the end of September, entergalactic arrived on Netflix and sprang from the mind of …