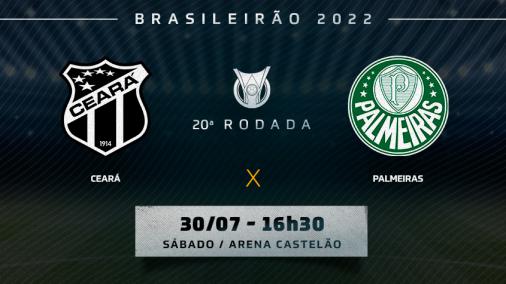 Ceará vs Palmeiras: probable teams, embezzlement and where to watch the duel for the Brasileirão

In this Saturday, Ceará and Palmeiras face each other for the 20th round of the Brazilian championship. The ball rolls at 16:30, at Arena Castelão. Vozão enters the field looking to get away from the Z-4, while Verdão tries to isolate itself even more in the lead.

> Check out the clubs that sold the most shirts in the world
> Ranking lists the best South American teams at the moment; Look

With the support of the crowd, Ceará wants to forget the defeat to Juventude by 1-0 in the last round. 12th in the table, coach Marquinhos Santos’ team has 24 points, just four ahead of the first club in the relegation zone.

For the duel, the commander will not be able to count on Richard, suspended after receiving the third yellow card. In addition to the midfielder, Erick is also out. The striker continues to recover from the injury in the collarbone region, where he had to undergo surgery.

Palmeiras, in turn, arrives packed for the confrontation after three consecutive victories. In the last round, Abel Ferreira’s team beat Internacional 2-1 and reached 39 points, opening a good lead in the lead.

In addition to remaining at the top of the standings, Verdão ended the first round with the best attack, with 31 goals scored, and the best defense, leaked only 13 times.

Rested after a week without games, the São Paulo team will have some important returns. The Portuguese coach will be able to link left-back Piquerez and striker Rafael Navarro, who have recovered from muscle pain.

On the other hand, shirt 10 Rony remains away from the pitch, as well as Jailson, who should not play for the club again this year.

The general retrospect of the duel between Palmeiras and Ceará shows favoritism for the São Paulo team. In 32 games, there were 18 alviverde victories, ten draws and only four triumphs for Vozão.

However, it is worth remembering that the alvinegro from Ceará was one of the only three teams to defeat Verdão in the year. On the occasion, a 3-2 victory in the debut of the teams in the Brazilian.