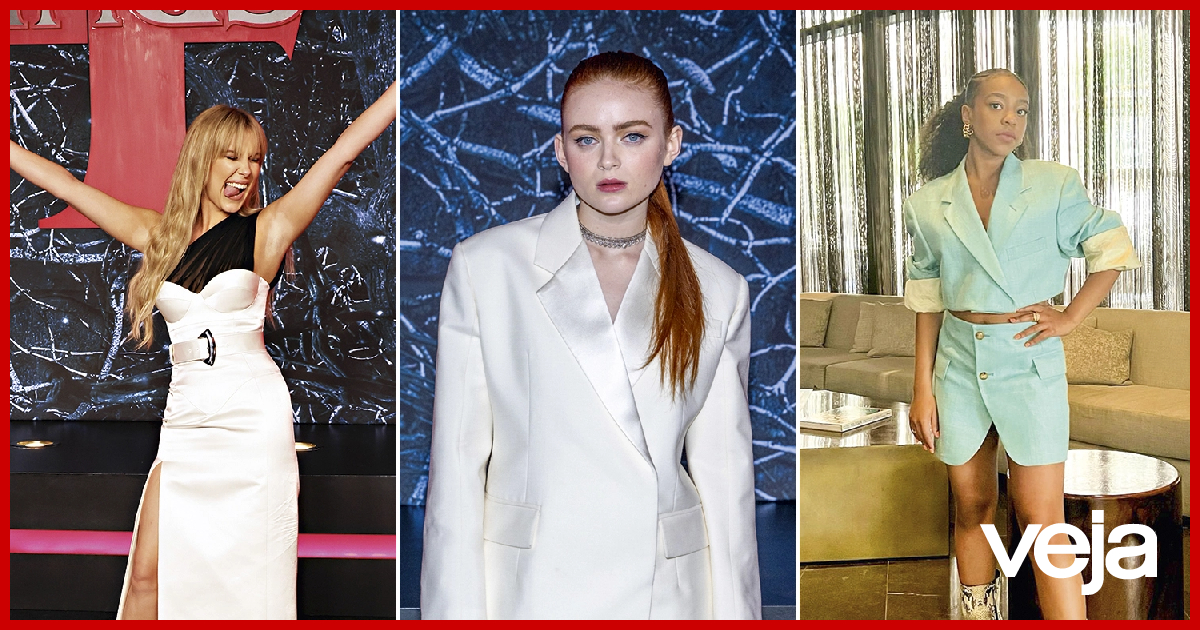 Why ‘Stranger Things’ Stars Want to Look Like Mature Women

During the premiere event of the fourth season of Stranger Things, in May of this year, Millie Bobby Brown, interpreter of Eleven in the series that is the biggest phenomenon of the current Netflix, appeared in a sober white and black dress. The haircut with bangs accentuated the air of a grown woman. Although she is only 18 years old, the actress resembled the character of Sandra Bullock in the film. A possible dream (2009) — detail: at the time, the veteran was 44 years old. In a behind-the-scenes video of the series released recently, yet another look of Millie — now, a black outfit accompanied by flowing dark locks — yielded comparisons among national fans with another older actress: Claudia Raia, 55.

The cultivation of a mature image extends to more actresses in the series’ cast, such as Sadie Sink, who plays the character Max, and Priah Ferguson, the Erica of the plot. At 20, Sadie has favored suits that hide her curves and give her a serious aura. Priah, just 15, sometimes invests in colorful teenage clothing, but prefers the wardrobe of an older woman. the little stars of Stranger Things thus summarize a behavioral novelty. In the transition from childhood to the dreamed of adult career, it is no longer enough for actresses to sell themselves as women: they need to convey a certain image of seriousness and security.

Since the dawn of film and TV, the pressure on child stars—especially female ones—has been overwhelming. It is already proven that growing up in front of the cameras harms the mental health of girls, who have to develop under the scrutiny of millions of people. No wonder, many child actresses released by Disney suffered from the demand to become adults as soon as possible. Miley Cyrus, former performer of Hannah Montana, abandoned the figure of a child and consolidated herself as a pop diva, taking the usual path — the abuse of sensuality. This paid off, but took a psychological toll, including even drug problems. The desperate quest for adulthood has led young actresses like Emma Watson, the eternal Hermione of Harry Potterand Mara Wilson, the Matilda from 1996.

In the generation of girls Stranger Things the pressure took on different nuances. By dressing as adults, they seek to escape hypersexualization in order to be taken seriously and, above all, to meet the expectations of a new form of female empowerment. Growing up in the #MeToo era, Millie, Sadie and Priah demonstrate an attitude that should reverberate for decades to come, as they embrace the idea that you don’t have to be sexy to be seen as mature.

The way the new child stars deal with the age transition seems more balanced compared to the past. But the fact is that they are still subject to a negative effect on the process: the need to “skip” an essential part of anyone’s construction, adolescence. The psychologist and psychotherapist Débora Laks, a specialist in this age group, explains that “adultification” is the attempt to accelerate development, preventing a young person from having important experiences. “This phenomenon is usually driven by inappropriate stimuli”, she ponders. And she warns: “Precocious puberty today is stimulated even more by social networks, which deserves reflection from society”. The talented girls shine on screen — but they pay the price of having their childhood interrupted.

* Editora Abril has a partnership with Amazon, in which it receives a percentage of sales made through its websites. This does not change, in any way, the assessment carried out by VEJA on the products or services in question, which prices and stock refer to the moment of publication of this content.

Previous The changes that will make working in Spain easier for foreigners
Next With goals in the 2nd half, Bahia wins 3-0 and ends a bad phase at home