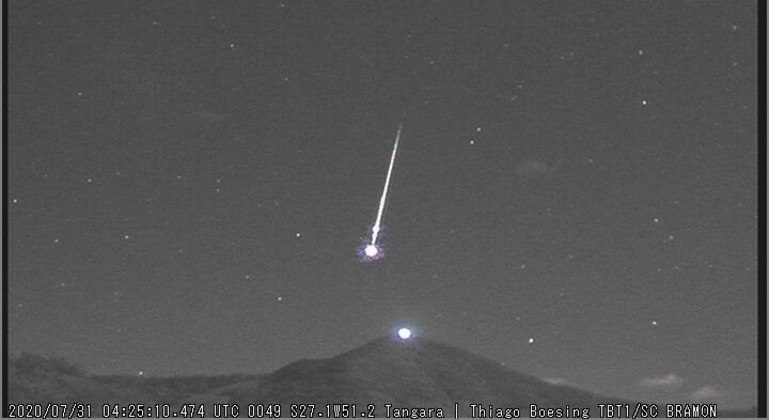 The Alpha Capricornid meteor shower will peak at dawn from Saturday (30) to Sunday (31). The phenomenon occurs every year, at this same time, from July 3 to August 15.

According to the coordinator of the Astronomy Observatory at Unesp (Universidade Estadual Paulista), Rodolfo Langhi, it is on this occasion that the planet Earth, in its movement around the Sun, is crossing a cluster of particles in space.

“[As partículas] burn up in our atmosphere and give rise to meteors. These particles are parts of comet 169P/NEAT that break away from it every time it passes close to the Sun and undergoes heating”, explains the astronomer.

Langhi also says that the phenomenon has this name because meteor showers are related to names of constellations or to a specific point in a constellation. In this case, the name of this shower has to do with the brightest star in the constellation Capricorn.

In the case of these meteors that will be seen in the sky this weekend, Langhi completes by saying that their bright traces appear to those on Earth as trails that start from a point in the sky that is close to this star.

The specialist also recalls that for a better visualization of the phenomenon, it is recommended to observe the meteors after midnight and the probability of having a greater amount of shooting stars in the sky is at dawn.

To observe the meteor shower you don’t need any specific equipment, but the astronomer recommends lying on the ground, in a place far from city lights, with a cloudless sky.