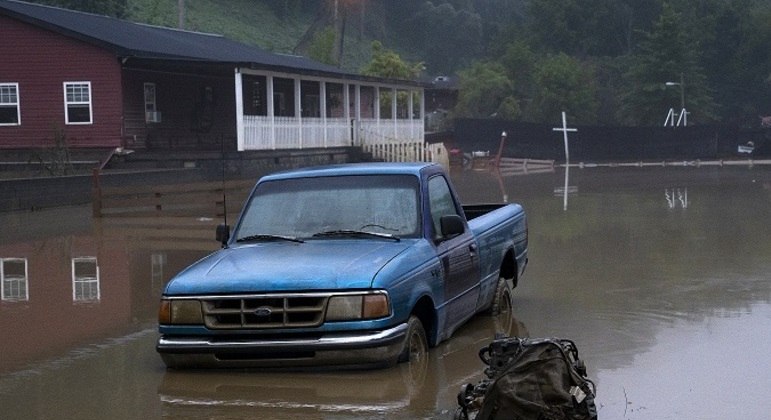 Kentucky: 26 dead in floods and governor talks of ‘more bodies’ to be found – News

The devastating floods in Kentucky, in the southern United States, left at least 26 dead, said Andy Beshear, governor of the state, according to NBC News. According to the American website, this Sunday (31) Beshear posted a video on YouTube confirming the new death toll from the floods and said that there are more bodies, but that he “cannot confirm” how many yet.

On Saturday (30), Beshear told a press conference that he was “concerned that we will find more bodies in the coming weeks”. The governor said that “they are still in the search and rescue phase”. Earlier, he had told CNN that “there are still many people missing in this area and it will be a difficult task to have a fixed number” of victims.

According to Beshear, hundreds of people have been rescued by boat since the floods began on Wednesday night.

“To everyone in eastern Kentucky, we are with you today and in the weeks, months and years ahead. We will get through this together,” he promised.

Beshear said National Guard teams from Kentucky, Tennessee and West Virginia have carried out more than 650 air rescues since the storm began, while police and teams from other state agencies have made about 750 water rescues.

The search, he noted, was “extremely stressful and difficult” for rescuers. Some areas of the state recorded more than 200 millimeters of rain in a 24-hour period.

For example, the water level at the north fork of the Kentucky River in the city of Whitesburg broke its record in just a few hours, reaching 7 meters.

The floods turned many roads into rivers, and some houses in low-lying areas were almost completely submerged, with only their roofs visible.

The weather improved on Saturday, but more rain is expected this Sunday.

“With a cold front moving south, the area will remain largely dry until today. Dry weather is expected to end by Sunday afternoon when the barrier rises northward back into the region,” tweeted the National Weather Service office. Weather in Jackson, Kentucky.

Beshear explained to CNN that the impending rains pose a challenge, because while they are not expected to be “historic” in their records, they will constitute a “difficult” scenario.

The floods in eastern Kentucky are the latest in a series of extreme events that scientists say are a clear sign of climate change.

“We learned a lot of lessons in western Kentucky from those devastating tornadoes about seven months ago, so we’re providing all the support we can and we’re moving quickly across the state to help,” he said.