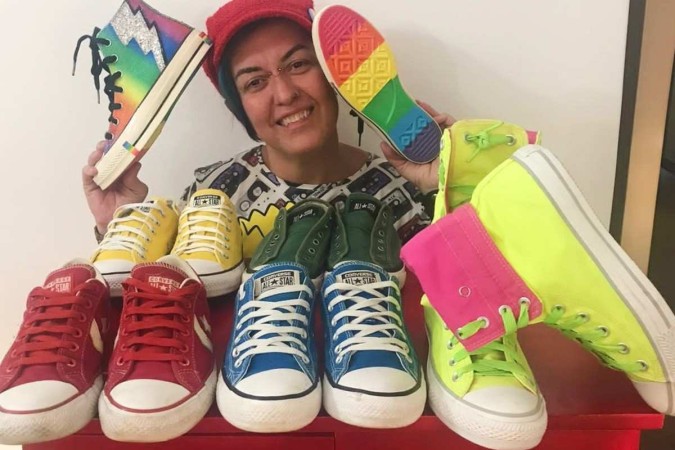 That fashion and society have an intrinsic relationship is not new, after all, what we wear can say much more about our personality than we imagine; shows how we want to be seen. Hence, the erroneous perspective in relating this universe to futility. Note, for example, how often dressing was a motive or instrument for social demands—and changes. It’s no different with shoes.

A fundamental element in the history of clothing, shoes have a practical, protective, comfortable and stable content for different occasions and historical events. Ever wondered, for example, about the context in which the platform or sneaker that covers your feet was invented? The why is not always just aesthetic; in fact, it rarely is.

In addition, reflecting on models that have become a trend again also says a lot about the present and gives indications for the future. Caroline Lardoza, fashion historian, social media retail specialist and content producer, and Gabriela Lira, 20th century fashion designer and researcher, selected the shoes that left their mark on history.

Closed, with a rounded front and secured by a strap with a buckle that goes from one end to the other, the Mary Jane model appeared at the beginning of the last century and was intended for children. With the arrival of the 20s, it began to be used by adult women known as flappers.

Great ideal of beauty of this decade, young women built their image associated with a sense of youth. To look younger than they actually were, they used various resources, such as keeping their hair very short, with a cut similar to that of small boys, and wearing Mary Jane shoes, which brought a sweet and youthful aesthetic.

The stiletto heel, also known as a stiletto — a reference to the fine dagger from Renaissance Italy — appeared in the early 1950s in haute couture houses such as Dior, responsible for its popularity. And despite looking like a simple model, it required a very complete planning, after all, how to balance all the body weight in very narrow bars? With post-war technology, the idea finally got off the ground.

Even in the 1950s, the two-tone shoes by Coco Chanel also fell in the taste of women. Known as a slingback, the shoe met the expectation of creating a timeless model, which combined with various pieces and colors and which would hide dirt, hence the black toe. Today, there are numerous variations in the most popular stores, with affordable prices, but always associated with the elegant and classic style.

From film and music

The audiovisual, as a propagator of fads, presents costumes that help to launch memorable trends. Dorothy’s iconic red shoe in The Wizard of Oz, 1939, was copied by numerous stores of the time and disseminated in American culture in the 1940s. “Some examples are produced and sought after even today”, says Caroline.

The platforms, despite being remembered for the 1970s, have existed since the 1930s and had as their main promoter the singer and actress Carmen Miranda. In her biography, published by Ruy Castro, mention is made of the fact that the artist personally went to a shoemaker to ask him to make a shoe that was much taller than normal. The motivation? Carmen was very short and wanted to appear taller. Thus, the model became his trademark, used in shows, movies and in his daily life.

And what about the boots, which have gained prominence again in 2022? Julia Roberts, in the box office success Pretty Woman, of 1990, appears with the model of very high pipe and stiletto heels to play the prostitute Vivian. The popularity was such that the newspapers of the time called the character “Cinderella in vinyl boots”.

Sneakers are among the most popular shoe styles of the last few decades, but the models as we know them today are fruits of the early 20th century and took years for them to be adopted by various groups. Initially designed for sports, their use in other social events was ignored. “This perception changed a little during the 1930s, which valued casual fashion, but the tennis boom would only come in the 1980s”, points out Gabriela.

The classic All Stars, for example, were created in 1917 as an attempt by Converse to standardize shoes for basketball and only gained popularity when player Chuck Taylor adopted them as his favorite shoe. He even requested changes to make the model more comfortable. Similarly, the Jordan Nike line was created exclusively for former NBA athlete Michael Jordan and, in the mid-1980s, was a bestseller to the general public.

During this period, both men and women wore sneakers. In fact, having a branded one, like Nike or Reebok, was a true status quo symbol. A curious fact is that young fans of the YUP (Young Urban Professional) style — who invested in their personal image to strengthen their careers — used to wear sneakers with skirts and dresses, something considered quite progressive, since until then women in corporate environments had to wear formal shoes to be accepted.

Old love for the All Star

For Luciene Carvalho, 45, there is no comparison: the Converse All Star sneakers are, by far, her favorite shoe. The model is part of almost 90% of its private collection, which has endangered lines, limited edition editions and those with a vintage pattern, which are over 20 years old. The passion for footwear was so significant that it became an occupation.

Five years ago, he created the thrift store Saiu do Armário, to which he is fully dedicated. The name is a pun that indicates, in the literal sense, the pieces that came out of the closet and, in the figurative sense, their sexual orientation. The admiration for the shoe is also part of its history, which, according to Luciene, carries a good nostalgia for youth in the 80s and the punk rock era in the 90s, being still today a timeless icon that is part of many people’s lives.

“It’s a stylish sneaker that goes with everything: skirt, dress, pants, overalls, tailoring, shorts…everything! It is a classic that always reinvents itself in various alternative social groups”, he adds. In addition, for her, another highlight is its high durability, due to the vulcanized sole being connected directly to the sneaker’s upper, and not glued, like most shoes. Also for this reason, “for being an iconic piece of resistance and authenticity”, it has become loved by several groups.

Recently, the collector panned the rare Converse All Star Chuck Taylor 70 Pride Shimmering Black Rainbow, in São Paulo, sneakers she will wear to her wedding. “According to information from the person who sold it to me, he is the only one in Brazil. It has a similar one from Miley Cyrus, but it costs a horror in dollars”, she celebrates.

What remained or returned to trend?

According to stylist Gabriela Lira, tennis and stiletto heels are still going strong. The former, in particular, is present in practically everyone’s wardrobe: rich and poor, children and adults, women and men, etc. “It is perhaps the most basic footwear we have. But despite being basic, there are hundreds of sneaker brands with more fashionista products, whether because of the color, print or shape of the sneakers”, she explains. The doll shoe (Mary Jane) has excellent acceptance among adepts of alternative Japanese fashion.

*Intern under the supervision of Ailim Cabral

Previous How to remove a vehicle from Uber
Next Athletico-PR vs São Paulo: where to watch, schedule, lineups