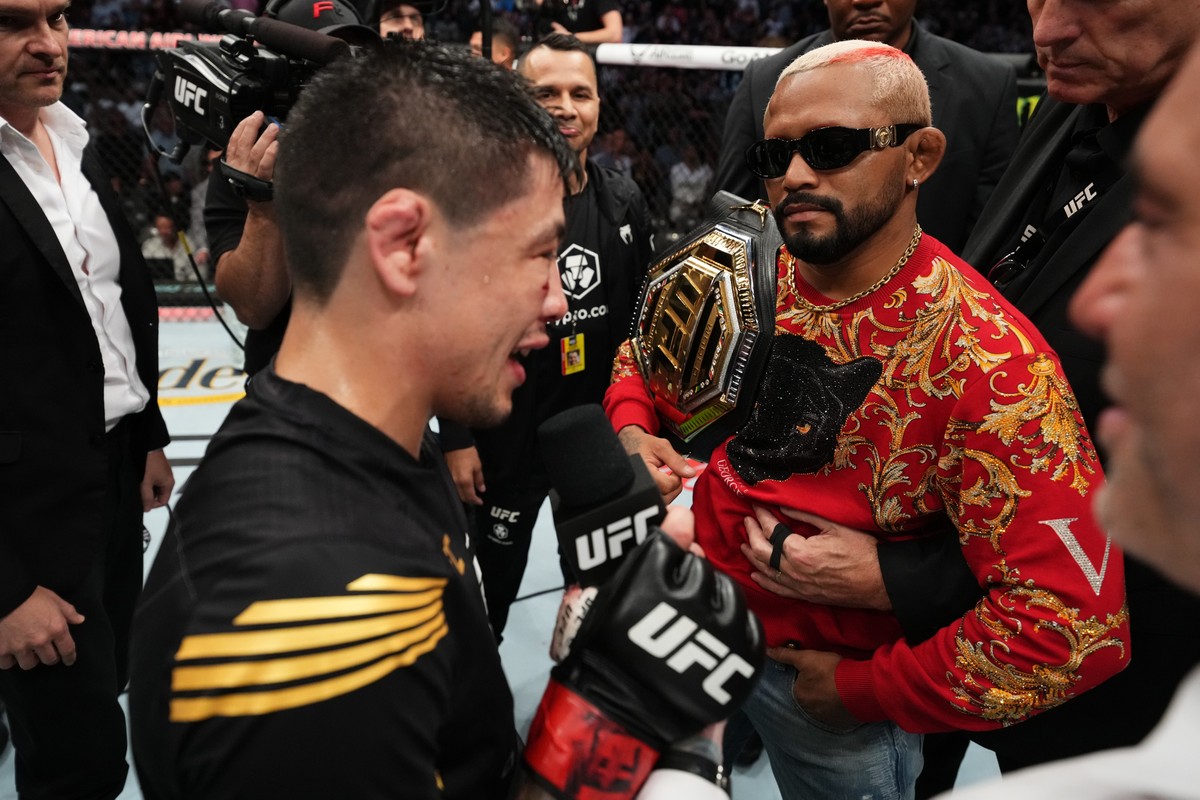 UFC 277: Moreno knocks out and accepts tetralogy with Deiveson in Brazil | combat

The Brazil vs Mexico tetralogy in the UFC with Deiveson Figueiredo and Brandon Moreno is yet to come. The Mexican made the crowd go wild in Dallas this Saturday, in the co-main event of UFC 277, by brutally knocking out New Zealander Kai Kara-France at 4:33 of the third round, and thus becoming the interim flyweight champion ( up to 56.2 kg). The audience booed as Deiveson was filmed in the front row of the arena.

Brandon Moreno had already been linear champion in the second fight of the trilogy he did with Deiveson, in June 2021, but lost the belt in the following fight with the Brazilian. Now it’s up to the UFC to schedule the unification fight. Deiveson, who is recovering from a hand injury, took the stage to face off and asked for a fourth fight in Brazil.

– We’re going to put on a great show for you. It’s his night, he deserves it, a great warrior. You’ll learn to respect that boo, because here there are two fighters ready to put on a show for you at any time (…). I want to take this fight to Brazil, are we going to fight at my house? – said Deiveson, who heard from Moreno: “I don’t care”.

– Coming here for this week was really crazy, because I wanted to face Deiveson Figueiredo with all my fury. But my wife is watching me and I don’t want to talk shit to him. Deiveson, I don’t hate you, forgive me if I hurt you, I forgive you too. But don’t get me wrong, I want to face him,” Moreno said in front of Deiveson.

The first round was one of few emotions. Kara-France took the first action with a low kick as Moreno circled the outside. The fight was even stopped by a knee in the genital region fired by the New Zealander. On the way back, the fight was still studied. Moreno managed to shorten and threw a jab at Kara-France’s front. Then the Mexican dodged, grabbed Kara-France’s right leg and then went to the back. Kara-France exploded and left. In the stands, the crowd chanted “sí, se puede”.

In the second round, Moreno first feinted a high kick from Kara-France and pinned his rival to the grid. Moreno tried to weigh it down and put it down, but Kara escaped. Moreno made another good dodge, belted and unbalanced his rival, who soon got up. Moreno nearly landed a dangerous high kick as Kara-France got to her feet. Moreno went up with crusaders. Kara-France lost balance on the kick and looked nervous. The New Zealander played a good overhand. Moreno kicked high and Kara-France dodged and the Mexican went down. He tried to capitalize, but the Mexican worked his dodge well. Moreno played more when the two shortened.

In the next round, Brandon Moreno kicked and Kara-France scored and put the Mexican down, trying to get into guard. Moreno made an aggressive guard from below. When the New Zealander got up, the Mexican took heavy blows as he climbed. Brandon Moreno already had a deep tan under his right eye by now. Kara-France threw a good combination on top and touched Moreno’s face. The New Zealander fired good shots, but Moreno responded in kind. The Mexican then went on the hunt for his rival’s best moment in the third round, and soon hit a kick to the beltline that made Kara-France double over and fall. Moreno took advantage and swung wildly until referee Herb Dean stopped him.

– I love that kick. It’s funny how things fell into place. I’ve been training this kick all my training camp and I’m becoming a more complete mixed martial artist,” Brandon Moreno said of the decisive moment of victory.

Couldn’t even sweat. With a devastating performance, Russian heavyweight Sergei Pavlovich detonated American Derrick Lewis with a devastating knockout at 55 seconds into the first round. The victory was hotly contested by Lewis, who did not accept referee Dan Miragliotta’s interruption. This was the Russian’s fourth consecutive victory, all of them by knockout.

The fight started with Pavlovich closing the gap and cornering Lewis on the fence. The American threatened to react, but the Russian increased the pace and connected a hard blow to the rival’s head, which he felt and began to retreat. Pavlovich kept up the attack and took down Lewis. Referee Dan Miragliotta decided to interrupt the dispute, under protests from the American, who protested a lot while still inside the Octagon.

UFC has Sledgehammer and TUF final live and only in Combat! — Photo: Combat Art

Previous Fans Celebrate George Clooney and Julia Roberts’ New Film Together: ‘The World Returns to Its Axis’ – Entertainment
Next Plane B777 enters collision course with A320; and are saved at the last second by TCAS