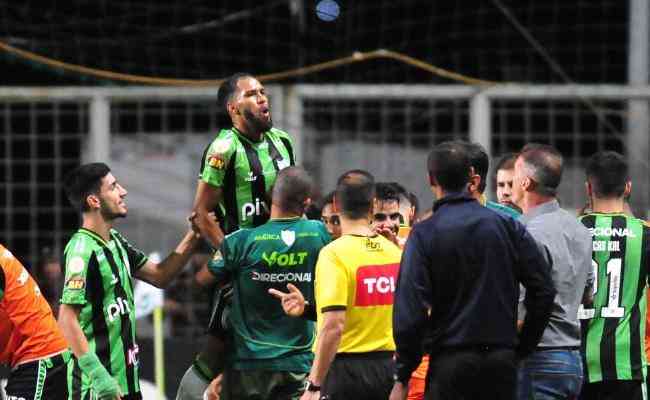 America comes out behind, but turns on Ava and wins second in a row in Serie A

In a very busy game, America came out behind, but got the comeback and beat Ava 3-1 at Independência. This was the second consecutive victory of the team in Serie A of the Brazilian Championship.

The goals of the American victory were scored by Henrique Almeida and Everaldo (twice). Bissoli did that of Santa Catarina.

With the result, America reached 24 points and moved away from the relegation zone. The alviverde team returns to the field next Saturday (08/06), at 16:30, against Juventude, at the Alfredo Jaconi Stadium, in Caxias do Sul, for the 21st round.

Ava, who remains with 21 points, will face Corinthians, also on Saturday, at 7pm, at the Ressacada Stadium, in Florianpolis, for Serie A.

Tie and a lot of movement in the first stage

Right at the beginning of the match, America lost possession in midfield and took the first goal. At 3″, Nathanael received on the left, made an excellent cross and sent it to Bissoli in the small area. With a header, the forward opened the scoring for Ava.

In those first ten minutes, the Rabbit suffered a lot of pressure. The Minas Gerais team could not advance to the attack and saw Santa Catarina tighten the game in their defense field.

Subsequently, America gained strength, mainly with corners and crosses. At 34′, Matheusinho played the ball in Ava’s area, several players let it pass, and Henrique Almeida dominated and finished with efficiency, to tie the duel.

Three minutes later, the Santa Catarina team pressured the alviverde team again. In a shot from outside the area, Kevin forced Cavichioli to defend in the corner and send the ball to a corner.

Despite the alternation of dominance between the teams, America finished the first half better in the match. Even in a bit of a hurry, Coelho did not give up his foot after the first goal and sought a comeback until the end of the initial stage.

Everaldo show and American turn in the second half

America started the second half aggressively in the attack. On the first move, Danilo Avelar raised the ball to Henrique Almeida, who missed the shot inside the area.

The team led by Vagner Mancini had a good chance again in the 17th minute, when Lucas Kal received a pass and kicked inside the small area, but stopped in a good defense by Vladimir.

Two minutes later, Bissoli went up and swung the nets to Ava’s head, but the linesman quickly signaled the centre-forward’s offside. The VAR arrived and confirmed the decision of the field judge.

America made several changes in the second third of the final stage of the match. In addition to Bentez’s debut, Wellington Paulista also came from the bench. Shirt 9 was injured and hadn’t played since the beginning of July.

After the changes, Coelho got the turn in a move very similar to the first goal. Pedrinho received on the left, crossed to the area, the markers let the ball pass and Everaldo received the leftover. The forward kicked firmly to put America in the lead.

Everaldo also scored the third Minas Gerais goal. And it was a goal. The winger received from Bentez on the right, cut the marker and kicked with his left leg to confirm the home team’s victory, at the very end of the game.

yellow card: Everaldo, at 45′ of the 2nd quarter

Reason: 20th round of Serie A of the Brazilian Championship

Previous In heavy rain, plane loses control during landing and goes off the runway – Prisma
Next Chinese Rocket Disintegrates Over Indian Ocean, US Demands Information | world and science