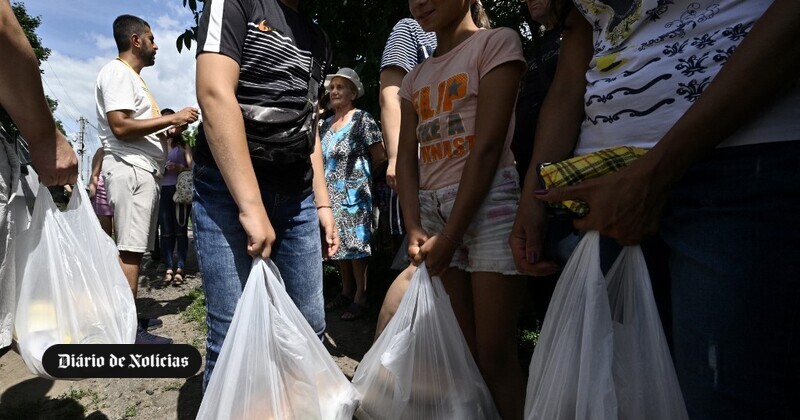 On a hot morning, dozens of people line up in Kharkiv, Ukraine’s second-largest city, and defy Russian artillery attacks to ask for food aid.

“People don’t think about danger because they need to eat,” said Maxim Gridasov, a 45-year-old volunteer, as he distributes food packages in the Nemyshlyansky neighborhood. “Even when there are bombings nearby, nobody leaves,” he adds.

And this is despite warnings published by the military in the local press about aid distribution points, which always include the phrase: “Please don’t line up, it can be dangerous.”

According to the Office of the United Nations High Commissioner for Human Rights (OHCHR), more than 5000 civilians have died in Ukraine since the start of the Russian offensive on 24 February.

Shortly after the AFP visit, Nemyshlyansky was bombarded with Soviet S-300 missiles, according to local officials.

At least one queue to receive food aid was reached. In March, 14 people died in a line to receive bread in the city of Chernihiv (north).

Russia says it only attacks military targets and accuses Kiev of being behind the incidents or organizing them: at times it claims that Ukraine uses civilians as “human shields”.

Despite the danger, nearly 40 people were waiting for food packages from the charity ‘Hub Vokzal’ in Merefa, near Kharkiv.

Vitaliy Znaichenko, a 38-year-old train driver, holds a plastic bag with rice, bread, noodles, onions and cereal as he leaves the distribution point.

“It was difficult at first, when the markets were closed or there was nothing in them because of the war. But now, somehow, we are used to it”account.

This is his first time at the venue in two months and Znaichenko didn’t want to stay too long among a large crowd, at the risk of something happening, but he feels he has no other option.

“I have to live somehow. I have to work in a train station, which is also risky”narrates.

The region, on the border with Russia, is an important agricultural area, but many factories have been destroyed by bombing or have been relocated.

The inhabitants are victims of war in two ways, traumatized by the conflict and powerless in the face of the loss of their families’ only income.

Hub Vokzal distributed 900 tons of food, diapers and building materials to nearly 30,000 families in cities and towns in the Kharkiv region. Its founder, Mykola Blagovestov, explains to AFP that he and his volunteers were several times under fire from projectiles when collecting or distributing food.

“We go and do our job because it’s much better psychologically to work and talk to people than to stay at home scared”he stressed.

The World Food Kitchen, another food aid organization and perhaps the best known of those present in Kharkiv, has also recorded missile attacks against its cargo convoys and agricultural partners.

As Russian troops withdrew from Kiev and the focus shifted to the battle in the east, the organization began delivering more than 10,000 meals a day to the city’s hungry citizens.

One of its associated restaurants in Kharkiv, Yaposhka, was destroyed when it was hit by a missile in April. Four employees were hospitalized with burns.