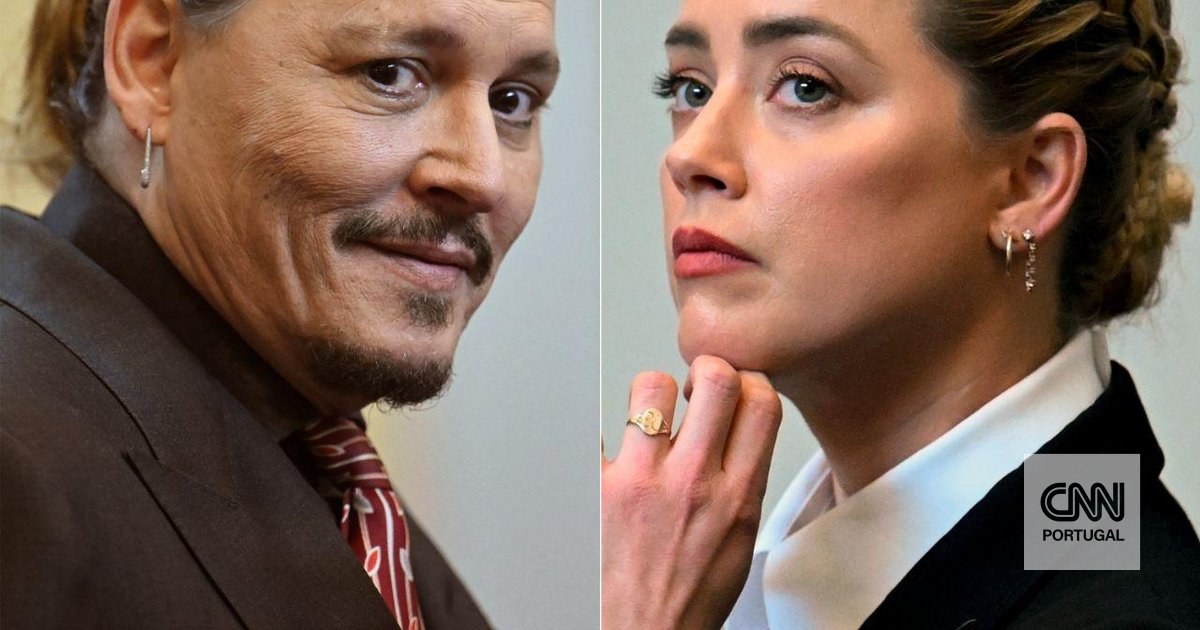 More than 6,000 pages of documents sealed by the Fairfax court were revealed this weekend

The trial that pitted Johnny Depp and Amber Heard ended in June, in a verdict that convicted them both of defamation and involved the payment of 15 million dollars to Depp and two million to Heard. Two months later, the case seems far from closed.

More than 6,000 pages of documents sealed by the Fairfax courthouse were revealed this weekend, with information that the respective defense teams tried to submit as evidence – but were ultimately dismissed by Judge Penney Azcarate before reaching the jury.

The documents, so far unpublished to the public, were analyzed by the US website The Daily Beast and provide additional context to one of the most media-driven trials of recent years.

In one of the most serious accusations directed at her ex-partner, Amber Heard claimed to have been sexually assaulted with a bottle. The trial did not, however, include a detail that the actress’ team considered “absolutely relevant”: an alleged condition of erectile dysfunction, which would make “Depp more likely to get angry or agitated on dates” with his partner. Heard’s lawyers argue that “the relevance” of this information outweighed the possibility of “danger of unfair bias” on the part of the jury, who would be able to “make a rational assessment of her weight”. Johnny Depp’s alleged health condition ended up, however, not reaching trial.

Four tests submitted by Johnny Depp’s team were devalued under a single paragraph, which determines the exclusion of “irrelevant personal questions”. The first concerned photos in which Amber Heard appeared naked, in an apparent attempt to prove that she did not have bruises or marks of physical violence on the dates in question. Mentions of the actress’s previous relationships – as well as her sister Whitney – were similarly dismissed as not relevant to the case. A “brief period” as an exotic dancer is also mentioned, which the actor allegedly used to “frivolously or maliciously suggest or insinuate that [Heard] was once a companion”.

Whitney Henriquez, Amber Heard’s sister, is mentioned again in documents dated February 3 – months before the trial started on April 11. The witness is faced with a series of questions about Logan, a friend of the actress who died in a car accident when they were both teenagers. Depp’s prosecution team begins by questioning the nature of this relationship, later insinuating that the “Aquaman” star was in the car at the time of the accident. Finally, they ask if the suspension of the driver’s license in the teenage years was related “to the accident in which Logan died”.

In the documents now published, it is read that the suspension was due to “fines for speeding” and that the suggestion of intervention in the accident “is made despite there being no evidence whatsoever to support this outrageous allegation”.

Multiple text messages previously featured in the court battle against “The Sun” tabloid are said to have disappeared for “unknown reasons”. These include a 2014 conversation between Heard and Stephen Deuters, Depp’s then assistant, during an alleged episode of violence aboard a private plane.

“If someone were honest with him about how bad he really was, he would be shocked,” Deuters begins, adding that substance abuse shaped the actor’s judgment. “I’m sorry he doesn’t have a better way of understanding the gravity of his actions yesterday. Unfortunately for me I remember them in every detail. He was horrified when I told him he kicked you.”

Later, still in the context of this incident, Depp himself wrote several messages addressed to his companion: “Once again, I find myself in a situation of shame and regret. Of course I’m sorry… I won’t do it again… My illness took over and gripped me… I feel so sad to let you down.” In subsequent messages he continued to apologize for his behavior and nicknamed himself “lunatic” and “wild”. Not getting a response for the next two hours, he commented, “I can see that understanding and forgiveness are not on the menu.”

Depp’s law firm concludes that the messages may have been “deleted” after an exhaustive – and fruitless – search for them. For this reason, several messages already tried in the UK court were not admitted to the Virginia trial.

The fifth film in the “Pirates of the Caribbean” saga, in which Johnny Depp re-incarnated the iconic character Jack Sparrow, was shot during his marriage to Amber Heard – the actress would therefore be entitled to half of the resulting “tens of millions of dollars” of this paper.

Heard, however, rejected this large sum. Lawyers initially “begged” him to reconsider, but later acknowledged that the client had been “amazingly true to her word, that this wasn’t about money.”

Depp “does not allege physical or mental harm”

Although the first accusation of violence came from Amber Heard, in an article in The Washington Post in which she did not directly name the aggressor, the last trial was the scene of mutual accusations of physical and psychological violence.

One of the documents released this weekend is an appeal imposed by Depp’s defense team, which argues that the actor should not be subjected to independent medical examinations because “he does not allege physical or mental harm”. It is further specified that Depp “does not allege that the actions of [Heard] had inflicted specific psychiatric harm” or “unusually severe emotional distress”, factors that would require assessment by a healthcare professional.

These statements would be contradicted throughout the trial, with successive accusations of physical, psychological and emotional violence attributed to the ex-partner.

Johnny Depp presented several photographs and audio recordings that purported to prove the alleged incidents of physical and emotional violence perpetrated by his ex-wife. Among these is the voice recording in which the actress seems to suggest that no one will believe that Depp, “a man”, would be a victim of domestic violence.

In order to challenge this allegedly incriminating evidence, Heard’s team turned to Julian Ackert – a forensic expert at iDiscovery Solutions – to analyze the metadata of the multimedia elements. Testifying in court under penalty of perjury, the expert claimed to have detected “anomalies that compromise the authenticity” of the evidence, such as “missing” or “manipulated” file creation dates.

“These facts could be a sign of digital manipulation”, concludes Ackert. He further testified that the photos submitted by Heard were original.

As for the audio files, the protagonist of “Pirates of the Caribbean” will have submitted “partial” versions with obvious cuts, “which started and ended in the middle of a stage”.

According to the newly revealed information, Depp’s defense team endeavored to remove “references and related evidence” with the controversial singer, accused of domestic and sexual violence by several women, arguing that the friendship between the two could see the customer unjustly “condemned by association”.

In messages released by Depp himself in previous trials, Manson accuses Lindsay Usich, his current wife, of replicating Amber Heard’s “sociopathic” behavior. “She is being like Amber and the police will show up to impose an injunction on me”, he contextualizes, before asking his friend for “asylum”.

Fake accounts and… connections to Russia?

Johnny Depp emerged victorious from the defamation lawsuit, but not only. Although he has accumulated admirers and box office successes throughout his career, the legion of fans expanded and revived during the trial, especially on social media, where videos and “memes” in support of the actor multiplied. The almost unanimous admiration of the virtual world led Amber Heard’s team to question this trend, alleging evidence of a “Russian ‘bot’ campaign” related to then-lawyer Adam Waldman, who allegedly had “Russian connections”. The judge agreed to rule out any evidence of Waldman’s “alleged wrongdoings” and an alleged campaign against Heard.

The integrity of Adam Waldman is called into question again when the actress’ team alleges that the statements of a witness were obtained “through threats and deceit”. The witness in question is Laura Divenere, a friend of Heard’s who said she didn’t see any bruises or marks of violence. In the information now shared with the public, it is written that Divenere “witnessed that she felt coerced into signing the statement” and that she was “threatened with negative consequences if she did not cooperate” with the lawyer.

But not all appeals proposed by Depp’s lawyers have been successful. Some of the evidence they wanted to exclude ended up going to trial and being considered by the jury – otherwise, without much weight in the final decision, which favored the actor.

One such element is the testimony of Ellen Barkin, an American actress who had a relationship with Johnny Depp in the 1990s and who describes her ex-partner as “controlling” and “jealous”.

The team also tried to devalue two multimedia events, without success. The first consisted of a written conversation between Depp and Paul Bettany, in which both actors try to devise a method for determining whether Amber Heard is a “witch”. Depp proposes, “Let’s drown her before we burn her! I’ll fuck the burned corpse next, to make sure she’s dead.” In a second test in multimedia format, Heard can be heard saying “I broke up with you a week before, a week before, a week before you beat me”.

Although most of the information exposed by these documents disfavors Johnny Depp, Amber Heard’s team also presents statements of dubious authenticity. In a discussion of the multimillion-dollar economic losses suffered by the actress, allegedly as a result of the defamation suffered in the course of the divorce proceedings, lawyers mention a list of Hollywood stars who would be comparable to Heard’s status: Jason Momoa, Gal Gadot and Ana. of Weapons. The Daily Beast notes that this statement is “dubious”, as these actors are “clearly” stars of the highest caliber.

Previous Botafogo explores Portuguese market after arrival of Luís Castro | botafogo
Next Corinthians vs Flamengo: players join the crowd in the stands before the Libertadores decision | liberators