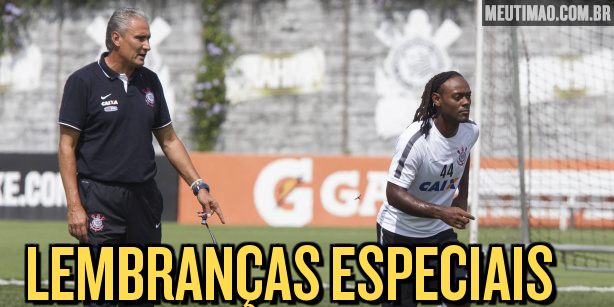 Striker Vagner Love, who had two spells at Corinthians, spoke about his relationship with the Parque São Jorge club and his former teammates. The player, who arrived at Timão for the first time in 2015, stated that he has the team as the favorite in his career.

“The Corinthians. Because it was the team that won titles here in Brazil, I created a very strong identification. It’s not that I haven’t created in other clubs, but it’s Corinthians because I won titles and scored important goals“, said Love in an interview with Specular Sportin the board Played with Who?.

Still in the same interview, which recalls the player’s entire career, Love also brought back the backstage of his time at Timão. Asked about the best coach I’ve ever worked with, the player cites three great coaches, but highlights Tite, who currently commands the Brazilian team.

“I had good coaches. Tite, Dunga, Valeria from CSKA. These three are the best. I would put Tite as the best coach, for everything I went through with him, especially in 2015. He helped me a lot in that period, which was one of the most important in my career“, says Love.

At 38 years of age, Vagner Love has not forgotten great friendships in the Corinthians squad. The player talked about the funniest teammates in his entire career and also pointed out that the most grumpy athlete who has ever shared the lawns also played for Timão.

“I had funny partners. Dudu Cearense was a guy who joked all the time. Jadson I think is one of the worst to joke around. I think they are in the Top 3. There’s a video that rolls to this day of us singing on the bus, Jadson thinks he’s a pagode singer, sertanejo. It was me, Renato, Emerson, on the bus, everyone playing a samba and he tries to imitate Belo“, remembers Vagner Love.

“The most cranky? Even I am a little. I’m a little boring. I charge myself too much, so I like to charge my teammates too. But Petkovic is quite grumpy. Elias… looks like an old man, he complains about everything. Of the ones I’ve worked with, are the most boring“, ended.

For Timão, Vagner Love has 121 games and 29 goals scored. In his first spell, in 2015, the player played 50 matches and helped to win the Brasileirão that season. In the second coming to Timão, there were 71 games and the conquest of Paulistão in 2019.

Last week, after three years out of Brazil, Love was announced as a new addition to Sport. The striker will wear the number 99 shirt at the Recife club. The player even received proposals from other clubs, such as Paysandu.

Previous The 12 worst fake movie accents, from Ana de Armas to Russell Crowe
Next Google Pixel 6a ties with iPhone 13 in DxOMark camera test, but screen is below average