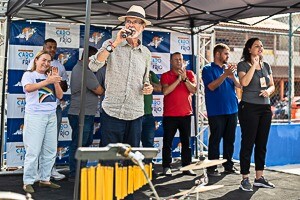 Residents of the Maria Joaquina neighborhood, in Tamoios, Cabo Frio district, were awarded, this Friday (29), with the social currency Itajuru, which is part of the basic income social program of the Municipal Department of Social Assistance. In all, 500 families benefited from the cards during the launch event in the neighborhood’s main square.

The ceremony was attended by Mayor José Bonifácio, the secretary of Social Assistance, Nilza Miquelotti, the coordinator of the Social Currency Program Itajuru, Adriano Brisola, representatives of the municipality and leaders of Cabo Frio and Búzios, such as councilor Raphael Braga, in addition to of the presentation of the group Tambores Urbanos.

“This is the third phase of expansion of the program, we started with Manoel Corrêa, then in the neighborhoods of Monte Alegre, Boca do Mato, Porto do Carro and surrounding areas, and now Maria Joaquina. The Itajuru currency will inject R$100,000 into local commerce. Today, 1,500 families receive this benefit in the municipality, by the end of the year, our expectation is to reach 3,000 families and, by the end of the term, 10,000. And this value will follow inflation. In the month of October, when the program celebrates one year, the value will increase by 10% to R$220. So, residents will receive November with a raise. The Finance secretary is not there, right? She’s going to go crazy when she finds out I’m announcing this”, joked the mayor while speaking.

The secretary of Social Assistance, Nilza Miquelotti, also spoke. “This currency is a sensitivity of the government program for bringing to the most needy communities a benefit that will give dignity to residents. Congratulations for understanding that these people need a sustainable public policy that will bring, over time, a better quality of life”, she said.

The coordinator, Adriano Brisola, spoke about the expansion of the program. “The social program is a success, and we need to reach those who really need it. Today we arrived at Maria Joaquina. We know that in past governments people were sidelined, but thank God the benefit arrived and arrived at a good time, and the community embraced it. I’m sure it will make a difference and help a little bit in feeding the most vulnerable population”, said Brisola.

The cards loaded with the value of 200 itajurus, which corresponds to the amount of R$200, were delivered in alphabetical order and could be used as soon as the residents had access to the envelope. During the ceremony, two beneficiaries received the symbolic cards, representing the quilombola community in the neighborhood, Ana Alice Costa and Ana Lúcia da Conceição.

“For me it was very good to receive this social currency. It helps, it helps a little bit and it will make a difference in my life”, said Ana Alice, adding that she will only use the money to buy food for her family.

According to the City Hall, the choice of locations for the expansion of the program is based on data and reports developed by the program’s coordination team, composed of technicians from the Superintendence of Basic Social Protection, the team responsible for Bolsa Família / Cadastro Único and Reference Centers. in Social Assistance (Cras), all linked to the Secretariat of Social Assistance of Cabo Frio.

Also according to the municipal government, from October 2021, when it was launched, until April 2022, the income transfer program has already moved R$766,334.90, and has 78 registered commercial establishments. Most of the income is used for foodstuffs (80%) and pharmacy (8%).

Maria Joaquina is on the edge of the municipalities of Cabo Frio and Búzios, and was constantly a reason for a political fight between the two cities to see who should embrace the territory. This is because of the distance, many residents enjoy the municipal services of the resort, such as health and education. The last court decision, which took place in October 2020, returned the territory to Cabo Frio, sealing the end of the dispute.

Raphael Braga is present at the launch

The launch of the social currency brought together several political leaders from Cabo Frio and also from Búzios. Representing the resort, the councilor of the resort, Raphael Braga, went to honor the action of the neighboring municipality and congratulated the municipality of Cabo Frio for this look at the Maria Joaquina neighborhood.

“Maria Joaquina was abandoned for many years, it’s been almost two decades and the people need special attention. I believe that with the arrival of the Itajuru currency, this income distribution program, the neighborhood can hope that the municipality of Cabo Frio will have a special look at Maria Joaquina. I’m rooting for it. I strongly believe in the social currency program, income transfer, it was even an indication of mine in Búzios”, recalled the parliamentarian.

Previous Can the recent Bitcoin (BTC) drop be considered positive?
Next São Paulo is interested in Mateus Vital, from Corinthians; Santos also consulted