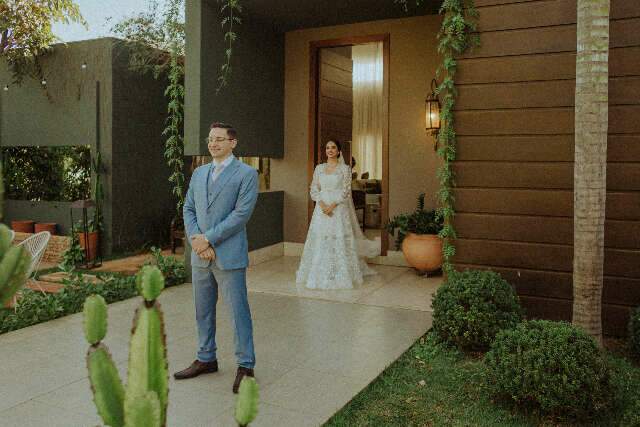 By giving up many things that tradition deems important, Samara and Ricardo made a dream come true.

Anyone who looks at the romantic photos of the wedding of Samara Yasser Yassine Dalloul and Ricardo Edgard da Silva can’t imagine that they made different choices. But those who attended the ceremony were moved by the couple’s decisions, which, in addition to breaking traditions, ensured a happier and more emotional “yes”.

The two have been together for almost 10 years and since the beginning of their relationship they have a good story to tell. The two met at a bar, when Ricardo went on a date, but ended up falling in love with Samara. Months later, the proposal came and then Ricardo surprised her with the proposal of marriage in Ushuaia, on a frozen lake after a trail in the snow.

Just for these episodes Samara was sure they weren’t the conventional type, so they decided to get married their way.

“The first thing we decided was that they went in together. After almost 10 years of walking and partnership, we didn’t want to be handed over to anyone”, describes Samara, 31, who is a federal prosecutor.

Naturally, they also opted for the “first look” – when the groom sees the bride before the wedding. An hour and a half before the ceremony they met in the event’s garden, took pictures and waited hand in hand for the guests to arrive.

In addition to entering together, Samara and Ricardo did not want a bouquet, couples of godparents, pages, bridesmaids and florists. “I researched the wedding symbols in depth, and discarded what did not express our desire”, says the bride.

The bouquet, in which one of the meanings is “to ward off the evil eye”, was transformed into a collective construction. “Everyone who entered the ceremony carried a sprig of flowers, myself included, and deposited this sprig (representing the love and good wishes they would have for us) in a vase on the altar. When I placed the last flower, the vase was retracted and they formed a bouquet for the exit”.

Samara also didn’t throw the bouquet because she doesn’t believe that happiness in the “next to be married”. “We didn’t want our wedding to be a day for the bride, nurturing the idea that success is in being a woman on your wedding day. We just didn’t even bring it up and that was one less day of female rivalry in the world.”

The couple also did not invite godparents, the parents, the brothers and two cousins ​​entered alone, one by one, with their bouquets of flowers. “We don’t believe in traditional union formulas and we wanted to represent that in our ceremony. We invite people for who they are in their individuality. Everyone came in to the same song, an instrumental of a song from a Japanese animation that I really like”.

During the vows, Samara sang to the groom. After the “yes”, the couple left in a procession straight to the dance floor, debuted right away. “It turned out that we didn’t even use the candy table to take posed photos. We took some important photos right after the ceremony to enjoy the light of the sunset) and then we only asked for spontaneous photos, in the middle of the party, on the dance floor, where the hug was happening”.

Everything went as planned, thanks to the team and the ceremonialist Karla Lyara, who understood the profile of the bride and groom and transformed the wedding. “Certainly we drove our ceremonial mad, but everything turned out as we dreamed”.

Check out the image gallery: