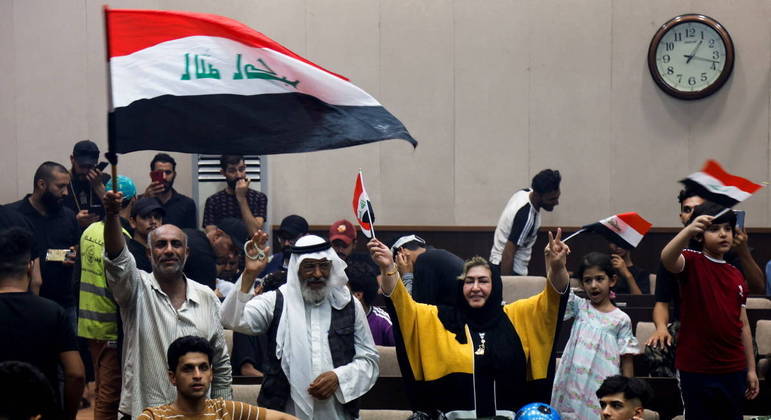 
Hundreds of supporters of influential Shiite political leader Moqtada Sadr occupied the Iraqi parliament on Sunday.for the second consecutive day, in protest against the corruption and inefficiency of the government in a country immersed in a deep institutional crisis.

Despite tear gas, water cannons and high temperatures that reached 47ºC, protesters invaded the hemicycle on Saturday after tearing down concrete barricades at the entrances to the so-called Green Zone, the most protected area in Baghdad, where institutions and embassies are located.

Almost ten months after the October elections, Iraq still does not have a new government.

Sadr, a cleric who once led a militia against Iraqi government forces and the US military, uses the protests to signal that his views must be taken into account in forming the new government, analysts say.

The trigger for the occupation was the decision by the pro-Iranian Shia bloc to appoint former Executive Minister Mohammed Shia al-Sudani to the post of prime minister.

This morning, protesters celebrated the Muslim month of Muharram, a traditional Shia celebration with religious chants and large communal meals.

“We expected the best, but we got the worst. The politicians who are currently in Parliament have not brought us anything,” said one of the protesters, 45-year-old Abdelwahab al-Jaafari.

Some spent the night inside the air-conditioned building, which dates back to the time of dictator Saddam Hussein, with blankets spread out on the marble floor.

Others went out into the gardens, where they lay on plastic mats under the palm trees.

In a multi-ethnic Iraq, forming a government has involved complex negotiations since the 2003 US-led invasion toppled Saddam Hussein.

Sadr’s caucus emerged from the October elections as the most important parliamentary faction, but far from the majority.

In June, its 73 lawmakers resigned in an attempt to push for a new government. Still, no agreement has been reached to appoint a chief of staff.

Despite oil wealth, Iraq continues to be plagued by corruption and unemployment, among many other problems, sparking a youth-led protest movement in 2019.

As a result of previous agreements, the Sadrists also have representatives at the highest levels of government ministries and have been accused by their opponents of being as corrupt as other political forces.

But protesters see Sadr as a leader who fights corruption.

Oum Hussein, a 42-year-old woman, said the challenge sought a government of “people with integrity who serve the country” and accused Sadr’s opponents of choosing political figures “known for corruption”.

Both the United Nations and the European Union have warned of escalating tensions.

In addition, Iraqi Kurdish officials in the north of the country have offered to mediate talks in their capital, Erbil.

Previous Paraná Clube cheerleader dies after being trampled by PM horse
Next Fluminense had a documentary project for Fred: “I vetoed the idea”