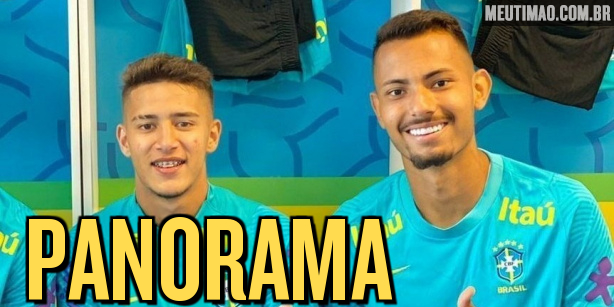 Corinthians remains interested, but already treats with pessimism the possibilities of midfielder Keven and defender Lucas Belezi, from Under-20, to continue at the club. It is worth remembering that the duo has a contract with Timão until the end of the season and is away from official commitments until the talks come to an end.

As determined by My Helm, in the case of the defender, Corinthians made a renewal proposal along the same lines as the one offered to Robert Renan, who is now in the professional team. The contract, as revealed by a member of the alvinegra board, included the payment of gloves and an equal salary to a player in transition to the professional team.

Although Corinthians remains interested, talks for a contractual renewal have slowed down in recent months. And one of the reasons for the brake on negotiations is the growth of a competitor of Belezi in the U-20.

The good performances of Murillo Santiago, also a defender, for Timão’s U-20 this season are generating strong internal excitement at the club, who rates him as a useful short-term player in the pro. The tendency is for a promotion to take place after the 2023 São Paulo Cup, or even before, if Corinthians negotiates any of its professional defenders.

In the case of Keven, the scenario has some similarities. The young player, who has been with the club since 2008, was once in talks with Corinthians for a contract renewal, but has seen his staff back out of the deal in recent weeks.

At 18, Keven’s managers see a sporting appreciation as the main factor for the midfielder’s permanence at the club. At this moment, in the midst of the youngster’s departure from the matches, the midfielder sees Guilherme Biro and Wesley, younger, gain space with the professionals.

The disbelief in a promotion to the professional team took Corinthians by surprise, as the club planned to integrate Keven into the top team. The midfielder’s name, according to the My Helmis constantly on the agenda in the dialogues of Alessandro, manager of professional football, with employees of the club’s youth categories.

Corinthians continues without “throwing in the towel”, but already understands that the permanence of both players becomes increasingly unlikely with the passage of time. Since the beginning of July, the two players are already able to sign a pre-contract with any team and leave Parque São Jorge without any financial return to the club.

See more at: Corinthians Base and Ball Market.

Previous Review: The Dropout (miniseries) – Star+
Next man wants to dig landfill in search of HD with R$ 1.1 billion