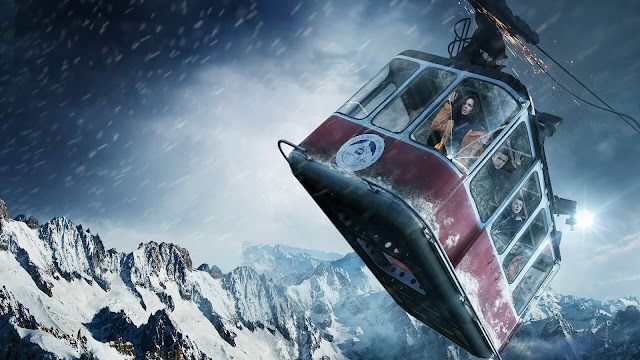 Panic in Heights, in the Megapix Session, Aliens Special and Marathon 007 are the highlights of the week

Panic in Heights is the premiere of the week in the Megapix Session, Friday (05), at 21h. The Russian thriller brings an atmosphere of tension and suspense when a group of friends get into a big cold when they invade a ski resort to enjoy the New Year’s night and have to fight for survival, when they get stuck in the cable car hundreds of meters high.

On Saturday (06), the channel airs a Double Program with the actor and martial arts expert, born in Hong Kong, Jackie Chan, who has starred in more than 150 films, starting at 1:05 pm. In Blood Of Steel and The 2 Billion Dollar SuitChan shows all his versatility with two action titles with very different styles, one that mixes with science fiction and the other with comedy.

Also on Saturday (06), Megapix also highlights the feature Mama Mia!, at the Great Films Session, starting at 5:10 pm. The title is an adaptation of the homonymous musical piece and both were based on songs by the famous Swedish group Abba. The romantic comedy, about a bride who invites three men to try to find out who her father is, features a stellar cast with Meryl Streep, Pierce Brosnan, Colin Firth and Amanda Seyfried.

On Sunday (07), extraterrestrials will invade the channel in a non-stop schedule, starting at 11:35 am. The 80’s classic ET – The Extraterrestrial; Transformers – Revenge of the Fallen, by director Michael Bay; the suspense a silent place; and Worlds Wardirected by Steven Spielberg and starring actor Tom Cruise, are in the Aliens Special.

Tuesday’s attraction (09) is the suspense The Island (2019), from 9 pm. Starring Nicolas Cage, the plot tells the story of a young man who, in order to support his family, accepts a job in the home of a rich and mysterious couple. When accused of a murder, his interrogation ends up bringing information about another crime that may be related to that mansion of horrors.

Fans of the famous British secret agent James Bond will not get up from the couch on Wednesday (10) with the super Marathon 007, starting at 07:00. Megapix features eight films in the franchise starring stars Pierce Brosnan and Daniel Craig. Starting with Brosnan in 007 Against Goldeneye up until 007 – A New Day to Die and closing with four titles by Craig, from 007 – Casino Royale a 007 Against Specter.

Five friends invade a cable car on New Year’s Eve. To everyone’s surprise, they are trapped in the harsh environment outside. That’s when they start an unprecedented fight for survival.

Lin Dong is a special forces agent who clashes with a never-before-seen gang to defend a scientist and his powerful invention. 13 years later, Lin is dedicated to protecting young Nancy, who is being pursued by the same group and with whom he feels a strong connection.

Jimmy Tong is a driver for a millionaire who owns a special suit. When the boss has an accident, the chauffeur has a chance to put on the suit and discover that it gives him special powers.

On a paradise island in Greece, Sophie is getting married and wants the presence of her unknown father. By stealing her mother’s diary, the young woman discovers three possible candidates and secretly invites them to the celebration. Lots of music, drama and fun will pack the events until the big day. Nominated for two Golden Globes, including Best Picture – Comedy or Musical.

Young Elliott befriends a small alien who has been stranded on Earth. Determined to protect his new friend, he tries to get the alien back safely to his home planet.

Transformers – Revenge of the Fallen

Sam finds himself again in the middle of the conflict between the Autobots and the Decepticons. This time, his mind holds the secrets that could prevent the Fallen’s resurgence.

The world has been taken over by terrifying creatures that launch deadly attacks at the slightest sign of noise. In this scenario, the couple Evelyn and Lee Abbott try to protect and raise their young children, Regan, Marcus and Beau, under total silence in a climate of extreme tension. Nominated for a Golden Globe for Best Original Score.

A man has the opportunity to improve the bad relationship with his children. But when he needs to get them back to his ex-wife, a powerful alien attack arrives on Earth.

Buddy is interrogated about a death that happened while taking shelter at Walter’s house during a hurricane. With clues pointing to him, Buddy must tell him about a risky bond he created there.

James Bond must prevent control of the Goldeneye satellite from falling into the wrong hands and putting the world’s electronics at risk. For this, he will have the help of Natalya, a computer expert.

James Bond discovers that media mogul Elliot Carver has set up a project to manipulate the superpowers in order to open up more space for their business. Bond must stop this sick plan from culminating in a new world war.

Agent James Bond is the bodyguard of Elektra King, the daughter of an oil tycoon who was brutally murdered. Bond has a duty to protect Elektra from the lunatic terrorist Renard, who craves control of the world’s oil and will stop at nothing to achieve his goals.

After breaking free from a North Korean prison, James Bond returns to action to pursue the evil Gustav Graves, who is developing a high-tech weapon capable of putting the entire world at risk. The film marks the last adventure of 007 with the interpretation of Pierce Brosnan.

In his first mission as 007, Bond must spy on a mysterious terrorist, but not everything goes as planned. To get around the situation, Bond will have to beat a terrorist banker in a game of poker.

While investigating the person responsible for the previous events in Montenegro, James Bond discovers a betrayal within MI6 by a dangerous organization. In his new mission, Bond meets the brave Camile, who leads him to a brutal businessman who is at the forefront of the mysterious network of corruption.

When shot on a mission, James Bond disappears and is presumed dead. However, when MI6 is bombed and M is targeted by a resourceful enemy, 007 returns to do his duty and protect M while all British intelligence tries to restructure.

After fulfilling a mission on his own in Mexico, James Bond is suspended and starts to be monitored by M. With the help of Q, the agent goes after clues that lead him to discover the secret organization Spectre. Now he needs to escape these criminals and stop them from completing their plans.