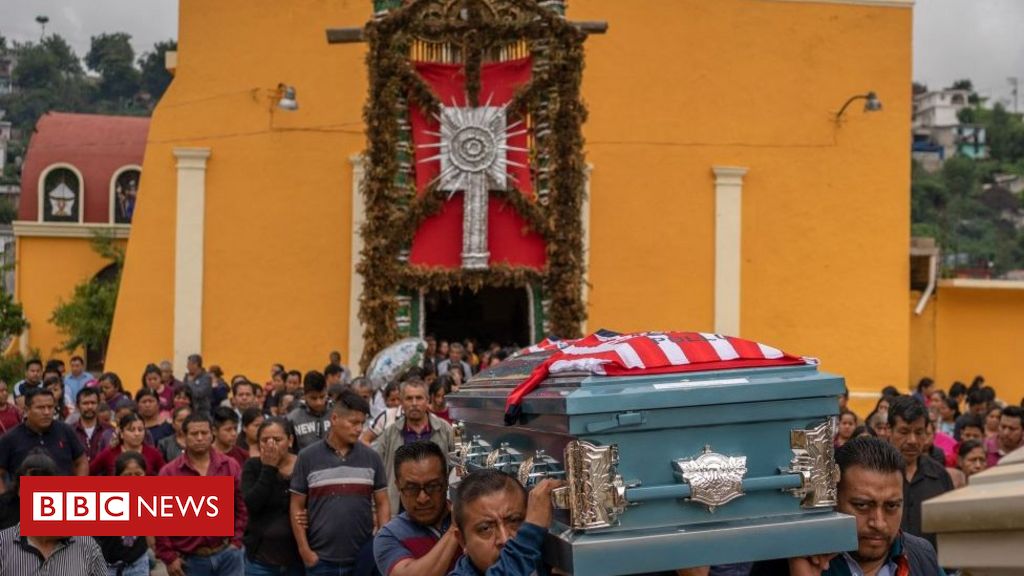 The ‘American dream’ that ended in tragedy 1,300 km from home

Outside the Olivares family home in San Marcos Atexquilapan, Mexico, the air was thick with wood smoke mixed with incense.

Three huge crowns leaned against the front of the modest two-story townhouse. The ceremony was a tribute to Misael, Yovani and Jair.

The photographs of the three cousins ​​were at the center of the flower arrangements. Their smooth features and wrinkle-free faces revealed how young they were when they set out on their fateful journey to the United States a few weeks ago.

Misael and Yovani were 16 years old. Jair, the eldest and Yovani’s brother, was 20.

They were too young to die. Their bodies were dumped inside a truck with no oxygen and no water on a deserted road in San Antonio, Texas, about 1,300 kilometers from the family’s home.

The three bodies returned to the Mexican city from which they came, with their coffins side by side in the front room of the family home.

And the entire community of San Marcos Atexquilapan attended to express condolences and support the grieving family.

“In a way, I’m a little calmer now because I was so worried about them,” said Yolanda, the mother of the two brothers, as a steady stream of villagers passed by to light candles at a small altar.

Uncertainty about the children’s whereabouts was replaced by a deep sense of loss.

“Even though I know I’ll never see them again, at least I’ll have a place to cry for them and bring them flowers,” she said.

There, some men were cutting the meat of six pigs to be served to those present at the wake. They were donated by local farmers.

The women cooked the pork in a spicy stew served with tamales and washed down with copious amounts of sugary sodas.

It was food to comfort a community that desperately needed some relief.

The hectic activity in the kitchen and traditional funeral rites provided a distraction for the family.

The Olivares left the city in search of better job opportunities.

They weren’t running from violence or organized crime. They were not political exiles nor did they seek asylum from persecution.

They were just young people waiting to get to Austin, Texas to earn money to send to their families in Mexico.

The goal was to find new perspectives on life beyond the lack of opportunities in the place where they were born.

It is a story that communities in the mountains of the state of Veracruz know very well.

“We knew the risks, but they had seen other people arrive (to the United States), including young women, and that motivated them to try too,” explained Yolanda, serene despite the pain.

“They had plans. They wanted to build a house, open a business, not just sit here and make shoes.”

The town of San Marcos Atexquilapan basically survives from the shoe and boot production line, which runs in many homes with workshops in the living room.

“We can make 80 pairs in a good day,” said Tomás Valencia, a cousin of the Olivares brothers, as he used a compressed air machine to put soles on work boots.

Low income led Tomás to consider taking the same risky trip as his cousins, a temptation that apparently crosses the minds of almost every young person in the city.

But after only getting married a year ago and seeing his relatives face a terrible death on the way, he decided to stay in Mexico. At least for a while.

These family-owned shoe factories, the mainstay of the city’s economy along with agriculture and livestock, are no match for the attractive steady work paid in US dollars.

“If things continue as they are, we’ll probably end up like some other towns around here: a ghost town,” said Juan Valencia, a retired shoemaker who left the trade when he started to lose his eyesight. “Only the old ones will stay. All the young ones will be gone.”

He believes that unless large-scale shoe factories are established in the region, there will be little reason to stop young people from migrating to the US, especially given the economic downturn caused by the Covid-19 pandemic.

Valencia’s 26-year-old son is currently on his way to the US. He hasn’t heard from him in eight days.

“I’m not too worried, but after what happened you think about it,” he said. “I’d be lying if I said otherwise.”

It was not a surprise for Misael’s father, Gerardo Olivares. He claims that the fact that his son’s journey ended so tragically doesn’t discourage others from trying to travel. And he doesn’t think they should stop doing it.

“Young people should pursue their dreams,” he said. “Only God knows our future. Only he knows how things end. It’s not the same tragedy for everyone. Everyone has their own destiny.”

After people ate at the wake, church bells rang and the young people’s parents, uncles and friends carried the three coffins on their shoulders.

The procession traveled through the city to the church, and the population sang a religious hymn as they walked behind the coffins, many drying their tears.

Perhaps they thought that, with a little twist of fate, the young people might as well have made it to Texas. Now they could be looking for work instead of being buried in their hometown.

After the mass, bottles of brandy and beer were distributed to people who needed a strong drink after an emotionally draining day.

One of the young men’s uncles, Oscar, played a video on his cell phone. It was the last contact the family had with them during the trip.

They were lying on twin beds in a cheap motel or immigrant shelter somewhere in northern Mexico.

Shirtless in the stifling heat, they were smiling and waving to their family in Veracruz.

Not long after the video was made, Jair, Yovani and Misael were loaded into a truck and traveled with hope, only to have their dreams erased along with those of 50 other people.