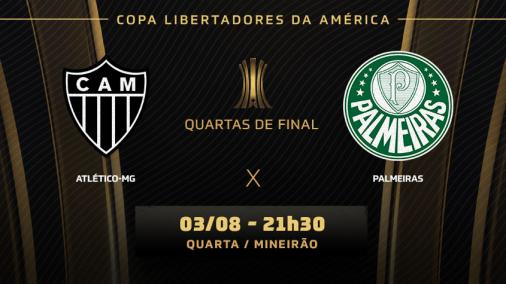 Atlético-MG vs Palmeiras: probable teams, embezzlement and where to watch the duel for Libertadores

Atlético-MG and Palmeiras start this Wednesday the search for a spot in the semifinal of the 2022 Copa Libertadores. At 9:30 pm, at Mineirão, Cuca and Abel’s teams meet again in the competition for the first leg of the quarterfinals.

> Remember 15 historic duels between Brazilians in Libertadores!
> See the biggest stadiums in the world

Despite coming off a 3-0 defeat to Internacional in the Brasileirão, Galo ended the group stage of the continental tournament as the leader of Group D, with 11 points. In the round of 16, they eliminated Emelec-EQU with a draw away from home and a triumph at Mineirão.

Coach Cuca, who returned to the Minas Gerais club last week, will have some problems for the confrontation. The midfielder Allan still needs to serve suspension in the competition after being punished by the Disciplinary Commission with two games for an elbow in a throw without the ball in the duel of the round of 16.

In addition to him, side Guilherme Arana, who was substituted with muscle pain in the team’s last match, should be left out to continue in physiotherapy. Midfielder Matías Zaracho, preserved in the game in question, may also be absent due to the muscle strengthening process.

> Check out the complete Libertadores table and simulator!

The reinforcement Pavón is not on Atlético’s list of entries for the next phase, as he also needs to serve a six-game punishment by Conmebol due to a confusion while he was still at Boca Juniors-ARG.

Palmeiras, in turn, is coming off three consecutive victories in the Brazilian Championship. In Libertadores the campaign is even better. Abel’s team has won all eight games played so far, with 33 goals scored and only three conceded.

Despite having recovered from an injury to his left thigh and already starting the physical transition, forward Rony did not travel to Belo Horizonte and will not enter the field.

This is the only problem for the Portuguese coach who, in addition to being able to count on the debuts of Merentiel and Fláco López in the competition, has maximum strength for the duel.

In the 2021 semifinal, Palmeiras qualified and won the title later, after two draws (due to the away goal criterion). On the other hand, the general retrospect shows a balance. In 76 clashes between Galo and Palmeiras, there are 34 Alviverde triumphs, 16 draws and 26 Atlético victories.

Embezzlement: Ron (physical transition)
Suspended: There is not