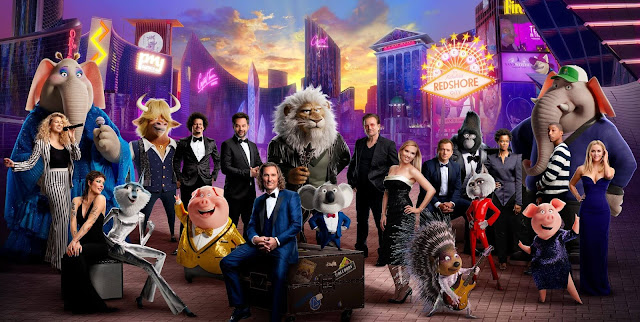 Check out the August premieres on Telecine

This August, the koala Buster Moon and the troupe of talking animals are back in Telecine Premium in a new adventure and ready to let their voices go. From the special effects to the all-time hit score, the animation single 2 is the Superpremiere on the 20th and features contagious musical numbers dubbed by national and international stars, such as Reese Witherspoon, Scarlett Johansson, Matthew McConaughey, Bono, Tori Kelly, Taron Egerton and Pharrell Williams in the original version. In Brazil, Sandy, Fiuk, Wanessa Camargo, Any Gabrielly, Lexa, Fábio Jr. and Paulo Ricardo lend their voices to the characters, stars from the fictional city of Redshore.

the suspense The Silence of the Rain is a novelty on the 3rd. Competing for the Brazilian Cinema Grand Prix in 11 categories, including Direction (Daniel Filho) and Supporting Actress (Cláudia Abreu), the feature is inspired by the novel by Luiz Alfredo Garcia-Roza and features Lázaro Ramos as Espinosa , the famous inspector of the writer’s works. With his duo Daia, a police officer played by Thalita Carauta, the detective investigates the mysterious death of a businessman, Ricardo (Guilherme Fontes), and its consequences.

On Saturday, the 6th, there’s more of Brazilian cinema on Telecine Premium: I’m Ryca! two arrives at the Super Premiere session, guaranteeing a lot of fun for comedy fans. After getting rich in the first film, in this sequel, Samantha Schmütz’s Selminha goes back to her origins. And if the character’s motto was to squander, this time, she is to save, with the new twist in her life. The production also brings together Katiuscia Canoro, Rafael Portugal, Marcello Melo Jr. and Evelyn Castro.

With Bruce Willis in the cast, it’s adrenaline for sure. On the 13th, it’s the star’s turn to take care of the Superpremiere with Death’s Escape, thriller with the Première Telecine label that mixes action and suspense. Jack is an ex-cop who comes out of retirement to help a young girl escape corrupt guards. The film takes place in a remote Georgia desert and begins when Shannon (Jaime King), during a tour of the place, catches Tom (Tyler Jon Olson) and Billie (Lala Kent) in an illegal action.

On Friday, the 26th, the premiere of Justice Beyond the System brings drama and a dash of science fiction to the night of Telecine Premium. Adapted from the award-winning book of the same name by Sergio de la Pava, the film explores how the life of Casi (John Boyega), an idealistic young New York City public defender, is transformed when he loses a case and tries to take on the American justice system. The production has the Première Telecine seal.

For those who enjoy sports and overcoming plots, the exciting true story of a rowing team takes to the screens at the Superpremiere on the 27th. Champion’s Heart, also under the Première Telecine seal, Michael Shannon is a coach willing to inspire young athletes to discover their own potential and, consequently, find their paths. Among the highlights of the cast, Alexander Ludwig, Alex MacNicoll, Andrew Creer, David Cade and Thomas Kasp.

26/8 – Premiere Telecine | Justice Beyond the System

Previous is it worth buying now? What’s different?
Next Full of familiar faces from Botafogo, Atlético-GO wins historic victory on Luis Suárez’s opening night for Nacional-URU