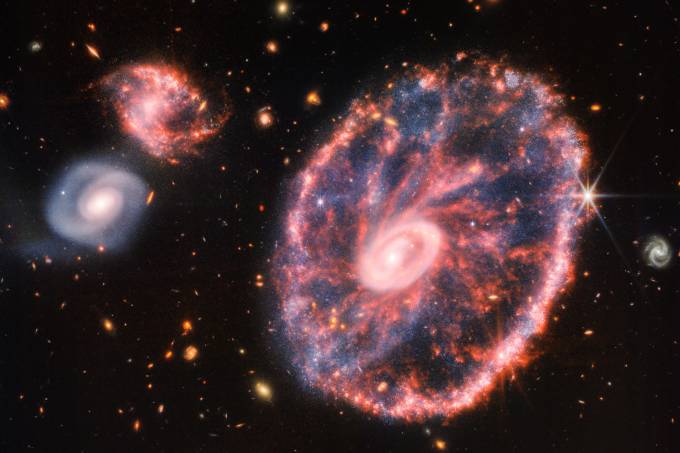 The ring-shaped galaxy seen in the new Space Telescope image James Webb released this Tuesday, 2nd, is a rarity. Located about 500 million light-years away in the constellation of the Sculptor, the Car wheel it has this shape as a result of a high-speed collision between a large spiral galaxy and a smaller galaxy not visible in this image released by NASA and the European (ESA) and Canadian (CSA) space agencies.

The Car Wheel has not only retained much of its spiral character, but has also experienced major changes throughout its structure. It is possible to identify individual stars and star-forming regions within it. The bright core is home to a supermassive black hole surrounded by a large amount of hot gas and dust.

The brightest areas host populations of older stars, while the outer ring, which has expanded for about 440 million years, is dominated by the formation of new stars and supernovae. As this ring expands, it penetrates the surrounding gas and triggers star formation.

Other telescopes, such as Hubble, have already examined the Chariot Wheel. Webb, with its ability to detect infrared light, now reveals new aspects of it. The Near-Infrared Camera (NIRCam), Webb’s main imager, sees in the infrared range. In this image, the NIRCam data is colored in blue, orange and yellow. The galaxy displays many individual blue dots, which are individual stars or pockets of star formation.

Capturing finer details about the dust that inhabits the galaxy, however, requires Webb’s Mid-Infrared Instrument (MIRI). MIRI data is colored red in this image. They reveal regions within the Wagon Wheel rich in hydrocarbons and other chemical compounds, as well as silica dust, like much of Earth’s dust.

Webb’s observations show that the Car Wheel is in a very transitional stage. The galaxy, which was presumably a normal spiral like the Milky Way before the collision, will continue to transform.