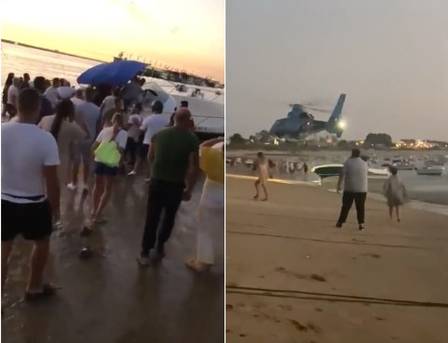 The Spanish police managed prevent dozens of people from looting a boat who ended up having an accident during police chase in Sanlúcar de Barrameda beach, in the province of Cádiz (Spain), last Friday (29/8).

During the chase, the pilot of the boat with the drug ended up bogging down in the sand in an attempt to escape. Residents and tourists took advantage and ran towards the vessel.which was initially guarded only by a Customs Police helicopter.

The helicopter kept moving in circles to chase away the looters. Civil Guard and National Police agents arrived in support by land and managed to disperse most marauders. Watch below:

I’ve been working in Sanlúcar de Barrameda and I’ll tell you some anecdotes from Barrio Alto that you might surprise. Basura containers sometimes disappeared. The reason: the people buried them in their gardens to hide the drug bundles

Currently, marijuana is decriminalized for personal use in private locations if the user has 100g or less of the herb. Clubs where customers can bring their own supplies, as long as the legal maximum amount is respected, have become popular in major Spanish cities.

Below, police helicopter scares off looters:

The silence of the government happens that drug trafficking is a lost cause.

Civil Guards and National Police, abandoned and unprotected, both in Campo de Gibraltar and in this province.

Nonetheless, drug trafficking remains a serious crime, for which you could face being sentenced to pay a fine of 30 thousand euros (R$ 161 thousand). In addition, those accused of trafficking can also face three to six years in prison.

Previous Williams takes a wave and announces Albon renewal for F1 2023 – Formula 1 News
Next On TikTok, everything that Hailey Bieber shows becomes a trend – Beauty