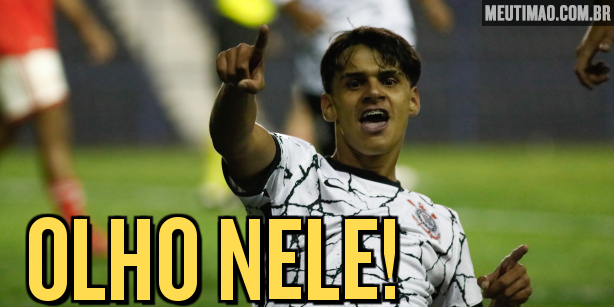 This Tuesday, at Fazendinha, Corinthians made its debut for the Brazilian Under-17 Championship and drew 2-2 with Internacional. One of the authors of the goals of Timão was the young Guilherme Henrique, only 15 years old, who also assumed the artillery of the category in the current season.

For the Corinthians Under-17, the youngster reached his seventh goal in 14 games with the category this season. The number of goals put him on an equal footing with midfielder Adryan as the top scorers of the team coached by Guilherme Dalla Déa. In addition to the seven goals, the player still adds two contributions through assists.

The numbers become even more impressive when taking into account the age of the Timão striker. Born on December 26, 2006, Guilherme Henrique is the youngest player in the Corinthians Under-17 squad and is enjoying his first season with the youth team.

The sudden protagonism of the striker has already aroused more attentive eyes internally at Corinthians. This season, even at age 15, Guilherme has already been used by coach Danilo on two occasions with the U-20 team.

Guilherme’s highlight has been since 2021, when he played for the U-15. Alongside Pedro and Bahia, who are part of the 2006 Brazilian National Team, he became the team’s main player in terms of number of goals scored. There were 12 balls in the net and seven assists in 24 games played throughout the year.

Timão’s Under-17 team returns to the field next Saturday, when they visit Novorizontino, for the Paulista Championship. The tendency is that Guilherme Henrique is out of the duel, since three days later, Timãozinho enters the field to play against Palmeiras, for the Brasileirão of the category.