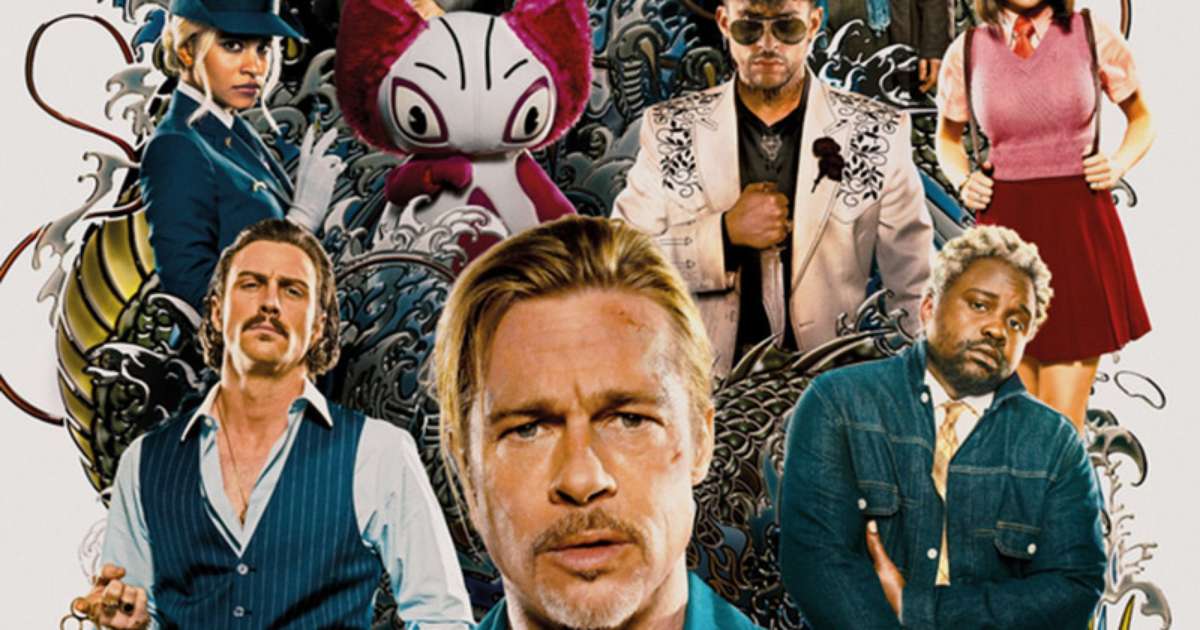 Launching in a thousand screens, “Bullet Train” is the main opening in theaters this Thursday (4/8). The production indicated for fans of action and Brad Pitt brings the actor fighting nonstop – and without much story – in sequences so intense that they become tiring. The American critics got sick of the beating, leaving the film with only 57% of approval, according to a survey by the aggregator Rotten Tomatoes.

The second biggest launch is the national comedy “O Palestrante”, which occupies 580 rooms. A curiosity is that the film starring Fábio Porchat and Dani Calabresa has the same theme as a French premiere, “Tralala”: mistaken identities.

There are 9 novelties in all, including the first animated feature from Pernambuco, but most of them arrive on a very limited circuit. Check out the trailers and details below.

Brad Pitt’s new movie is an action bullshit, which features one fight after another, from beginning to end of the projection. The plot is this: the Oscar winner for “Once Upon a Time in… Hollywood” exchanges punches, kicks, stabs and shots with varied opponents for the possession of a mysterious briefcase. He plays an unlucky hitman, who boards a bullet train in Japan with a simple mission. But he soon discovers that he is not the only assassin with the same goal, which leads to widespread conflict during the trip.

Cartoonish to the point of looking like a violent cartoon, the thriller is based on a bestseller by Kôtarô Isaka (“A Pierrot”), which was adapted by screenwriter Zak Olkewicz (“Street of Fear: 1978”) and featured an expert in bludgeoning director, David Leitch (“John Wick”, “Deadpool 2” and “Fast & Furious: Hobbs & Shaw”).

Fábio Porchat lives an accountant with no prospects, recently fired and abandoned by his fiancée, who on an impulse assumes another identity, when she sees a sign with a random name at the airport in Rio. But he ends up, unknowingly, taking the place of a motivational speaker hired to cheer up a company’s employees. He has to put them all up the moment he is down.

Dani Calabresa also stands out in the cast as the employee who welcomes him and soon becomes the romantic interest and real motivational incentive for the character to insist on the farce.

The French musical comedy follows Tralala, a singer from the streets of Paris who takes seriously the message “Above all, don’t be yourself”, left by an unknown young man. When a 60-year-old woman mistakes him for her own son, who disappeared 20 years ago in the United States, he decides to take on the role.

The film is directed by Arnaud Larrieu and Jean-Marie Larrieu, and marks the duo’s third collaboration with Mathieu Amalric. The previous one was nine years ago, in “Love is a Perfect Crime”, which also featured Maïwenn in its cast. In addition to them, the production features Mélanie Thierry (“The Zero Theorem”), Denis Lavant (“Holy Motors”) and Josiane Balasko (“It’s All Included!”).

Filmed by a Frenchman, starring a Ukrainian and set in South Korea, the thriller follows a tense investigation into international organ trafficking. Olga Kurylenko (“007 – Quantum of Solace”) plays a French forensic expert who helps a detective in Seoul with a murder case, which soon turns out to be part of an intricate trafficking ring for clandestine transplants.

The low-budget horror follows a mother and daughter who struggle to escape an abusive relationship. Both are in a hotel that has been infected by a mysterious airborne virus, killing them all quickly. In this isolated and desperate space, fear goes viral as women try to escape for their lives.

An extra actor in “X-Men: Days of Future Past”, Francesco Giannini ended up winning an award for his directorial debut at the Canadian horror festival Blood on Snow.

The animation is a film based on the Pernambuco animated series broadcast by TV Brasil. Created by Erickson Marinho, Marcos França and Ulisses Brandão, the attraction is aimed at children from six to nine years old and has the premise of re-presenting the main legends of national folklore, such as Saci, Cuca, Curupira and Boitatá, with a new clothing – and like children.

The film’s plot explains that a sacred book brings together all these legends and is kept secret and hidden in the Heart Mountain of Brazil, which is only revealed once a year, on October 31, Saci’s day. But the date is forgotten by many Brazilians, who prefer to celebrate Halloween. Taking advantage of this, a trio of American Halloween monsters decide to come to the country with the idea of ​​capturing the secret book and thus “dominating” Brazilian legends. But by carelessness the book ends up falling into the hands of the boy Lucas, a fan of superheroes, comics and games, who unknowingly becomes responsible for protecting part of national folklore.

Directed by Marília Mafé and Marcos França, “Além da Lenda” is the first animated feature from Pernambuco and has voiceovers by Gabriel Leone (Lucas) and Hugo Bonemer (Curupira).

The independent production of filmmaker from Maranhão Rafaela Gonçalves opened the Rio LGBTQIA+ Film Festival 2022 and follows the story of reporter Julião Siqueira (Ruan do Vale). Tired of being the joke at the station where he works, the journalist sees in the story of drag queen Lohanny (Frimes), involved in a human trafficking case, the opportunity to be taken to the series. The detail is that, to do the report, he needs to enter the drag universe.

The documentary by Petrônio Lorena (“O Gigantesco Ímã”) follows the daily life of lowland football played in the Santo Amaro neighborhood of Recife. Dreams, realities and feelings of referees, players and players share the ball with the memories of famous names who passed through the neighborhood such as four-time world champion Ricardo Rocha.

A record of the clashes between Culture and the Brazilian extreme right, the film by the trio Dellani Lima (“As Faces do Mao”), Henrique Zanoni (“No Vazio da Noite”) and Ricardo Alves Jr. (“Elon Não Acredita na Morte”) brings together fundamentalist protests, a Nazi speech by the Secretary of Culture and the attack on Porta dos Fundos to compose a mosaic of the escalation of extremism in the country, in its attacks against the arts and the LGBTQ+ community. In contrast, it also offers images of resistance to intolerance and attempts at censorship by the Bolsonaro government.