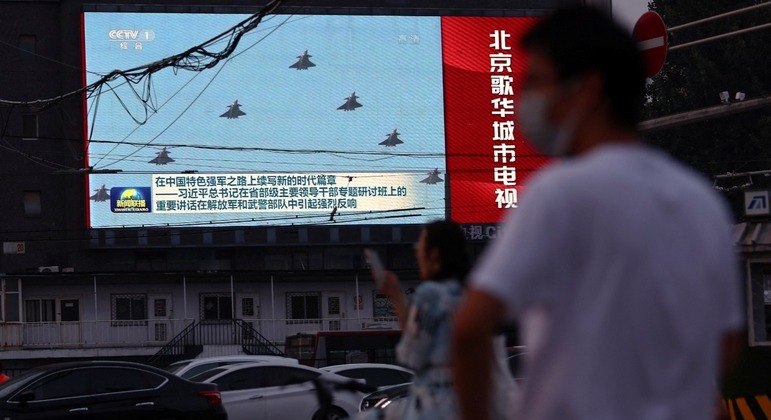 China fired “multiples” ballistic missiles in waters off Taiwan on Thursday as part of its military exercisesTaiwan’s Defense Ministry said, condemning what it described as “irrational actions that undermine regional peace”.

“The Communist Party of China fired several Dongfeng ballistic missiles into the waters around northeast and southwest Taiwan at approximately 1:56 pm (local time),” the Defense Ministry said in a brief statement.

In a show of force, the Chinese government decided to launch its biggest military exercises in decades around Taiwan after a visit to the island of US House Speaker Nancy Pelosi.

The live shooting exercises began around 12:00 pm (local time) and will last for three days until the same time on Sunday, August 7, according to state television CCTV.

“Six major areas around the island were chosen for this combat exercise and during this period, ships and aircraft will not be able to enter air and sea spaces,” added CCTV.

Pelosi left Taiwan on Wednesday at the end of a less than 24-hour visit that angered Beijing, which considers the island part of its territory.

The House Speaker, second in line to the presidential succession, is the most senior US official to visit Taiwan in 25 years.

Pelosi assured that her presence was to “make it clear, unequivocally”, that the United States “will not abandon” Taiwan.

In response, China promised to punish those who offended it and announced military exercises in the waters around Taiwan, which include some of the world’s busiest shipping lanes.

On Pingtan, a Chinese island located near the exercise area, AFP journalists saw at around 1:13 pm (local time) several unidentified projectiles soar into the sky, followed by a trail of white smoke.

Tourists who were on the beach of this popular island witnessed the shooting. Shortly before, military helicopters had flown over the area towards the Taiwan Strait.