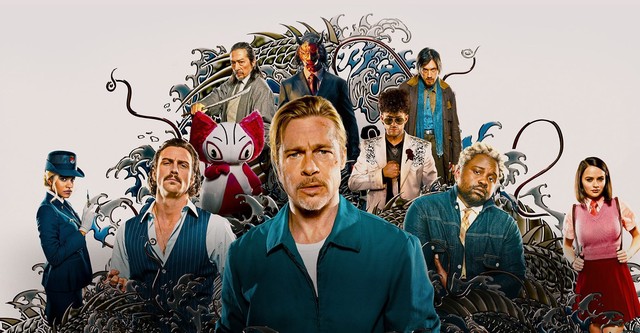 Brad Pitt is back on the big screen with his new action movie: Bullet train. The film premiered this Thursday (4) at the cinema in Juazeiro do Norte. Another premiere is of a national comedy with Fábio Porchat and Dani Calabresa: The Speaker. still on display Thor: Love and Thunder, Minions 2: Origin of Gru and The Black Telephone.

Brad Pitt has been reducing his film roles in recent years and focusing more on producing than acting. His last film as a protagonist had been Once Upon a Time in… Hollywood (2019), but now the actor has returned with an action-comedy movie that entertains and takes your breath away at the same time. In Bullet train, Pitt is an unlucky assassin who just wants to do his job right and stay out of trouble when he’s recruited by Maria Beetle (Sandra Bullock) for a seemingly simple job: finding a suitcase on a bullet train in Japan and getting off the train with it. The problem, which he didn’t know, is that he will have a lot of competition to get the briefcase.

The film still has a great cast, such as Brian Tyree Henry, Aaron Taylor Johnson, Joey King, Zazie Beetz, among other cameos. There are four sessions, three of which are dubbed (3 pm, 5:40 pm and 8:30 pm) and one subtitled (9 pm).

This film features Fábio Porchat and Dani Calabresa in a romantic comedy – that’s right: it’s not just a comedy. Here, Porchat is Guilherme, an accountant who was fired and replaced by his wife, and who travels to Rio de Janeiro and, when he sees a woman with a plaque, introduces himself as the person the woman was waiting for. That woman is Denise, played by Dani Calabresa. And Guilherme becomes a motivational speaker. And of course that’s going to be a problem, right?

The film initially shows a Thor who, after everything he’s been through in the MCU, now doesn’t want wars anymore, but instead wants to promote peace and self-knowledge. However, a deadly threat will make him enter a battle alongside the Mighty Thor, Valkyrie and Korg and that promises lots of love, thunder and rock ‘n roll, in a film that keeps the brand of director Taika Waititi, who revolutionized the world. hero in his third film (Thor: Ragnarok, 2017) and returns in this new adventure trying to bring new elements and nuances to the plot and look of the film.

Thor: Love and Thunder features appearances by Guardians of the Galaxy, led by Peter Quill (Chris Pratt), in addition to the returns of Tessa Thompson as Valkyrie, Taika Waititi as Korg and Natalie Portman as the Mighty Thor. The villain of the film is Gorr, The Butcher of the Gods, played by Christian Bale and undoubtedly one of the highlights of the feature.

After the release of My favorite evil, in 2010, the Minions became a fever. The success was so great that a franchise was born there that already has two sequels, in addition to the first film of the minions in 2015 and a short film released in 2018 called Yellow is the new black (alluding to the series Orange is the new black).

Now the adventure of the yellow multicellular beings, who only want a villain to call their own, will take place in the 1970s, showing more of the childhood of Gru, the evil favorite of the Minions, who will go on an adventure to save the little villain after an interview. from “job” to being super-villain doesn’t turn out as expected. In the schedule, there are three dubbed sessions for the film, at 14:20, 16:30 and 18:40

This is the new thriller/horror from Scott Derrickson, director of The Exorcism of Emily Rose (2005). 13-year-old Finney Shaw is kidnapped by a sadistic serial killer played by Ethan Hawke. (The Predestined), which locks him in a soundproof basement. To escape imminent death, Finney relies on, shall we say, unusual help: the voices of the serial killer’s previous victims, who speak to the boy through a black phone – unplugged – and his sensitive sister, who tries to unravel her strange dreams for her. find it.