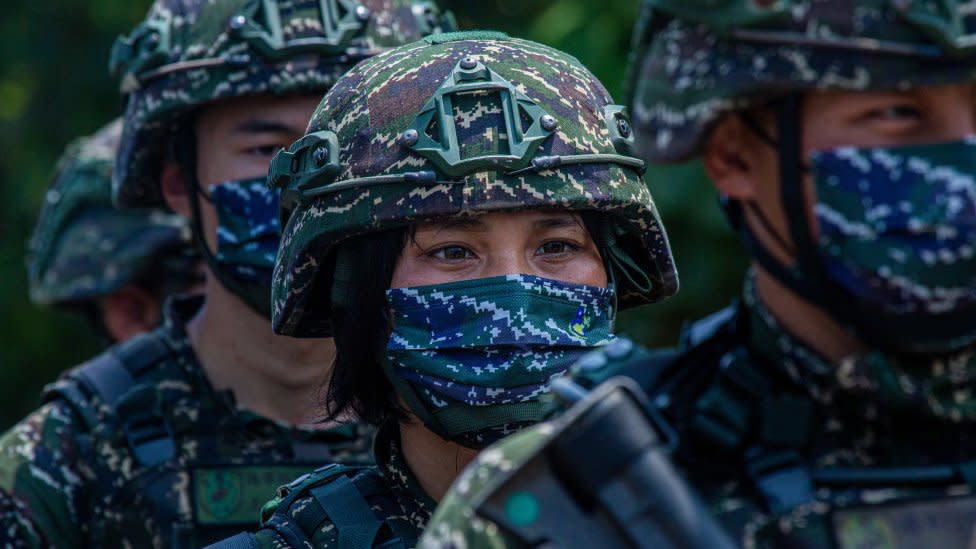 China is carrying out the biggest military exercises in its history along the coast of Taiwan, an island it considers part of its territory.

The maneuvers, which Beijing launched in response to US House Speaker Nancy Pelosi’s visit to the island, include missile firing at sea and incursions into Taiwan’s airspace.

Tensions between China and Taiwan have been growing for decades, so much so that the possibility of an invasion by China’s powerful People’s Liberation Army is something few people discount.

If China were to invade Taiwan, an asymmetric war would be unleashed, that is, a conflict in which one of the parties has a much greater military force than the adversary.

It’s the kind of war we’re seeing between Russia and Ukraine, and it showed us that the imbalance of forces isn’t always reproduced in the results on the field.

Would it be very different in the case of a Chinese invasion of Taiwan?

China — with a population of 1.4 billion compared to Taiwan’s 24.5 million — has a defense budget 13 times that of its neighboring island, and it also vastly outperforms it in troops, equipment and weapons.

Conscious of its disadvantage in an asymmetrical war, Taiwan adopts the so-called “porcupine strategy”.

When it feels in danger, the porcupine lets go of its spines to deter stronger predators.

“The pain of stepping on the animal’s spines becomes the main deterrent to crushing it,” explains an editorial in the Taipei Times.

And if the predator still decides to attack the porcupine, it will suffer painful punishment and eventually give up.

Taipei’s strategy is based on these assumptions, and was confirmed in its 2021 Quadrennial Defense Review.

“Resist the enemy on the opposite bank, attack him at sea, destroy him in the coastal zone and annihilate him at the bridgehead”, is what this manual proposes.

To face an asymmetrical war, Taiwan does not prioritize acquiring expensive fighter jets and submarines, but rather deploying mobile and hidden defensive weapons such as anti-aircraft and anti-ship missiles.

Three Layers of Thorns for China

Zeno Leoni, an expert on international order, defense and China-West relations at King’s College London University in the UK, analyzed the three layers that make up the Taiwanese porcupine strategy.

“The outer layer is intelligence and reconnaissance to ensure defense forces are fully prepared,” he explained in an article on Taiwan’s defense doctrine for academic news website The Conversation.

For decades, Taiwan has developed a sophisticated early warning system to avoid the surprise effect of a possible lightning strike from China.

Thus, Beijing “would have to initiate any invasion with an offensive based on medium-range missiles and air strikes to eliminate Taiwan’s radar facilities, airstrips and missile batteries.”

To respond to such an attack, the porcupine’s middle tier consists of deploying naval forces for guerrilla warfare at sea with the support of combat aircraft provided by the United States, according to the expert.

Small, agile vessels armed with missiles and aided by helicopters and land-based missile launchers would try to prevent the Chinese Army fleet from reaching Taiwanese territory.

Or that, if he succeeded, he would pay a high price in human and material losses.

“Geography and population are the backbone of the third defensive layer,” explains Leoni.

Formosa’s complex terrain, with steep mountains, few beaches suitable for landing and a large part of its urbanized territory, would give the defenders an advantage and could multiply the casualties of the invader.

Furthermore, despite the mighty Chinese army being up to 12 times more numerous in troops than Taiwan’s, the Taiwanese have more than 1.5 million reservists who would enter combat if Chinese troops tried to invade the country.

Mobile, versatile and easy-to-conceal weapons would also be crucial in the third layer, as demonstrated in Ukraine with the Javelin and Stinger portable missile systems, which have been a nightmare for Russian planes and tanks.

What would the US do?

And if China decides to invade Taiwan, would the United States join the war? Would they send troops or weapons? Would you take other types of measures?

The truth is, we don’t know, and the US doesn’t want us to know.

As Taipei perfects its porcupine strategy, Washington clings to so-called “strategic ambiguity” in its relations with China and Taiwan.

This means that the United States intentionally hides its plans of action in the event that China invades Taiwan.

“Somehow, this ambiguity … has allowed us to maintain peace and stability in the Taiwan Strait for several decades and in various governments,” White House national security adviser Jake Sullivan recently declared.

In May, US President Joe Biden surprised by stating that his country has the “commitment” to come to Taiwan’s defense, although he later amended it by assuring that there were no changes in the “strategic ambiguity”.

This stance not only seeks to dissuade China from invading Taiwan, it also dissuades Taipei from proclaiming its independence (Beijing has threatened to attack if they do) by failing to secure US intervention.

Some US lawmakers have urged the country to shift its stance towards “strategic clarity” to deter China as the Asian giant increases its pressure on Taiwan and its military presence in the region.

In any case, few believe that the US would stand idly by in the face of an invasion.

“You never tell your potential opponent what you intend to do. But I suspect that anything that is implemented to deter China in the first place and to thwart an attempt to take over Taiwan would not just be military,” Chris explained to the BBC. Parry, a strategy analyst at the North Atlantic Treaty Organization (NATO), a western military alliance.

“It would be something multidimensional that would include commercial, financial and informational approaches.”

China’s show of military force is disrupting the routine in Taiwan, where the mood is more outrage than panic.

Shipping and airlines suffered major disruptions, with boats docked at the port and flights canceled after Beijing restricted access to areas around the island for their manoeuvres.

– This text was published in https://www.bbc.com/portuguese/internacional-62421629

Previous OnePlus 10T: top of the line regressed to also reduce the price | hands-on video
Next The 10 Best Romance Movies to Watch on Amazon Prime Video