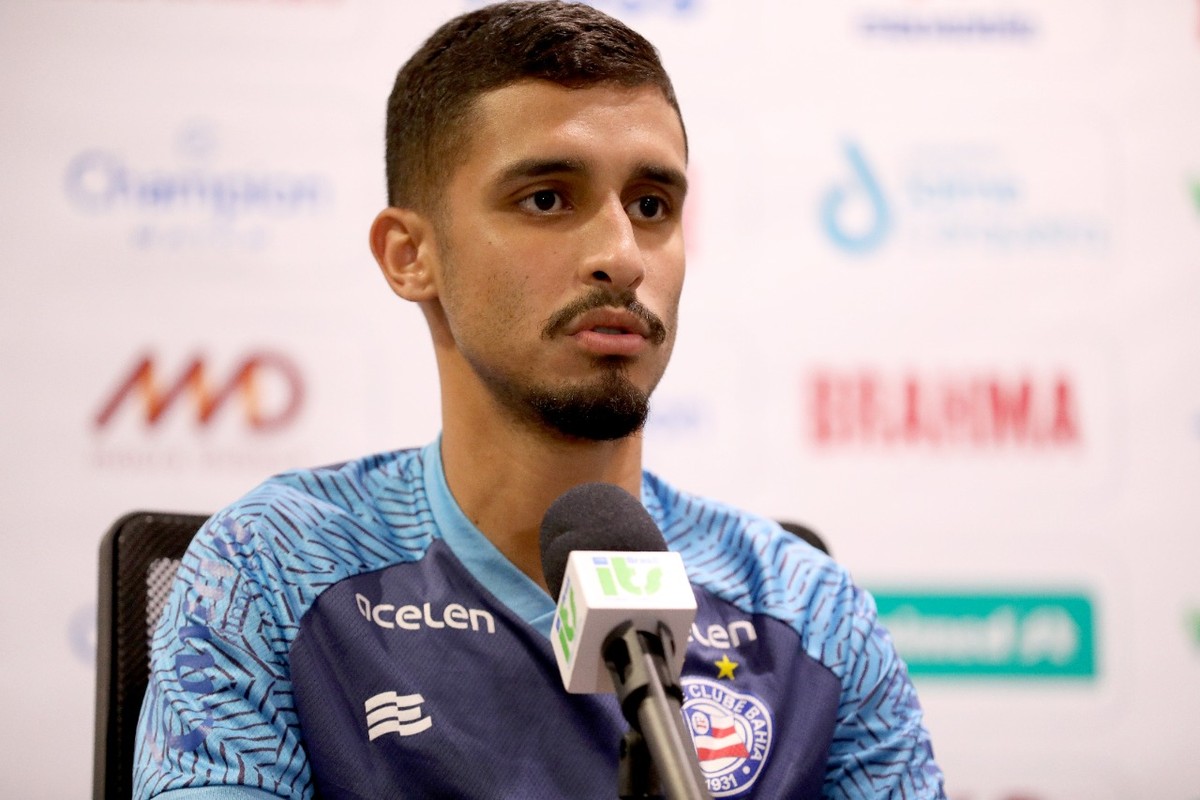 Bahia’s creative reference for the year, Daniel says he can work alongside Ricardo Goulart | Bahia

With the absence of Bahia in the victory over Náutico, in the last round, because of tonsillitis, Daniel trained normally during the week and should be a starter for Tricolor in this Saturday’s game, against CSA, for round #22 of the Série B of the Brazilian Championship . In a press conference this Friday, at CT Evaristo de Macedo, the midfielder guaranteed that he can, yes, play alongside Ricardo Goulart, the main signing of the Bahian team in 2022.

– His arrival is very good, he is a very high level player, with a lot of quality, he does not need to comment. Only Bahia wins. Everyone is here with access thinking, and I’m sure we can work together. I’m sure I can do more than one position, he too. This will be more for Enderson Moreira when deciding which scheme Bahia will play.

Daniel at a press conference at Bahia — Photo: Publicity/EC Bahia

Both athletes are midfielders, but Daniel can play a more defensive role, while the new hire has characteristics closer to the qualities of a striker.

It is worth remembering that Daniel is the team’s leader in assists in 2022, with five goal passes.

Ricardo Goulart is regularized and ready to make his debut for the Bahia team. Another athlete available to coach Enderson Moreira is Lucas Mugni, who served suspension in the triumph against Náutico. For Daniel, the two players give a lot of quality to the team in the creative sector.

– Always good to have quality players like Goulart, Mugni, who create plays, who help you, when you have the ball. I’m sure that Goulart’s arrival will help the whole team, raise the level. I hope everything works out and we get our access.

+ Biggest signing of the year at Bahia, Goulart arrives in search of a sequel to shine again

Bahia and CSA face each other at 4:30 pm this Saturday (from Brasília), at Arena Fonte Nova. While Tricolor, which has 37 points, can be vice-leader of Serie B if they win the game, the team from Alagoas, with 20 points, tries to leave the relegation zone. Even so, Daniel knows that it is necessary to have the maximum attention during the duel.

– We have to forget about this part of the table a little, everyone has already gone through what the CSA is experiencing now. We know that, away from home, they won’t have that pressure from their fans and that can make them feel lighter. We have to be very connected to not be surprised in this game.

“Very good week, full week, Enderson was able to work on many things, alternatives, he also focused on the physical part” – said Daniel.

With one victory and one defeat in the second round, Bahia runs after another positive result. For Daniel, it is possible to do an even better campaign in this second half of the Series B. In the first round, the Tricolor scored 34 points.

– I think so. We had a very good first round, but we missed points, we sinned in many games by little, by details. Two defeats at home, important points. I think, yes, that you can make a better second round.

See other excerpts from Daniel’s interview

reinforcements
– Being very good, quality reinforcements. Training is disputed, players looking for a gap, this also helps nobody to settle down and this is very good for the team, for the club, in the search for access, and I hope everything goes well.

Care not to be surprised
– We have to be very connected, respecting CSA as if it were Cruzeiro, which is the leader of the championship. Enter with the same focus, attention, not to be surprised, not to leave behind. Put pressure on them, we’ll be at home, and I hope we leave with the three points.

Expectations for the game with a full house
– We always want big games, a crowded stadium, at the top of the table, being able to be vice-leader of the championship again. Seeing the mobilization of the crowd motivates you a lot for the game, you can’t wait for the game to come to run, to see the crowd singing. And we are very confident and we are going in search of triumph.

Previous Kevin Bacon sings Tears for Fears classic on TV along with Jimmy Fallon; video
Next In China, anyone who wants to be the first to receive the Moto Razr 2022 can now book