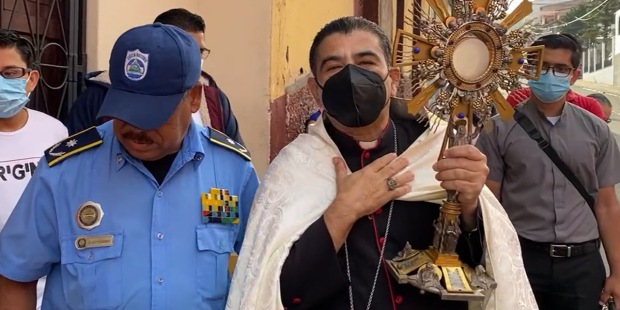 bishop faces the police with the Blessed Sacrament in hand

In recent days, hostile actions against Church members in Nicaragua have intensified, including the closing of Catholic radio stations.

One image made a big impact in Nicaragua, where Catholics are suffering harsh persecution from the regime of Daniel Ortega. The Bishop of the Diocese of Matagalpa, Monsignor Rolando Álvarez, left in procession with the Blessed Sacrament in hand after the police prevented him from entering the curia to celebrate Mass as usual.

“I went out and there was already a group of believers who were worshiping the Lord. [Os policiais] was going through their things, they asked for their identity card, but they wouldn’t let them in [na cúria]; and when I left there was already a group of faithful singing to the Lord, so I ordered the Blessed Sacrament to be brought so that we could pray here, to bless the faithful”, highlighted the bishop.

Monsignor Álvarez, who has long been protesting the Ortega dictatorship, stood up to the police and paramilitaries who surround and blockade the episcopal curia region, as reported by local media.