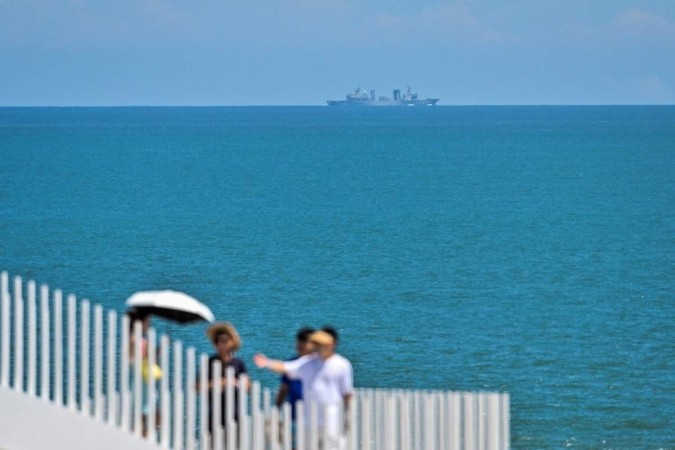 China suspends partnership with US government in five areas

As the People’s Liberation Army (PLA) continued unprecedented military exercises at six points around Taiwan, China’s Ministry of Foreign Affairs suspended cooperation with the United States on global warming, repatriation of illegal immigrants, legal assistance in criminal matters, and combating transnational crimes and anti-narcotics. The decision by Xi Jinping’s government surprised the US, which summoned the Chinese ambassador, Qin Gang, to provide an explanation.

National Security Council spokesman John Kirby told The Washington Post that White House officials told Qin that recent Chinese military actions — which included firing missiles over the main island of Taiwan — were “irresponsible.” and at odds with the long-standing US goal of maintaining peace and stability” in the region. Kirby asked China to stop the war maneuvers and reduce the spirits. “The Chinese can do a lot to reduce tensions by ceasing their provocative military exercises and lowering their tone,” he said.

Chinese Foreign Minister Wang Yi announced that his country would “suspend Sino-US negotiations on climate change” and cancel a meeting between military leaders, as well as two meetings on security. For his part, John Kerry, President John Kerry’s special envoy for the climate, warned of the consequences of the diplomatic measures adopted by China. “The suspension of cooperation does not punish the United States — it punishes the world, particularly developing countries,” said the American.

Kerry called the announcement of the “unilateral” suspension of bilateral climate work “disappointing and misguided”. “The climate crisis is not a bilateral issue, but a universal one. It is not about geopolitics or ideology. No nation should impede progress on transnational existential issues because of differences.”

The retaliation for US House Speaker Nancy Pelosi’s visit to Taiwan went further. A Chinese foreign ministry spokesman said Beijing had adopted sanctions against the congresswoman and her family “in accordance with the relevant laws of the People’s Republic of China”. Measurements were not detailed. According to the spokesperson, while disregarding China’s grave concerns, Pelosi insisted on the visit.

The Secretary-General of the United Nations (UN), António Guterres, expressed concern about the intensification of diplomatic tensions between the US and China. “For the Secretary-General, it is not possible to solve the world’s most pressing problems without dialogue and effective cooperation between the two countries,” said spokesman Stéphane Dujarric.

Hungarian Zsuzsa Anna Ferenczy – a professor at Dong Hwa National University in Hualien (Taiwan) – reminded the Courier that relations between China and the United States were dominated by “intense and hostile rivalry” even before Pelosi’s visit. “Beijing is aware that, for Washington, securing a leading role in the Indo-Pacific region is a strategic objective, something that Beijing also wants for itself, in its own way. China wants to see its ‘neighborhood’ free of influence and, instead, design their own. In this contest for influence, Taiwan is at the center of the competition,” he explained.

According to Zsuzsa, the US and China perceive each other as revisionist powers with regard to the Taiwan Strait. “Beijing accuses Washington of supporting Taiwan’s independence, something the White House rejects. The Joe Biden administration also insists it has the right to cooperate with Taiwan,” she said. She bets that, in the absence of official dialogue and with the steps towards escalation taken by China in the region, the distance between Chinese and Americans tends to increase. “I expect an even greater escalation from China, which will use a wide range of mixture and tactics. All of this is dangerous and destabilizing. It is difficult to say what, at this stage, will allow de-escalation and a return to dialogue”, concluded the statement. Hungarian expert.

“Based on Beijing’s long-standing rhetoric about Taiwan as a non-negotiable and strictly domestic issue, I’m not surprised that China resorts to all coercive tactics more intensively, including economic and military pressure. ‘national rejuvenation’ agenda on ‘reunification’ with Taiwan, something considered absurd as the Chinese never ruled the island. Any country committing to Taiwan is unthinkable for Beijing.”