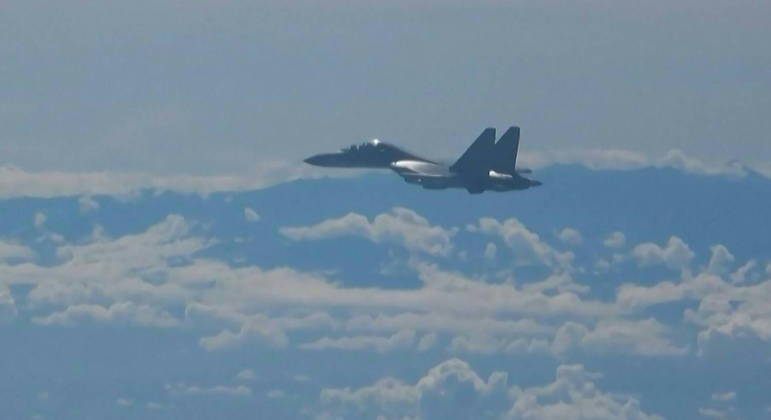 Taiwan on Saturday accused China of staging an attack on its main country as Beijing intensified its retaliation for US deputy Nancy Pelosi’s visit to Taipei, the Taiwanese capital, which led to the suspension of cooperation with the United States in key issues.

Beijing continued on Saturday with some of its biggest military exercises around Taiwan, aimed at practicing a blockade and invasion of the island, analysts said.

Taipei forces “detected several groups of communist planes and ships carrying out activities around the Taiwan Strait […]which was interpreted as a simulated attack on the main island of Taiwan,” the Taiwanese Defense Ministry said in a statement.

“In the waters around the island of Taiwan, more than 10 Eastern Command battleships and marine escorts approached from different directions to carry out containment operations,” the Chinese military’s Eastern Command said in a statement about the exercises.

Overnight, Chinese forces released video of a pilot recording the island’s coast and mountains from his cockpit, showing how close Chinese forces had come to Taiwan.

The Army’s Eastern Command also shared a photo allegedly taken from a warship patrolling near Taiwan, which clearly showed the island’s coastline.

Chinese state television CCTV reported that Chinese missiles flew directly over Taiwan during the exercises, although this has not been confirmed.

Beijing also said it would hold a live shooting exercise in the southern Yellow Sea – located between China and the Korean peninsula – between this Saturday and Aug.

Despite China’s threats, Taiwan maintains its defiant tone, insisting it will not bow to “evil neighbor”.

Relations between the two superpowers have worsened after Pelosi, who is Speaker of the House of the United States, visited the autonomous island that China considers part of its territory.

The environment has become the latest casualty in the geopolitical battle, with Beijing saying it would withdraw from cooperation negotiations and agreements with Washington, particularly on climate change and defense cooperation.

Both countries, the world’s biggest polluters, have pledged to work together to accelerate climate action and meet regularly to tackle the crisis, but the deal now looks uncertain.

The scale and intensity of the Chinese exercises have drawn criticism in the United States and elsewhere. The White House summoned the Chinese ambassador to Washington on Friday to complain about Beijing’s actions.

US Secretary of State Antony Blinken, meeting with his Filipino counterpart in Manila, said Washington was committed to “acting responsibly” to avert a crisis.

“Maintaining peace and stability in the Taiwan Strait is critical not just for Taiwan, but for the Philippines and many other countries,” Blinken told reporters after meeting Enrique Manalo.

A day earlier, Blinken issued a statement with the foreign ministers of Japan and Australia asking China to halt its military maneuvers.

But beyond the military exercises, Beijing’s decision to withdraw from the climate cooperation agreement also raises fears.

John Kirby, a spokesman for the US National Security Council, called the decision “fundamentally irresponsible”.

For his part, UN Secretary-General Antonio Guterres warned that the two superpowers must continue to work together for the good of the world.

“For the Secretary-General, there is no way to solve the world’s most pressing problems without effective dialogue and cooperation between the two countries,” said spokesperson Stephane Dujarric.

Tensions over Taiwan, which have escalated to the highest level in nearly 30 years, and an imminent risk of a military conflict could deepen and make the relationship between China and the United States long-lasting.

“The relationship is very bad right now,” said Bonnie Glaser, an expert on China at the German Marshall Fund. The suspension on Friday of military and maritime dialogue between the two countries is “especially concerning,” she said. “We don’t know what they’re going to do anymore,” she added.

John Culver, a former CIA analyst for Asia, considered that Beijing’s main intention with the military exercises is to change the status quo. “I believe this is the new normal,” she assured during a debate organized by the Center for Strategic and International Studies.

“The Chinese want to show […] that a line was crossed with Pelosi’s visit” to Taiwan, he added.

Previous UN says there is risk of nuclear disaster
Next Dreams are the best show in the world. Here’s why you should write them