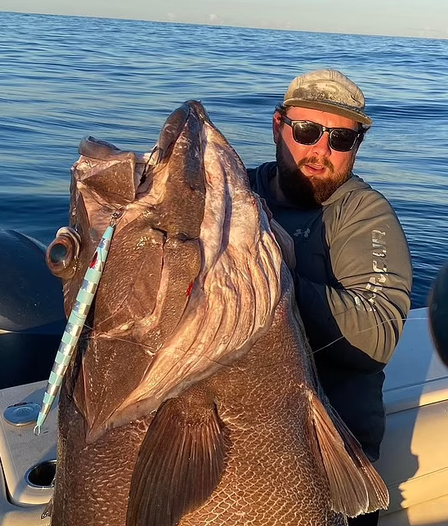 A fisherman shared on social media a photo of a giant fish weighing 80 kg and 1.75 m in length pulled by him in Brisbane, capital of Queensland, Australia, this weekend. The fishing was done with a 30lb line designed to handle a 14kg catch. The publication surprised followers on the internet.

Read more: ‘She’s hungry just like us’ says riverine who had a dog killed by a jaguar in the Pantanal

The giant fish is a grouper, which normally resides in ocean depths between 250 m and 600 m, with the largest recorded at a size of 200 cm in length and reaching 100 kg. The species has a worldwide distribution, in areas such as the US it is known as the “Atlantic wreck”.

The fisherman cast the line about 40 km from Point Lookout, north of Stradbroke Island, last weekend. In Australia, it is usually found off the coast of the lower parts of the country.

The repercussions on the networks, according to the Daily Mail online news, were divided between those who defended themselves and those who disagreed with the fisherman’s act:

“A worthy catch, must have been a struggle to get on the boat,” said one.

Others disagreed saying the fish was ‘magnificent’ and it was a shame it was caught:

“Please tell me it was released, it’s probably older than the fisherman who caught it and now it’s just a trophy,” commented another.

“Poor guy, I hope he was released,” agreed another. “I’m not an activist but this is sad,” added a third.

In defense of the fisherman, other fishermen pointed out that he was “obviously not aiming for that fish” considering the strength of the line being used. Another argued that it was the “best 30lb line in the world” for holding on.

Know more: Brit sentenced for killing woman who was pushed off pier in Scotland

Some commentators have pointed out that, unfortunately, the fish probably would not have survived being released because “a fish at these depths, if it is between 10 cm or 1 m, suffers barotrauma. The rapid change in pressure causes the gases in the fish’s body to expand, which is deadly,” explained one of them.

Although the fish, Queensland grouper, is surprising in size, catching it is illegal.