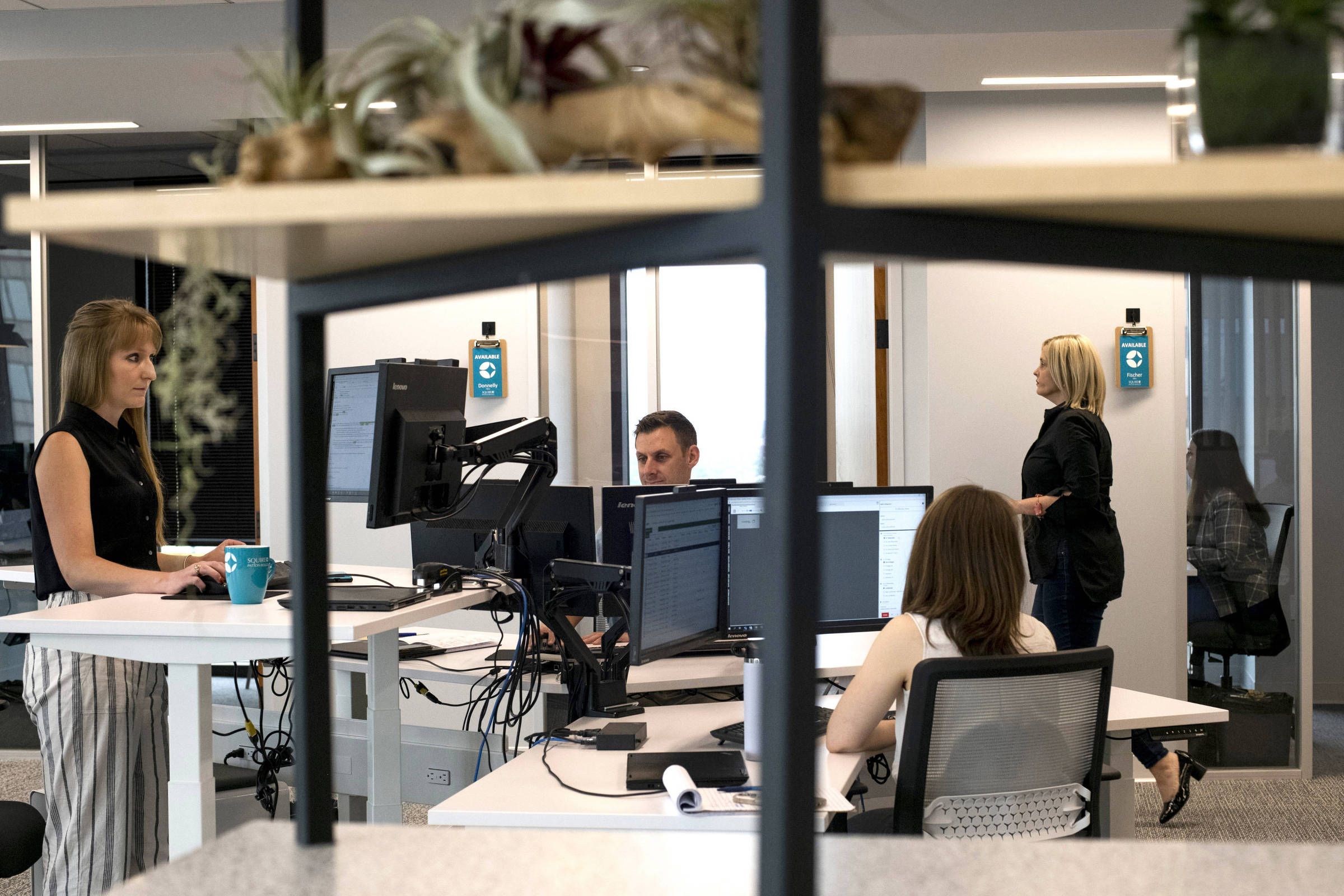 Competition for parking spaces is increasingly fierce. Displacements are advancing. The lounges at the workplaces are filling up with excitement as junior partners play skeet shooting. What discussion about going back to the office? In some parts of the country, this is already resolved.

“I don’t know almost anyone in Columbus who is completely remote,” said Grant Blosser, 35, who works at a financial services company.

In October 2020, Blosser began returning to his Columbus (Ohio) office five days a week. He joked with young analysts, one of whom recently dragged his team into hot yoga (it “kicked our asses”). He listened in the car to his book club selection (currently a biography of Winston Churchill). It was a relief, he said, to feel the “separation of church and state” that is leaving home every day.

“Almost everyone I know is in an office most of the time,” he said. “The news I’ve read about people dragging themselves back to the office is about some companies and some cities.”

More than two years after the pandemic, American corporate workplaces have fragmented. Some are almost as full as they were before Covid-19; others are abandoned, printers off and coffee cups gathering dust. Workers in mid-sized and small cities in the United States returned to the office in far greater numbers than those in larger American cities.

Some executives in big cities expect them to bounce back, though they’ve been held back by safety and health concerns about commuting on mass transit, as well as competitive job markets where employees are more likely to make decisions.

In small towns with less than 300,000 people, the share of full, paid days worked from home dropped to 27% this spring, from about 42% in October 2020. In the 10 largest US cities, days worked in home have changed to about 38%, up from 50% over the same period, according to a team of researchers from Stanford and other institutions led by economists Steven Davis, Nick Bloom and Jose Maria Barrero.

Offices filled up faster in areas where Covid lockdowns were shortest and where commutes are made by car, according to Davis. Many cities in California and New York, in particular, have taken longer to return to the office than Florida and Texas.

“‘Weird’ is a word. ‘Jealousy’ is one too,” said Bret Hairston, an office worker in Columbus, describing her feelings about going to an office regularly when she knew many people didn’t.

While some corporate executives have found themselves embroiled in tense discussions about the firm’s future, others are convinced that, for them at least, the debate is over. “In some ways, it’s an anti-story,” said Matt Lanter, 33, co-founder of OpenStore, a Miami-based e-commerce company whose 100 employees are in the office full-time. “There’s really nothing to talk about because people have literally been in the office for the last year or two.”

It’s not that civic leaders everywhere don’t want people back. It’s just that your ads are getting mixed results. “Downtown is back,” Columbus Mayor Andrew Ginther said this spring. “Back to work, back to fun.” Mayor Eric Adams told New Yorkers, “You can’t stay home in your pajamas.” However, many stayed.

The regional gap in return-to-office patterns is noticeable in the share of online job postings that allow remote work. In San Francisco, California, 26% of job openings now allow remote work, and in New York 19%. In Columbus, only 13% of job openings allow remote work; in Houston, the figure is 12.6%; and in Birmingham, Alabama, just 10.4%, according to another team of researchers led by Davis, Bloom and Raffaella Sadun of the Harvard School of Economics.

Some workers are crossing the line between these two countries. Ann Aly, who returned several years ago from Alexandria, Virginia to her hometown near Fort Myers, Florida, is the only person she knows who works remotely. She avoids driving anywhere between 7 am and 9:30 am, because the waves of public commutes create endless traffic. In the afternoon, she stops by the grocery store where she was a cashier, taking advantage of the short lines while the others are at work.

“A lot of people don’t really understand how this works: how do you work remotely? What do you do? And how do you manage not to take a nap in the afternoon?” said Aly, who works in technology. “I don’t really talk about it with neighbors unless they ask, because I don’t necessarily want to highlight these social differences.”

Americans have always experienced the workplace in entirely different ways: doctors spend long shifts on their feet, truckers on the road, and knowledge workers hunched over computers. But now people in the same profession can have very different work arrangements depending on where their desks are.

Gabe Tucker, 26, is an attorney at Fortif Law Partners in Birmingham, Alabama, where the percentage of job postings that allow remote work is about half that in New York. Every morning, Tucker puts on a dress shirt, drives for 15 minutes, and arrives at the office around 8:00. His routine, in other words, remains identical to what he had before the pandemic began (except for not having to wear a tie anymore). In the evenings, he and his colleagues sometimes have a drink to celebrate the closing of a deal. They returned to the office in June 2020, with masks and other Covid precautions.

“It’s a regular job, pretty much,” Tucker said. “We find it difficult to work remotely. We all like to be around each other.”

Some researchers fear that differing expectations about flexibility in the workplace contribute to yet another form of polarization in people’s lives during the pandemic.

“One of the things that control us is having to go to work,” said Bloom, a Stanford professor who studies hybrid work, explaining that for some people, workplaces no longer serve as a social anchor. “Half the country has a different experience than the other.”

Previous Apps that are on the Play Store and you shouldn’t keep it on your phone
Next Will Katniss Everdeen appear in the new Hunger Games movie? Find out which characters from the original franchise return – Movie News