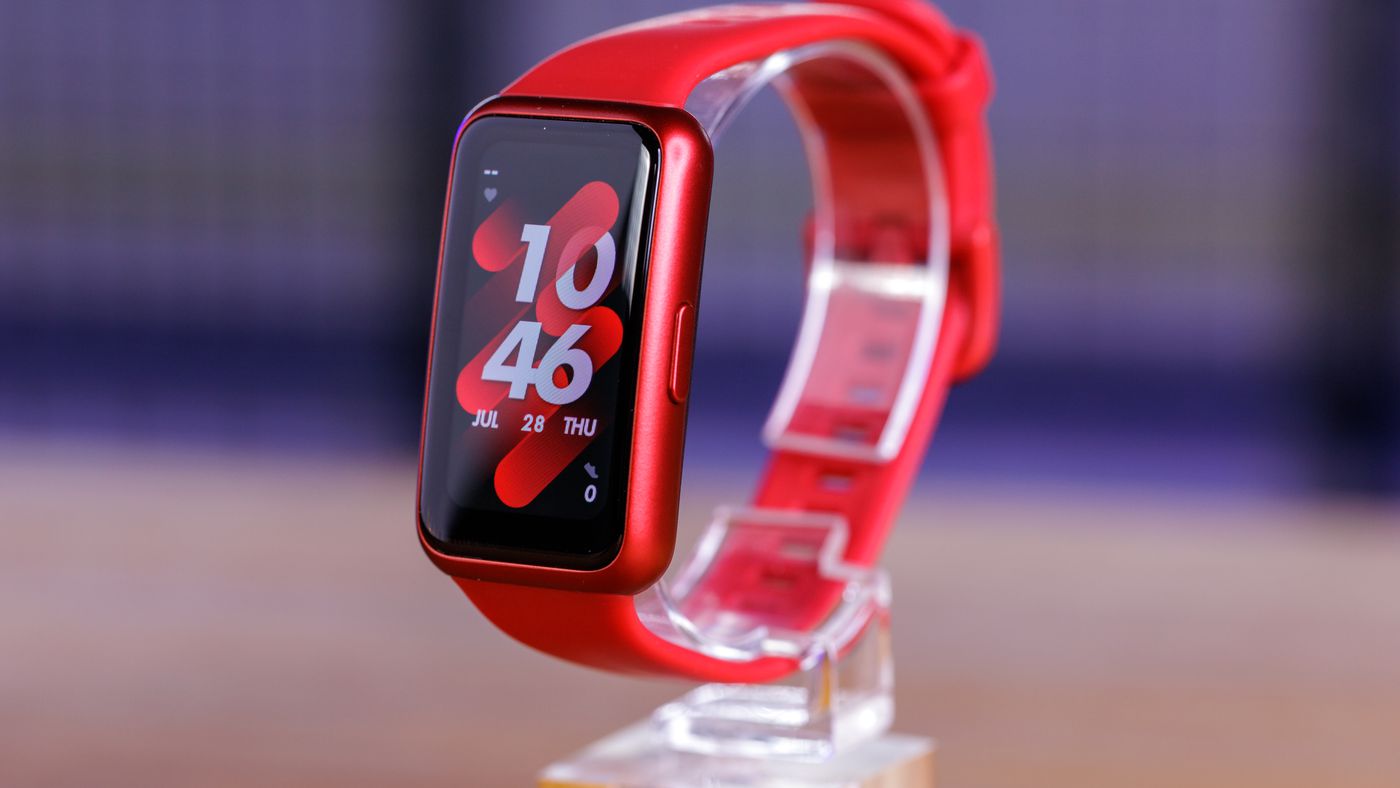 The Huawei Band 7 is one of the great competitors of the Xiaomi Mi Band 7. It arrives with the intention of becoming the ideal alternative for users who want a fitness tracker with a large screen to facilitate the viewing of content.

With more than 90 exercise options, this product stands out for delivering a set of cuts that have already made its predecessor an attractive purchase option among the smart bracelets sold here in Brazil with a greater focus on sports.

But is it worth buying the Huawei Band 7? Check out my opinion in the full review.

Another feature worth mentioning is the bracelet itself. Contrary to what some manufacturers do, the Chinese use straps similar to the ones we see on watches, and this makes it easier to fasten on the wrist, as well as adjust.

The plastic buckle gives the device more security, as the likelihood of a breakage — as we see in Mi Bands — is lower. In addition, this part of the accessory is removable for easy exchange for a more colorful or even personalized option.

On the side, there is only one button to access the menu and go back to the home page. On the back, there are sensors for monitoring the actions taken by users and two magnetic compartments for recharging the Huawei Band 7, and there is no need to take it off the bracelet to do so.

“The look of the Huawei Band 7 is one of the great strengths of the product. The smart bracelet has straps with more reliable attachment for long-term use without fear of losing it.”

The Huawei Band 7’s display has a 1.44-inch AMOLED panel. This display has a rectangular shape, and this facilitates the distribution of information in the product layout in a visually interesting way.

One of the biggest advantages of the Chinese giant adopting this material on the display is that the display of information is clearer. In addition, the brightness of the screen in brighter environments, such as in sunlight, is much higher and better.

Brightness settings range between numbers 1 and 5, and for my use level 3 is good enough. Another advantage is that the Huawei Band 7 has automatic brightness adjustment for the night. Thus, the lighting of the bracelet will not affect your eyesight when using it before going to sleep, for example.

As it is a colored panel, the visualization of colors also brings an attractive fidelity, especially for users who are exploring the 4000 background options — watchfaces — present in the product.

But unlike other manufacturers, Huawei charges for most of these dials. Consequently, you will have access to a limited number of free images or you will need to spend an amount that can vary between R$1.39 and R$20 for the customizations.

Another point to consider is the difficulty in finding the free watchfaces, as they are mixed with the paid ones and there is no search filter that facilitates the search for options that do not cost money.

One of the biggest problems with the Huawei Band 7 starts at the time of configuration. Even performing all the steps recommended by the brand, it was necessary to spend some time to pair the product correctly.

That’s because the version of the Huawei Health app — Health — that I downloaded was not correctly detecting the wristband before logging into the Huawei platform. In addition, the need to keep the cell phone’s GPS and Bluetooth on consumes more smartphone battery.

So, after logging in, it was possible to synchronize and rescue all the old data to have a benchmark of the current one with its predecessor.

The navigability in both the app and the bracelet did not receive significant changes, unfortunately. As it is a more system-focused update, I expected to have significant adjustments to the layout or even the way the bracelet works in general, even being able to copy Xiaomi models.

Fortunately, notifications are working correctly this generation. Regardless of how many messaging apps are active in Health, the bracelet receives messages and allows you to send automatic replies.

Huawei insists on defining sleep monitoring as an option based on “scientific” data, however, in practice, there is no possibility of this information being coherent. After all, to have such a foundation, it would be necessary for Band 7 to go through several regulatory processes.

And for that, one of the main bodies is the FDA (Federal Drug Administration). As it is an American company, the possibility of this information recorded on the product packaging being true is almost nil, as the Chinese company is not authorized to market its products in the US.

Therefore, the sleep monitoring obtained with the Huawei Band 7 is equivalent to that seen in other fitness trackers, such as the Xiaomi Mi Band 7. So, everything is based on estimated data and not on information that can be attached to a medical report.

Also, this rest time tracking has some pretty tricky flaws. Even sleeping an average of 7 hours a day, the smart bracelet stopped tracking information when I woke up at dawn.

I consider this a serious flaw in this monitoring, as other models of bracelets – older and cheaper – detect when the wearer wakes up and record it in the report, but go back to tracking sleep as soon as you sleep again.

With the popularity of NFC on the rise in Brazil, the absence of this feature in the global version is also an important negative point to be mentioned.

“The Huawei Band 7 has been updated and the notifications are working as expected. However, it has received few software tweaks compared to the Huawei Band 6. The same monitoring flaws found previously are present in this generation.”

For those who exercise, the Huawei Band 7 is still one of the best smart bracelets with a focus on physical tracking. Even without receiving significant improvements when compared to its predecessor, the fitness tracker fulfills this role well.

It is possible to track 96 exercises individually, and this allows the use of location to be a complementary element for tracing the areas you pass in outdoor activities, such as running and cycling.

Continuous heart tracking helps you know how your heart is doing during exercise, as well as at rest. In the main menu, there are only 10 options for tracking, but you can add or remove as many as you deem necessary.

The battery of the Huawei Band 7 is 180 mAh, which is the same amount present in the Mi band 7. However, this does not mean that the autonomy will be similar, since the system of each one can influence the time of use between charges.

However, Huawei promises up to 14 days of continuous use of the bracelet before needing to recharge. In my tests, however, with tracking and notifications turned on, the Band 7 used up 42% of battery in just 4 days.

This means that the estimated time for the fitness tracker to load zero is 9 days. Despite being an interesting number, it is still below the autonomy promised by the company. However, it is necessary to consider that the predecessor lasted, at most, a week. So there is a small improvement.

Despite the Huawei Band 7 having a different format from the Mi Band 7, Xiaomi’s smart bracelet is still its main competitor in the market. After all, Chinese products seem very similar in characteristics, but they are not.

Even with all the evolutions – some welcome and others not so much – the Xiaomi Mi Band 7 remains in the status of the best compact fitness tracker. Logging actions, particularly sleep monitoring, is more complete and automatic adjustments, such as the “do not disturb” mode, still work very well.

And in terms of exercises, the addition of more activities helps the product to stand out among those who practice sports with a focus on a healthy lifestyle. In addition, a big positive point of the Mi Band 7 is the price, as it is easy to find it below R$300 when buying directly in Brazil, which is a difference of almost R$50 compared to the Huawei Band 7, which costs R$300. $350.

The Huawei Band 7 has received several interesting upgrades, especially regarding how the notifications feature works. After all, the bracelet had undeniable flaws in its essential day-to-day functions.

The adjustments made to the body made the product even more beautiful, but the Chinese took care to improve the layout and improve the way in which some features work in favor of the user, such as the “do not disturb” mode, which still doesn’t work automatically.

However, keep in mind that the Huawei Band 7 is still great for physical activities, as the exercise tracking is effective and accurate. In addition, there are dozens of actions that can be monitored in order to increase usability.

But, considering all the features that are “forced” activated on the Huawei Band 7, it is better to choose to buy the Xiaomi Mi Band 7. In addition to having the guarantee that the features will work correctly, it is possible to save a little when it comes to purchase.

Do you prefer the alternative presented? Then check out the link with the best price!