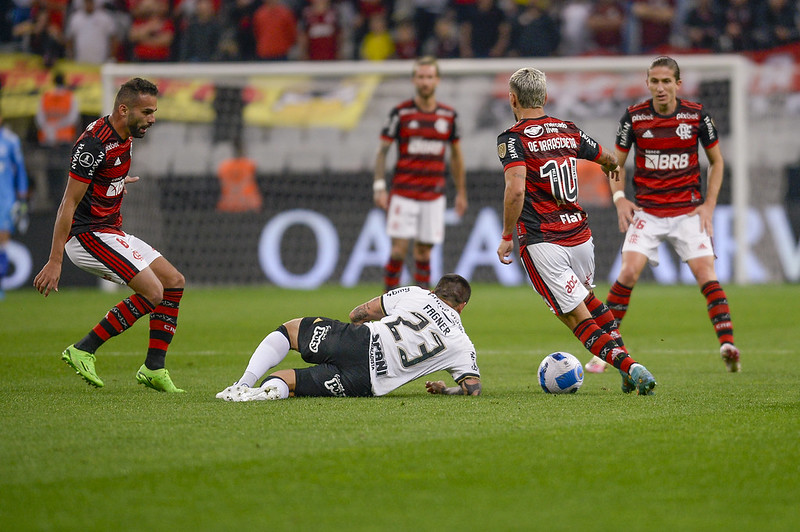 Journalist is outraged by Thiago Maia and defends Fagner

Reporter Vessoni, from the website Meu Timão, aimed at Corinthians fans, complained about an allegedly malicious entry by Thiago Maia, from Flamengo, in Maycon. The player ended up injured and became embezzlement for Corinthians. Therefore, the Corinthians player decided to comment on the bid.

Posting a video of the match on social media, the professional recalls the fame that Fagner, a side for Corinthians, has. Fans of several Brazilian teams question the player’s loyalty in the entries. Therefore, he reverses the picture and declares that if he were the side of the São Paulo team, they would be asking for ‘life imprisonment’.

“Maycon broke his toe in this entry by Thiago Maia. I just want to point out a little thing: if it’s Fagner X any Flamengo player… they would be asking for the life imprisonment of shirt 23 of Corinthians. Just for the record”, declares Vessoni.

In the responses, many counter the journalist and are not able to understand such a position. For most, it’s a move without malice, with Thiago Maia just having the misfortune to hit his co-worker’s foot. Watch the video:

Mengão beat Corinthias 2-0 at Itaquerão, last Tuesday night (2). That is, the Mais Querido arrives with an advantage for the return match, at Maracanã. While Arrascaeta and Gabigol scored the winning goals, the team concentrated for another decision.

The return game takes place next Tuesday (9), at 21:30 (Brasília time) and the arbitration is already defined. But before the return clash against the club from São Paulo for the quarterfinals of Libertadores, Flamengo has a commitment for the Brasileirão. The team led by Dorival Júnior will go to Morumbi to face São Paulo this Saturday (6), at 8:30 pm.

Previous Alice Braga recalls shyness when interviewed by Jô Soares
Next Can STJD expel Corinthians from the Brasileirão?