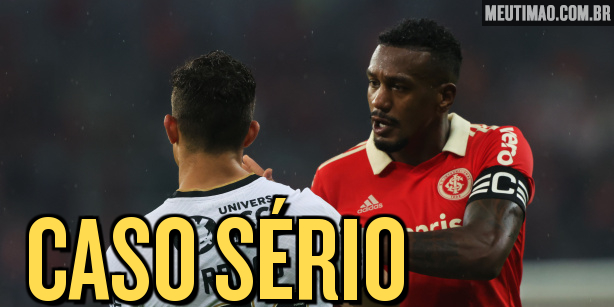 The investigation’s auditor, Paulo Sérgio Feuz, who investigates the complaint of racial slur involving right-back Rafael Ramos, from Corinthians, and midfielder Edenílson, from Internacional, concluded the procedure this Friday.

According to the auditor, they found strong evidence of racial offenses practiced by the player of the alvinegro team, which led Feuz to denounce the athlete based on article 243-G of the CBJD. The conclusion was forwarded to the Prosecutor’s Office.

The article in question provides, in case of punishment, the removal of Ramos from five to ten matches for the case of injury. In addition to this sports penalty, the side can still be subjected to a financial fine, which varies between R$ 100.00 and R$ 100,000.00.

“To practice a discriminatory, contemptuous or outrageous act, related to prejudice due to ethnic origin, race, sex, color, age, condition of elderly person or person with a disability: PENALTY: suspension of five to ten matches, if practiced by an athleteeven if an alternate, coach, doctor or member of the technical committee, and suspension for a period of one hundred and twenty to three hundred and sixty days, if practiced by any other natural person subject to this Code, in addition to a fine, from BRL 100.00 (one hundred reais) to BRL 100,000.00 (one hundred thousand reais))”, is what appears in the article in question.

The episode occurred in the duel Corinthians and Internacional, still in the first round. The game came to a halt when midfielder Edenílson exposed to the referee that he would have heard racist offenses from the Portuguese right-back.

The official expertise, carried out at the request of the Civil Police of Rio Grande do Sul in the case, stated that it was not possible to identify the word given by the Corinthians fan to the athlete from the Southern team. Even so, delegate Roberto Sahagoff, from the Rio Grande do Sul Police and responsible for investigating the case of alleged racial slur by Rafael Ramos against Edenilson, said he will indict the Corinthians player for the crime.

See the survey decision below.

“The STJD, as a adjudicating body, is limited to analyzing, prosecuting and judging, within its competence and attribution, in a independentmatters relating to sports competitions disputed and at disciplinary infractions committed by the natural or legal persons mentioned in art. 1, paragraph 1, of the CBJD, as recommended by articles 3, I and 24, of the aforementioned sports diploma.

The set of evidence prepared in this investigation, and especially the Labial Expertise hired by this Distinguished Court, showed that there is strong evidence of racial offenses arising from the Athlete RAFAEL ANTÔNIO FGUEIREDO RAMOS of the Sport Club Corinthians Paulista team, aimed at the athlete EDENÍLSON ANDRADE DOS SANTOSfrom the Sport Club Internacional team, which took place in the match held on 05.14.2022, valid for the Brazilian Championship – Serie A, between the Internacional (RS) and Corinthians (SP) teams.

In view of the foregoing and considering the set of probative elements capable of characterizing the practice of the sports infraction referred to in article 243-G, caput, of the CBJD, and the present investigation must be sent to the Sports Attorney General, for the measures of complaint to the athlete RAFAEL ANTÔNIO FIGUEIREDO RAMOSpursuant to article 82, paragraph 3, of the CBJD”, explained auditor Paulo Sérgio Feuz.

Previous Mission: Impossible 8 | Nick Offerman reveals details of his role
Next Still without Arana, Atltico trains with an eye on Athletico-PR; watch video