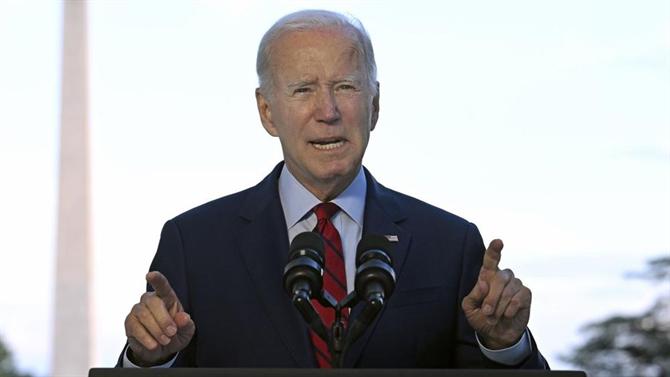 US President Joe Biden called “unacceptable” the sentence of US basketball player Brittney Griner to 9 years in prison by the Khimki Tribune, Russia, for alleged smuggling of banned substances, in a statement that further heightens tensions. between Washington and Moscow.

“Brittney Griner has been sentenced to a sentence that is yet another sign of what the world already suspected: Russia detained Brittney by mistake. It is unacceptable, and I appeal to Russia to release her immediately so that she can be reunited with her wife, close family, friends and teammates.” [das Phoenix Mercury, equipa da WNBA]», said the US President, in a statement issued by the White House, on the judgment of the base, two-time Olympic and world champion by the US.

US Secretary of State Antony Blinken, on the other hand, criticized the Russian legal system more severely, which provided for a penal framework of up to ten years in prison for the crime for which Brittney was convicted: the Prosecutor asked, in court, for 9 years and a half of effective imprisonment, Griner was sentenced to years.

“This conviction is a strong signal as to our concerns about Russia, its legal system and the Russian government’s resort to wrongful arrests in line with its own agenda, using individuals as political weapons.” said in the US capital Blinken, the Portuguese equivalent of Minister of Foreign Affairs.

Griner, who took advantage of the WNBA break between seasons to play for a few months at UMMC Ecaterimburo – Russian 1st division team -, was arrested on February 17 at Moscow airport for allegedly carrying a cannabis-based vaporizer in his luggage. , and waited six months for the start of the trial, consider themselves guilty and claiming to have “packed in a hurry” as a mitigating factor, in addition to ignorance of Russian laws.

The possibility of exchanging Brittney and Whelan for Viktor Bout, a Russian arrested for arms trafficking in the US, remains open and, at the White House, National Security Council (NSC) spokesman John Kirby, emphasized that «the ball is in Russia’s court».

With the Kremlin accusing the US of “megaphone diplomacy, which will not work or help”: the disclosure of plans in advance in such a delicate matter. Dmitry Peskov, the spokesman for Moscow, says that this dialogue between the two global superpowers “must be confidential”.

Brittney Griner’s team – who continues to see his salary paid by the WNBA to his wife, Cherelle -, the Phoenix Mercury, faced and lost (64-77) in the early hours of Friday (mainland Portugal time) with Connecticut Sun: before the game, the two teams observed 42 seconds of silence (42 is Brittney’s jersey number) hugging each other.

Diggins-Smith, a Phoenix Mercury player, told reporters, wearing a t-shirt with the message ‘We are BG’ [‘todos somos Britnney Griner, BG’] that “no one even wanted to play, as Brittney’s verdict was devastating, no one had a clear head, despite the attempt to honor her”.

“We will not allow it to be forgotten. Every day we are inspired by the strength of BG», reads a statement issued by the Phoenix Mercury in the ‘shockwaves’ of reaction to the sentence, with the coach of the team, Vanessa Nygaard, signing underneath.

“Griner’s verdict is unacceptable, heartbreaking! More so after hearing his words and apologies. We just want to send him the greatest strength, love and our solidarity”, said Nygaard.

In a joint statement, the commissioners of the men’s professional league (NBA), Adam Silver, and the women’s league (WNBA), Cathy Engelbert, also criticized the sentence. “Unwarranted and unfortunate, but not unexpected,” as Adam Silver summarized to CNN.

“The effort by the WNBA and the NBA to get Brittney back home safe and sound has not been exhausted. It is our hope that in the end Griner will return to the US,” she said.

Hope is rekindled in the US because the sentence has not yet become final: the Russian lawyers for Brittney Griner, Maria Blagovolina and Alexander Boykov, informed in a statement that they will appeal the decision, a measure for which they legally have ten days. after conviction: eight to go before the deadline expires.

“We are very disappointed with the verdict. As legal professionals, we believe that the court should be fair to anyone, regardless of nationality. The court completely ignored the arguments of the defense and, more importantly, the allegations of the defendant, who pleaded guilty. The sentence contradicts legal practice, the verdict is absolutely unacceptable.

“The average prison term applicable in such cases, with the accused plead guilty, is five years, not nine,” said Griner’s representative, Alexander Boykov, as he left the courtroom, quoted by the court, confirming that at the end of the trial, when returning to the cell, the basketball player still said loudly “I love my family”.

Blagovolina and Baykov, members of the Russian law firm Rybalkin, Gortsunyan, Dyakin & Partners, hope to finally get Brittney to speak to her family after more than 170 days in detention.

Previous With the peso crumbling, Brazilians feel like millionaires in Argentina
Next Marcos Braz opens the game about the attacker’s situation and comes out in defense of the crowd’s target