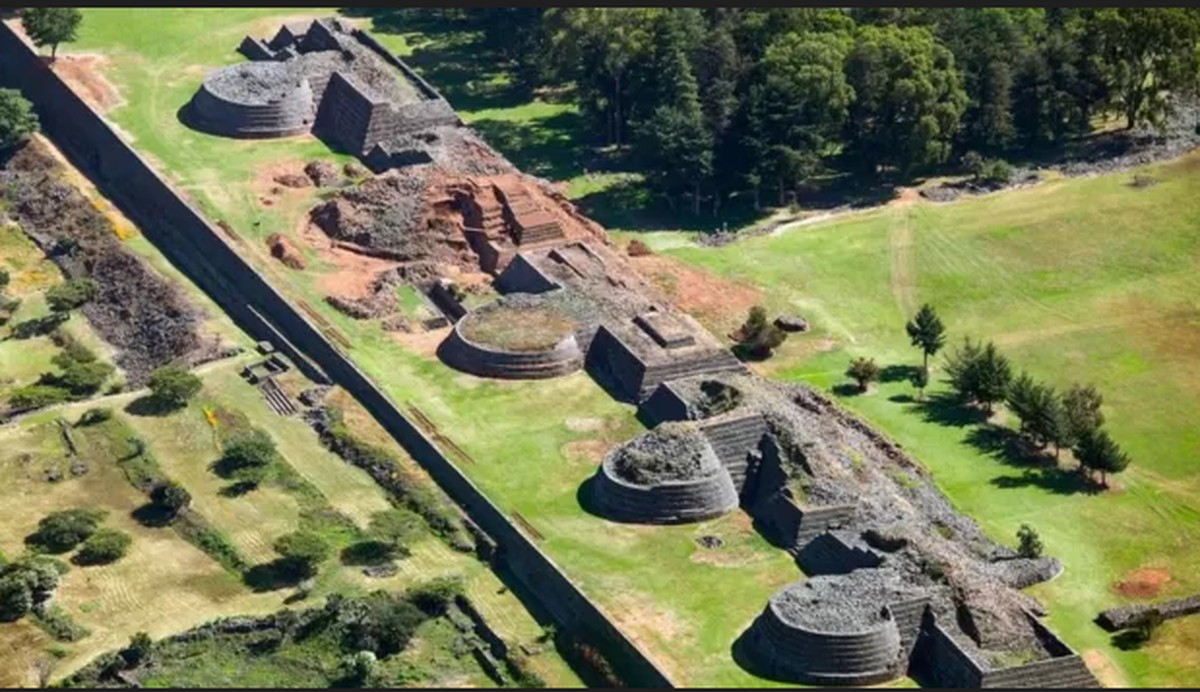 The Empire the Mighty Aztecs Failed to Conquer | World

“This is the legacy of our people,” my uncle would say as we admired the pyramids.

We were not in Egypt, but in the city of Tzintzuntzan, State of Michoacan, in southwestern Mexico.

The pyramids, or yácatas, towering before us were round and unique, made of volcanic stone—perhaps the best-preserved relics of the Purépechas, a pre-Columbian indigenous group that once ruled here, but most of the people don’t know. In fact, I had never heard of them until a few months ago, when I discovered that I am a direct descendant of that people.

Firm and strong at 1.40 centimeters tall, my great-grandmother Purépecha is an elder in her community and knows how to speak her native, endangered language — Photo: Personal Archive/Via BBC

Born and raised in California, USA, I grew up not knowing this part of my heritage, which was lost in my family with the death of my grandfather in 1978. My grandmother was left with five children and no income. But after a lot of savings, she took my father and his brothers from Mexico to the US in 1983.

The pressure to integrate into the new country made my father disconnect from our purepecha culture. Only recently, when I started to get curious about my identity, did I start asking him about our past.

Until, in 2021, when I was 31 years old, he brought me to Michoacán for the first time. That’s when I met my uncle Israel, who told me that not only are we purépechas, but that my great-grandmother, Juana, was still alive and living in the small village of Urén, nearby.

The Purépechas were one of the only indigenous groups in Mexico that the Aztecs failed to conquer.

When people think of Mexico before the arrival of the Spaniards, they automatically think of the Aztecs. But what they don’t know is thatand the Purépechas lived at the same time—and their kingdom was so powerful that they were one of the few indigenous Mexican groups that the Aztecs failed to conquer.

In fact, that’s what Mexicans generally know about purépechas, according to Fernando Pérez Montesinos, a professor of indigenous environmental history at the University of California, Los Angeles.

The Purépecha community agreed to cooperate with the Spaniards to build the Basilica of Our Lady of Health in Pátzcuaro – Photo: Personal archive/Via BBC

Steady and strong at five feet four, my purepecha great-grandmother is an elder in her community and lives in a humble, weathered home with cement walls.

She speaks the native language, an endangered heritage in a country where the official language is Spanish. Mexico has an estimated population of 128.9 million, of which 124.8 million — 97% — speak Spanish as their native language and only 175,000 speak Purépecha, all in the state of Michoacán.

Talking in great-grandmother Juana’s kitchen, I observed everything I could: how she cooks without electricity or a stove; its rows of clay dishes; and the deep stone pit in the middle of the room where she brews a huge pot of nixtamal—corn seeds specifically processed to make tortillas.

Excited by the new knowledge about my ancestors, I asked her where I could learn more about my purepecha heritage. She stirred the food and gave my uncle an authoritative look, telling him in Spanish, “take it to Pátzcuaro.”

The next day, we were in the basin of Lake Pátzcuaro—my uncle, aunts, and cousins ​​me, looking in wonder at the monuments our ancestors built in honor of deities like their sun god, Curicaueri.

Between the 14th century and the beginning of the 16th century, the Purépechas dominated western Mexico, with an estimated population of over a million people. Tzintzuntzan was the capital, where the irecha, the ruler, lived. At the same time, the Aztecs dominated central Mexico, while the Purépecha empire prevented them from conquering the territories to the north and west.

According to geographer Jahzeel Aguilera Lara, a researcher at the National Autonomous University of Mexico, “the yácatas of Tzintzuntzan — the ‘place of hummingbirds’ (in Purépecha language) — are the best preserved pyramidal structures in the region.”

“In addition to learning about the public architecture of the Purépechas, (visitors) also learn about the way the Purépechas understood the world and the importance Lake Pátzcuaro had for them,” says Aguilera Lara.

The empire chose this region for a reason: the basin is home to a colossal lake with several habitable islands, full of fish and lush scenery around it, with mountains covered in pine trees. The region is so spectacular that the Purépechas believed that the lake was a gateway to paradise.

“This is a very important region for the emergence of purépechas in the pre-colonial era of our history,” says Sandra Gutiérrez de Jesus, a Purépecha native and professor of Latin American studies at California State University in Los Angeles. “It was a setting for gastronomic, cultural and linguistic meetings and exchanges.”

When the Spaniards arrived in the basin of Lake Pátzcuaro, between 1521 and 1522, they captured the Purépecha ruler and forced the empire to abdicate its power.

Still, Pérez Montesinos explains that historians consider this transition to be more peaceful than the Spanish siege of the Aztecs. The Purépechas achieved more autonomy than the Aztecs, and their elites continued to have influence and authority over the region.

“Nothing could be done without the permission or authorization of the Purépecha elites”, explains Pérez Montesinos.

One example, according to him, is the Basilica Church of Our Lady of Health, built in Pátzcuaro around 1540.

“Conventional knowledge is that [o bispo] Vasco de Quiroga built the cathedral, but it was the work of the Purépecha’s hands,” says Pérez Montesinos. He explained that the Spaniards did not have to use forced labor to build the cathedral, as the Purépecha community agreed to provide their labor.

“There is this strongly dominant narrative of trying to diminish the day-to-day achievements of the Purépecha people — highlighting that it was the Spanish friars who taught them how to make these crafts, but faced with daunting challenges, the Purépechas incorporated new things into their lives to make something original. “, he counts.

As we traveled across the state, I began to see touches of Purépecha architecture. As Michoacán is rich in oaks and pines, the Purépecha empire was known for its skill in wooden constructions – most notable were the traditional wooden houses called trojes.

With colonization, the Purépecha people incorporated their manual work into the Spanish colonial infrastructure, which remains to this day throughout the Michoacán region.

As the Purépechas managed to retain much of their autonomy, their three administrative centers of power — Tzintzuntzan, Pátzcuaro, and Ihuatzio — remained economic centers throughout the colonial era.

“I lived in Pátzcuaro all my childhood and it is the most beautiful place to visit for the history of purépechas. There is no other place like it,” said my uncle.

When we arrived at the city’s Plaza Grande, there was a celebration of the Purépecha culture, as happens every weekend in Pátzcuaro. Teenage boys performed a traditional dance, the Danza de los Viejitos (“Dance of the Old Men”).

They were dressed in white and wore colorful handmade beanies or straw hats topped with vibrant rainbow-colored ribbons. They would stand there with their canes and strange masks of older men until they started tap dancing.

This pre-colonial dance was originally performed by the elders as part of a ritual for the ancient gods. But after colonization, the Purépechas used dance to mock the Spaniards. Hence, the dancers wear funny masks during their exaggerated imitation of the elderly men.

Although the empire acquired enormous power and left this incredible legacy behind, the purépechas were almost forgotten in Mexican history, overshadowed by the Aztecs.

“This has more to do with how Mexican nationalism emerged in the 19th and 20th centuries. Everything is centered around Mexico City and the narrative of Mexican identity was built primarily on the legacy of the Aztecs,” according to Pérez Montesinos.

“And as there are more narratives of battles, wars and resistance against the Spaniards, there is much more material [entre os astecas] for an epic story, while you don’t have the same kind of drama with the purépechas.”

I returned from Michoacán as a different person, proud of this new knowledge about my ancestors, their culture and their traditions. I was so excited that I went back to Mexico six months later with my dad and sat down with my great-grandmother to pick up where we left off.

“Can you teach me purépecha?” I asked. Great-grandmother Juana pointed and replied: “he can teach you”. I turned back and realized she was pointing at my dad.

“What? Can you say purépecha?”, I asked, in disbelief. He laughed and replied: “that was a long time ago, I knew, but I don’t know anymore”.

Juana replied: “you can teach her. Nobody ever forgets, this is our culture.”

Previous Group takes guard hostage and invades CPFL substation in Sumaré | Campinas and Region
Next Percy Jackson Actor Says He Won’t Appear in a Series: “They Don’t Want Me”