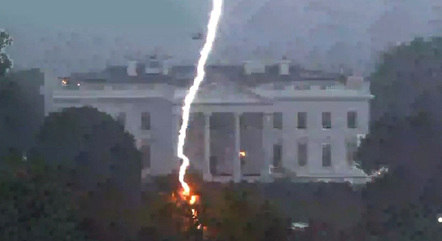 The death toll from the impact of lightning that struck last Thursday (4) near the White House rose to three on Friday (5), including a couple who traveled to the US capital to celebrate their 56th anniversary. of marriage, according to the police.

Lightning struck near the equestrian statue of the seventh US President Andrew Jackson, located in Lafayette Park, north of the White House, during a sudden summer storm.

As a result of the impact of the lightning, four people, two men and two women, were seriously injured, said Vito Maggiolo, spokesperson for the fire department of the US capital, at a press conference last night.

Authorities believe the four were taking shelter from the rain under trees when lightning struck them, according to Maggiolo.

The victims were so close to the White House that the first to provide medical assistance were agents patrolling the park and members of the Secret Service, charged with guarding the presidential mansion.

The four were taken to hospital on Thursday in critical condition. On Friday afternoon, Washington municipal police confirmed the death of a 29-year-old man whose identity has not been released out of respect for his family, which is being notified of the death.

Police also reported this morning the death of a couple from Janesville, Wisconsin: James Mueller, 76, and his wife, Donna, 75.

The two met when they were in high school and traveled to the US capital to celebrate their 56th wedding anniversary, according to Fox News. In a statement, White House spokeswoman Karine Jean-Pierre expressed “sadness” at the “tragic” deaths.

“Our hearts go out to the families who have lost loved ones, and we pray for those who are still fighting for their lives,” the spokeswoman said.

The person who is still hospitalized for injuries from the lightning is a woman, but her identity has not been released.

The US National Weather Service warns that lightning often strikes tall objects, so it is not advisable to take shelter under a tree during a thunderstorm.

On average, about 23 people are killed by lightning a year in the United States, according to the National Lightning Safety Council, a group dedicated to lightning awareness.

The organization said Friday’s three deaths in Washington were the first to be caused by lightning since 1991, when a teenager died and 10 others were injured.

Previous Without Caio Paulista, see numbers for Cris and Pineida, options for the side
Next Rogério Ceni, from São Paulo, seeks his first victory against Flamengo as a coach | Sao Paulo