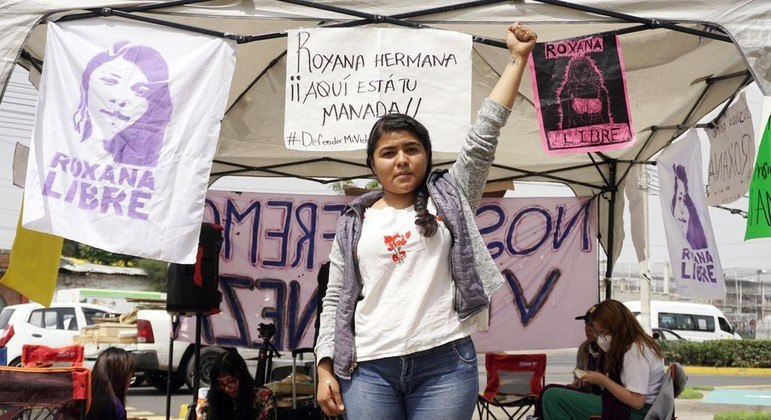 Roxana Ruiz Santiago, 22, had her life changed forever on May 8, 2021, when she survived sexual assault and attempted femicide, killed the rapist and spent nine months in jail, but that story is not over for her. . The young woman was arrested in 2021 for the murder of the rapist, and since then, she is awaiting the trial that will decide if she is guilty of the murder or if she will be acquitted for acting in self-defense. Ruiz’s sentence can reach up to 7 years in prison.

Born in Mexico, in the city of Oaxaca, she was released after a court decision on the condition that she not leave the state of Mexico, register her presence in court and justify her movements to the police. Ruiz gave an interview to El Pais where she told a little about how she feels about her current situation.

The young woman, who has a five-year-old son, fears for her life and the future of her son, in a state where more than 370 murders of women were recorded in 2021, the region even received an alert for gender violence by the high number of crimes suffered by women. Now Roxana is also part of the statistics.

”I didn’t want to kill him, if I hadn’t defended myself… if this guy had managed to kill me, my mother would be fighting for justice and I would be dead.”

Roxana is on parole, but the Public Ministry insists on asking for her return to prison, alleging that she defended herself excessively, at the same time, the victim’s defense demands that the case be judged considering the perspective of genre.

Due to her court case and the biased stories that came out in the media at the time of the crime, she ended up not getting a job after her release, where she was treated as a “relentless killer” by everyone in the prison, where she suffered new traumatic experiences, going hungry, being forced to sleep in the cell’s bathroom, and not receiving a mattress, just a blanket, among other things that Roxana preferred not to report for fear of what could happen to her.

She continues to fight for justice, today she receives support from feminist groups that welcomed her and follow the case alongside Roxana, who is demanding to be heard, and while waiting for the outcome of her story, she continues to lead protests for justice for her case, she does not accepts being imprisoned for defending her own life.

The 22-year-old woman is awaiting a decision from the public prosecutor on whether she should return to prison and await her trial, which will take place on September 1, 2022.