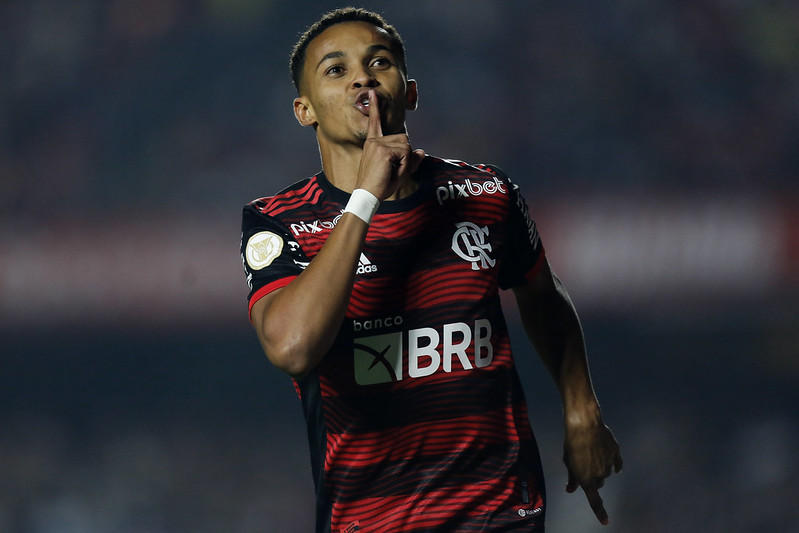 Flamengo opened the scoring early in Morumbi with a header from Lázaro. The team on the field is alternative, as the main players are being spared for the return game of the Libertadores quarterfinals, against Corinthians, on Tuesday (9), at 21:30 (Brasilia time).

Goalkeeper Santos is the only starter on the field so far, but Gabigol and the other starters are on the bench and can enter in the second half. Taking advantage of the youth categories, Flamengo fans saw a goal from the youngster assisted by Victor Hugo, another rising gem.

When leaving the pitch in the first half, Lázaro was asked by the Premiere team, which broadcasts the match, about the goal celebration, six minutes into the game. That’s because the young man raised his index finger to his lips, making the sign of silence inside the opponent’s stadium. However, the striker fled from any controversy.

“Regarding the celebration, that’s what I’ve been doing since the base. I know you guys like to add fuel to the fire, but it’s cool. I’ve always done this from the ground up. Happy for another goal, but it’s focus to leave with a positive result”, explains Lázaro.

Lázaro reaches the third goal in the Brasileirão 2022 for Flamengo

This was the player’s third goal in this Brasileirão. He also said that this is the result of the work he has been doing at the club and praises the first Flamengo stage in Morumbi.

“I’m happy for the goal, another one in the championship. It’s the fruit of my work. The team is to be congratulated for the first half. We know how difficult the game is. We have to respect São Paulo, which is a good team”, he adds.

Previous ‘The girl from Plainville’ series narrates real case that shocked the USA
Next Will Madame Web l Emma Roberts be Spider-Woman?