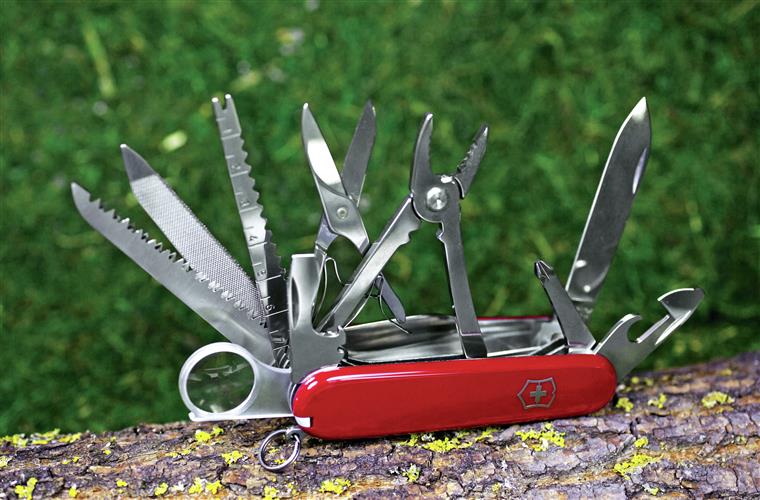 
As Nascer do SOL reported in its edition, which hit newsstands on July 16, there are shops in duty free areas at Geneva and Zurich (Switzerland) airports where Swiss Army knives of the famous Victorinox brand are sold, which can thus be taken on board the aircraft without any restrictions (unless the journey has stopovers or connecting flights). Something that violates all international safety standards, particularly in the Schengen area.

Nascer do SOL confronted the European Commission with such facts and concluded that there are ‘tight’ rules regarding the marketing of these objects, which are considered white weapons, and the stores located after the passenger baggage security checkpoint and cabin (duty free) are only authorized to sell objects with a sharp point or an edge with a blade up to 6 cm.

On the other hand, stores located before the screening point can sell objects of this type of any size, but those with a blade longer than 6 cm must be packed in the luggage that will go to the hold when the passengers carry out the respective check-in.

‘Restrictions relating to what passengers are allowed to carry into security restricted areas or on board aircraft are clearly stipulated in Commission Implementing Regulation (EU) 2015/1998. In accordance with point 4.4.3 of this Regulation, air carriers are responsible for informing passengers of the prohibited articles listed in Appendix 4-C, before the completion of check-in”, explained a spokesperson for the European Commission to Nascer do SOL. .

‘Air carriers can supplement the list of prohibited articles and passengers should consult the information provided by their air carriers before their journey. Generally, airport operators provide this information at airport check-in areas and also retailers operating at airports must provide clear and unambiguous information to passengers in their shops and on their websites», clarified the same official source from the European Commission, adding that “during control activities at European Union airports, the European Commission verifies compliance with the aforementioned rules”.

This is in line with the information that Nascer do SOL had already conveyed regarding, for example, the Humberto Delgado Airport. This is because, according to the Lisbon Airport’s official website, «in restricted security areas and on the plane, passengers are prohibited from carrying any type of weapon or tool, sharp or sharp objects, as well as substances considered dangerous», while the airline TAP specifies how passengers can find out about «the conditions for transporting weapons and ammunition in complete safety», adding that, for example, anyone traveling to Switzerland must bear in mind that «the transport of weapons is not allowed and ammunition considered ‘weapon of war’».

As you know, this topic is not new. As early as the early 2000s, several media were questioning the transport of this ‘white weapon’. And when we consult the websites dedicated to travellers, we find a lot of advice on how, «in general, pocket knives can be stored in checked luggage».

Victorinox itself explains: «According to airline baggage regulations, it is generally prohibited to carry dangerous objects in carry-on or checked baggage, or they may be subject to restrictions (…) In general, we advise you to store pocket knives pocket in checked luggage», reads on its official website.

Going back to the information contained in the ‘Implementing Regulation (EU) 2015/1998 of the Commission of 5 November 2015, which establishes the implementing measures for the common basic standards on aviation security’, we can read, about the luggage of cabin: «with the exception of applicable safety regulations, passengers are not authorized to carry the following items into the security restricted areas or on board an aircraft: pistols, firearms and other devices that fire projectiles (…) neutralizing devices (…) devices to stun and kill animals (…) sharp or cutting objects – which include ‘knives with blades longer than 6 cm’ and ‘scissors with blades longer than 6 cm’ measured from the axle’ (…), work tools, blunt instruments (…), explosives and incendiary substances and devices (…)’, while ‘passengers cannot have access to screened hold baggage. , except if s and handle their own baggage and are supervised to ensure that (…) no prohibited items listed in Appendix 4-C are removed from the hold and brought into security restricted areas or on board the aircraft ».

This topic, as mentioned, is nothing new, but it has been on the table more frequently since 11 September 2001. For example, in January 2004, on swissinfo.ch, in the article Swiss Army Knife comes from Schwyz, it read: “A cold wind is blowing on the swing of the Victorinox.

The seven lean years began in an apocalyptic way: through the images of the bombing in New York and the fall of the two twin towers. The terrorists who provoked the suicide attack were armed with carpet-cutting knives. From that day on, any type of sharp instrument became a weapon with deadly potential. Result: Duty-Free-Shops at international airports have stopped ordering Swiss Army Knives from Victorinox and passengers are now required to place their blades or any sharp instruments in safety boxes, right after X-ray controls, before being able to board. on the plane”.

It was also revealed that «knives account for more than 70% of Victorinox’s revenue», being mentioned that «in the fourth quarter of 2001, this fell by more than a third. Also in 2002, the decline in business continued: turnover stood at 250 million Swiss francs. For 2003 there are still no concrete numbers. However, the war in Iraq, the Asian flu and the economic crisis are factors that do not encourage consumption” and added that “on the contrary, expectations of an improvement in business are reduced even more”.

In March 2014, Correio da Manhã wrote: «It could have been a trip like so many others, the difference is that this time, actress Amanda Seyfried ended up ‘taking flight’ with a Swiss army knife in her suitcase», advancing that «the star of ‘Miserables’, already at the airport and prepared to travel, did not realize that she had the object in her possession, but the actress was not even called to attention, even after going through the security system».

“Amanda did not let the ‘distraction’ go unpunished and drew attention to what happened through her official Twitter page, with the following message addressed to airport security: ‘Dear TSA, this Swiss Army knife was not detected by security and I, without knowing it, I took it with me on board. Spooky!’. The TSA (Transportation Security Administration) is the US government agency responsible for the security of travel made in US airspace and has not yet reacted to the actress’ outrage».

Previous Taiwan is center of technology dispute between China and US
Next São Paulo intends to accept a proposal to sell Igor Gomes; understand

The cliffhangers are already classic and expected in a good season finale, but that doesn’t …