To travel around the world, the traveler always finds a way to get around. A good part of the group travels in motorhomes, Beetle cars, Kombi, SUV, among others — and motorcycles or even public transport.

There are also the more adventurous, who face the journey in alternative ways: there are people who go on foot, those who do it by bicycle, sailboat, at the base of the ride and there is the São Paulo man Felipe Fogaça (@10wheels) 27 years old, who traveled more than 5 thousand kilometers on roller skates.

A skating instructor since the age of 19, he crossed 17 borders, balancing himself on wheels — first on a bike and later on the equipment he adopted for most of the trip.

“I’ve always been very interested in inhospitable places. I wanted to travel with my own legs and spending as little as possible. I had in mind that it was impossible to travel on skates, so I decided to go by bicycle”, he says.

The initial project foresaw 50 months, 46 countries and 58,000 kilometers to be covered in the company of a friend, following a two-year plan that ended up changing completely.

As the trip went on, the colleague gave up and Felipe followed alone, adapting both the script and the way of traveling. After a year on the road, he saw that the idea of ​​skating wasn’t all that surreal.

Felipe left Sorocaba by bike in February 2018. He cycled through southern Brazil to Uruguay for a month and a half. In the neighboring country, he dedicated another two weeks to crossing by ferry to Argentina. There, he crossed the Andes Mountains still on top of his bicycle and arrived in Chile.

“I made the Atacama and ‘tried’ to cross the Eduardo Avaroa National Reserve, on the border with Bolivia”, he says. It’s just that, right there, he lived one of the hardships of the whole journey and what he considers the hardest day of his life.

“I climbed from San Pedro Atacama — at about 3,000 meters of altitude — to the border with Bolivia, in the Eduardo Avaroa National Reserve, with 4,500 meters of altitude. Licancabur volcano, I had a very strong headache and tiredness, in addition to being difficult to breathe”, he recalls.

Still, he entered Bolivia. The ground, hitherto made of asphalt, became earth, making it difficult to move around. The thermometer marked -5 ºC in the afternoon and the expectation was that the mark would get worse at night.

“I cycled another 15 kilometers and camped next to the beautiful Laguna Blanca. When setting up the tent, I got up quickly, my blood pressure dropped a lot and I fainted. That scared me. I put on my clothes, slept a little more and woke up again, this time with only my feet cold”, he details. In the Andes, still on a bike 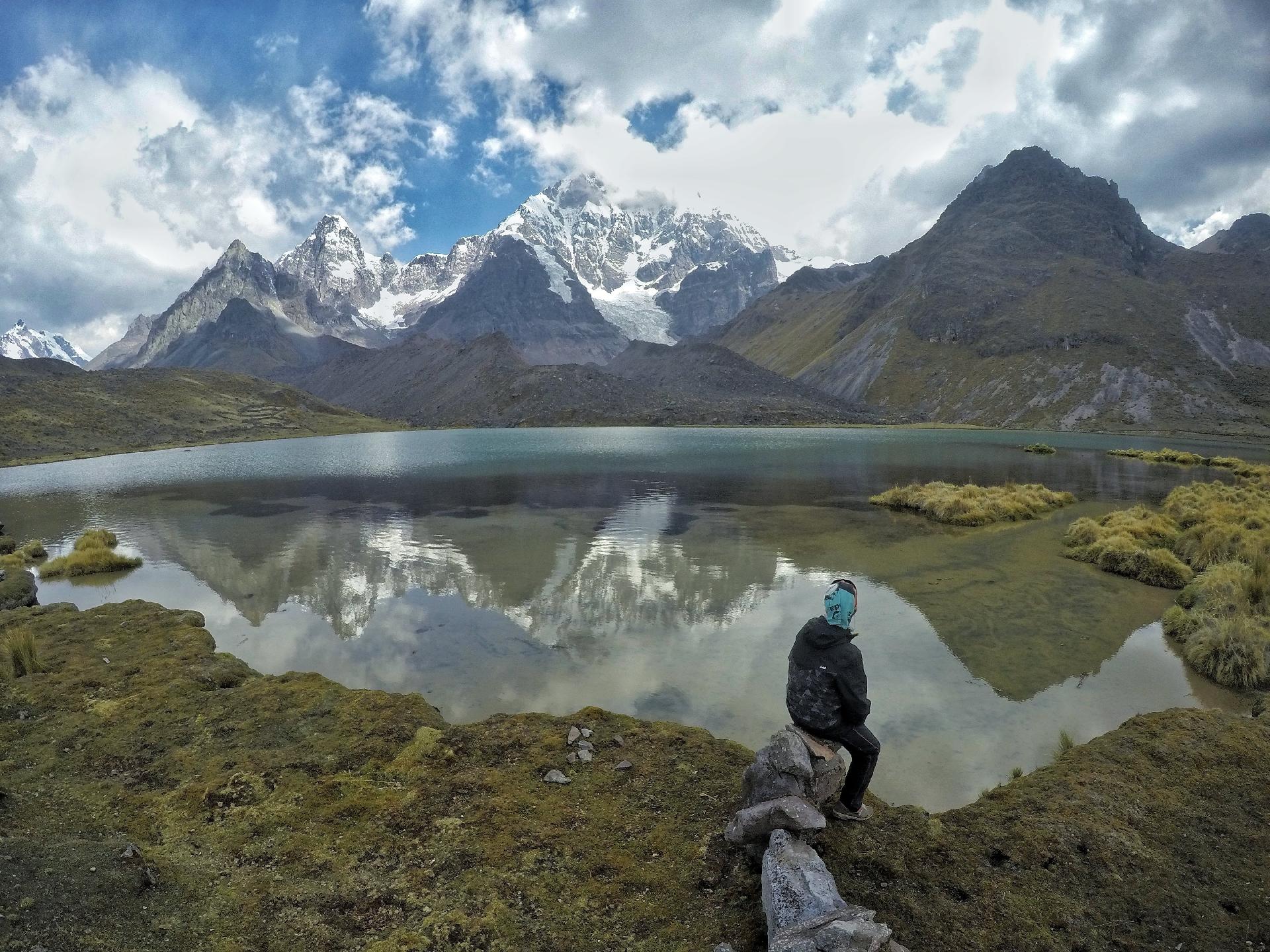 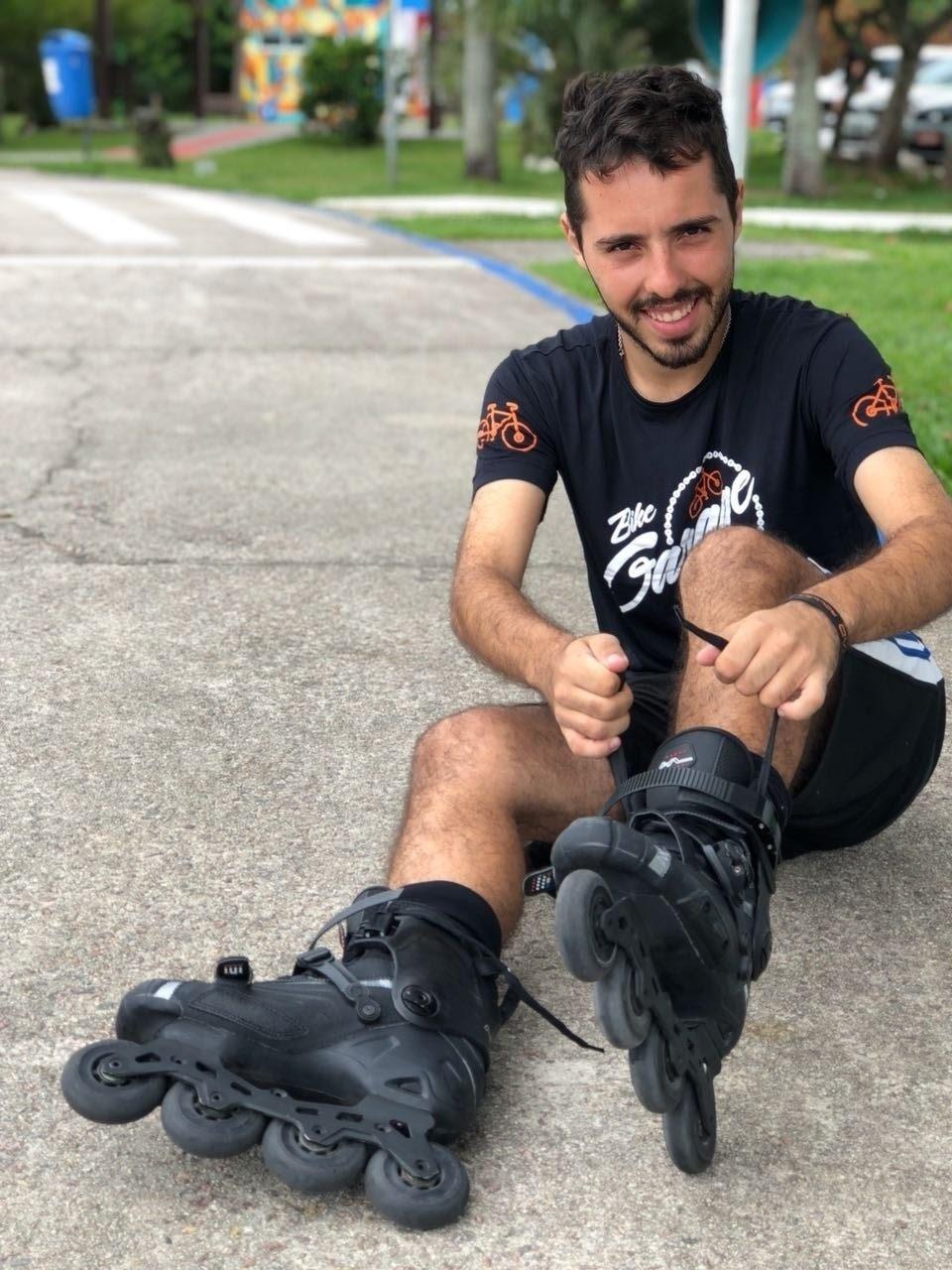 At Praia do Cassino, in Rio Grande do Sul In the Sahara desert All the socks and coat were not enough to assuage the sensation and the night began to be cut into naps. Felipe began to experience difficulty breathing.

I was very desperate during those hours inside the tent. All I expected was for the sun to come up soon, bringing a little calm,” he reveals.

It took a month in Bolivia to recover from the situation, traveling at a much slower pace and trying to get used to the altitude. It was precisely there that he decided to give up the bike. “For everything I’ve been through, I put into practice the idea of ​​traveling only on skates”, he says.

From Peru to Thailand

With the bike shipped to Brazil, Felipe had only the training wheels under his feet to get around. From Bolivia, he left for Peru, where he stayed for three months. The distance was no problem — from the border to Cusco alone, it was about 500 kilometers. “For the first time, I was doing something without much planning and I was carrying my things in a backpack, which gave me a lot of back pain,” he recalls.

For two months, he settled in the capital to get to know the surroundings and took the opportunity to work in two hostels. He went to Machu Picchu and made a trail that he considers “surreal” to Choquequirao, sister city of the famous archaeological site. While in the Andean country, the opportunity arose to work in Thailand as an English teacher.

Felipe had no doubts about giving up the idea of ​​going to Colombia and went straight from Lima to Bangkok, where he established himself for almost half a year in a profitable activity that was very different from what he was used to.

Even from a distance, Felipe closed a partnership with the Brazilian rollerblading company Rolling Sports, having access to more suitable equipment, which only needed to change wheels to face off-road surfaces. So, he put aside the shoes with four slalom wheels that had accompanied him until then.

Despite this, the backpack and backache were still trouble, until he encountered a young man from Singapore who was traveling on a skateboard, pushing a baby stroller. He copied the idea and adopted the “vehicle” to carry his luggage.

Another detail is that, when he left Sorocaba, he carried 40 kg on the bike.

I took ‘life’ with me. Did you have a stove, kitchen utensils, cones, computer? I even took a Rubik’s Cube to distract myself. I learned on the road that I didn’t need half the stuff and I cut it down a lot,” she says.

The cart started to accommodate only what is important: tent, sleeping bag, thermal insulation, tarpaulin, spare wheels, tools, water filter, locator, 5 changes of clothes, a sweatshirt, raincoat and camera. There are 18 kg in the cart, which weighs another 11 kg.

With the job finished in Thailand, he left for South Korea. In two months, she crossed the country. Another month was dedicated to Mongolia, skating alongside frozen rivers and wild horses, one of the places that captivated him the most.

“I caught a sandstorm there. The temperatures dropped to -9 ºC. Luckily, I had seen this phenomenon in the forecast and decided to take a lodging in a village. I only followed it after it was over”, he recalls.

From Asia (which also included a visit to the Great Wall of China), Felipe flew to Europe. He spent two months skating through Russia, Estonia, Latvia, Lithuania, the Netherlands, Belgium and France.

When he was in Holland, he even had a not-so-comfortable experience for those who travel outdoors. Camped in a clearing inside a forest, even from inside the tent, I saw everything lighten up on a big storm day.

“All I had left was to lie down, stay calm, hope that lightning didn’t strike me or the trees over there and try to appreciate the beauty of the chaos”, he argues.

In the three Baltic countries, he skated in late spring, when the sun rose around 4 am and set around midnight.

It made me have sooooo much time to do everything I wanted. I skated all day. It was 3 consecutive days of 100 kilometers, with time to have a quiet lunch and find a place to camp, without rushing”, he says.

He decided to return to Brazil to see family and friends and, in a short time, embarked on a new dream: to cross the Sahara desert, where he skated up to 10 hours a day, on inhospitable roads.

camping along the way

Comfortable beds to rest your body after hours of skating? None of that! Felipe usually goes camping when he travels. So he doesn’t have to worry about or rely on hosting — only when he really needs it.

At these times, he usually looks for flat places, close to the road and with minimal chance of being seen. Thus, it has ended up in forests, hills and deserts. When he’s in a small town, he usually asks for directions to camp, but he’s even slept at bus stops and at the fire station in several places around the world.

Detail: Felipe prefers less crowded places. For him, the worst thing about logistics is precisely when he needs to cross large cities. “The ‘heap’ of cars is something complicated. In addition to the fear it causes, it stresses a lot. That’s why I prefer remote places”, he says.

Dealing with not having company most of the time is no problem either.

I love being alone. One of the things that makes me feel alive is being able to experience it with myself. getting to know myself better and having to fend for myself,” he says.

Main Learning
the skater and traveler shares some lessons he learned on the road:

Previous UN: There is ‘real risk’ of nuclear plant disaster in Ukraine | Ukraine and Russia
Next Even cancelled, producers are still working on a sequel to Scooby! The film