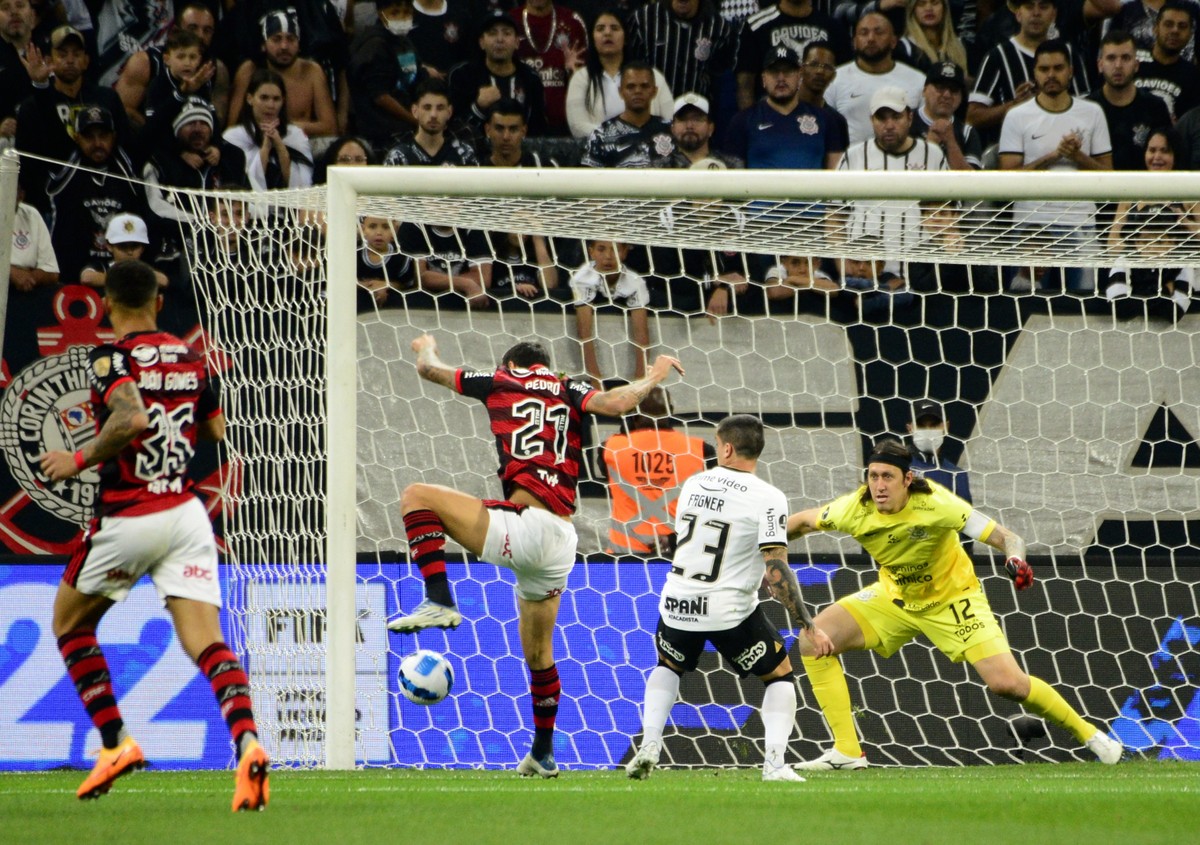 Flamengo vs Corinthians: analysis shows probability of victory for each team in Libertadores | statistical spy

Flamengo and Corinthians will face each other this Tuesday, starting at 9:30 pm, at Maracanã, for the return game of the Libertadores quarterfinals with wide favoritism for Flamengo, but with Corinthians’ hope apparently deposited in crosses: not to mention penalties and fouls. of the last ten goals conceded by Flamengo, five came from crosses, with opponents attacking from the left, right of Flamengo’s defense. Of the last ten goals scored by Corinthians, five were also scored from crosses, but only two of them from the left.

Pedro is face to face with Cássio in the first leg of the Libertadores quarterfinals — Photo: Marcos Ribolli

In partnership with economist Bruno Imaizumi, we analyzed 88,889 shots registered by Espião Statístico in 3,629 Brasileirões games since the 2013 edition, which serve as a parameter to measure the current productivity of teams based on the goal expectation (xG), an internationally consolidated metric ( see the methodology at the end of the text).

From this metric, the probability of Flamengo winning is 64%, the draw, which also gives the classification to the Rio de Janeiro team due to the 2-0 victory in the first leg, has a 21% chance of occurring, and the potential Corinthians victory is 15%. But for Corinthians it’s not enough to just win, the team needs to at least win by two goals difference to take the decision to penalties, and statistically, this chance is much lower, around 3.3%. As it is football, it is possible, but rare.

When analyzing the retrospect between the teams in charge of Flamengo in Serie A from 2006 onwards, in the points scored with 20 teams, it is evident why the Carioca favoritism is so great: in 15 games, Flamengo won ten, and Corinthians, two, with three draws.

This season, in the last six games played, Flamengo also has a superior performance, with 89% against 56% for Corinthians.

In this year’s edition of Libertadores, Flamengo has the second most effective attack in the competition, with a goal scored for every 4.8 completions (121 shots and 25 goals).

Corinthians has a goal every 18 attempts, fifth worst efficiency in Libertadores. The offensive pressure of each team yielded an average of 4.9 corners for Flamengo and 2.3 for Corinthians.

To make the Corinthians mission even more difficult, Flamengo did not concede a goal in six of the eight games they played as home team in the two-month period, 75% of the total. If Corinthians qualify, it will be an event as historic as the Corinthians invasion of 1976, when they eliminated Fluminense in the semifinals of the Brazilian Championship. It will be remembered for generations and generations.

Favoritism presents the potential that each team carries comparing the performance in the last 60 days as home or away in all competitions and in the last six games, regardless of home. Also considered are the defensive and offensive performances of the teams in the aerial and low game. The calculations referring to the influence of high balls and the exchange of low passes between goals scored and conceded only consider the characteristics of goals scored in plays. Olympic goals, penalty kicks and direct free kicks do not count towards determining aerial or ground influence as they are kicks made directly into the goal.

We present the statistical probabilities based on the parameters of the “Expected Goals” or “Goals Expectation” (xG) model, a metric consolidated in the data analysis that has as a reference 88,889 shots registered by the Espião Statístico in 3,629 Brasileirões games since the edition of 2013. We consider the distance and angle of the shot, as well as characteristics related to the origin of the play (eg, whether it came from a cross, direct foul, or a steal), the body part used, whether the shot was made first, the difference in the market value of the teams in each season, the playing time and the difference in the score at the time of each shot.

A player’s performance is compared to the average for his position, whether striker, midfielder, midfielder, full-back or defender, and we consider what would be expected of the shot if done with the “good foot” (the right for right-handers, the left for left-handers) and for the “bad foot” (the opposite). The ambidextrous, which kick approximately the same number of times with each foot, were identified.